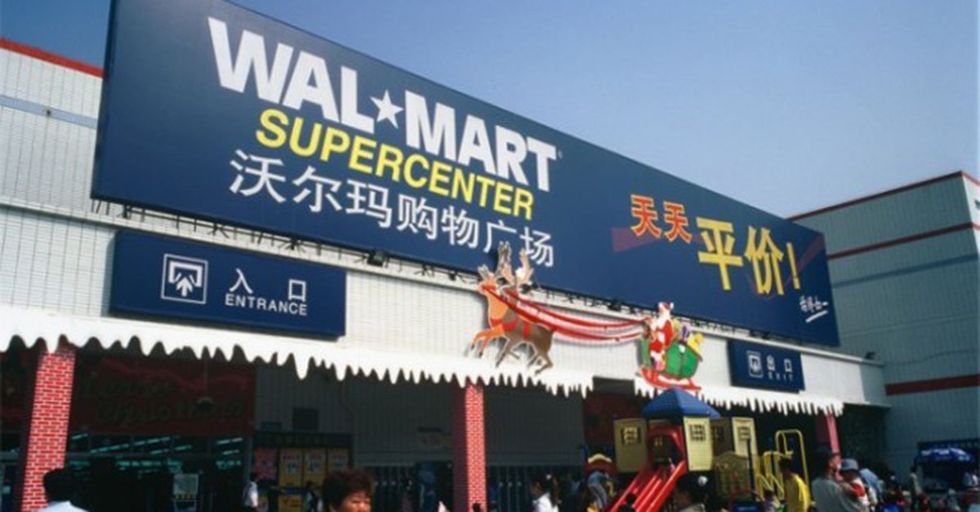 You might think of Walmart as a uniquely American retail store, but the giant corporation has made its way to China, and...

...there's NOTHING American about the stuff they sell there. They sell $1 liquor, fancy stuff, and all sorts of crazy animals and meats that you'd probably want to keep off your plate. Take a look at how things get weird when Walmart crosses the Pacific.

Here's the megastore from the outside. Seems familiar enough, right?

Well, one step inside you'll catch sight of some frozen alligators and realize things are a little...different here.

This guy's got an apple in his mouth. Cute?

You'll see lots of weird combinations of products, like batteries and Snickers bars. I guess for when you need two types of energy.

The meat department at this one is a little more "in your face" than we might be used to.

That's a bin of live frogs. I bet that can be...problematic.

Here are some cohabiting with turtles.

You know what goes great with orange juice? Corn oil!

A personal-sized watermelon is actually a pretty cool idea.

If you'd rather have your alligator vacuum-sealed...they got ya covered.

An understandably wide array of chopsticks.

Many, many, many different types of eggs.

"Anti-bacterial" men's underwear, whatever that means.

Beef candies, if you're so inclined.

Powdered horse milk is something you won't find on shelves stateside.

Can anyone explain how "diet water" works?