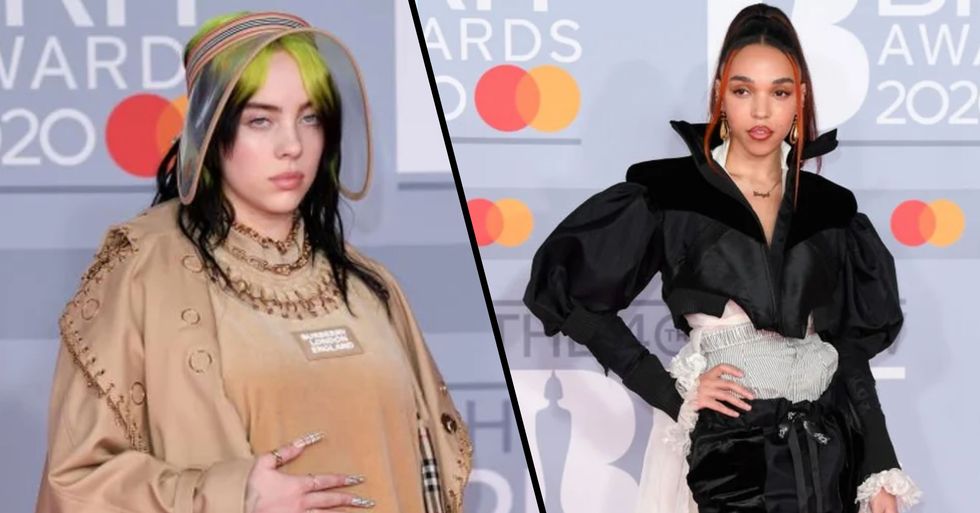 Another awards ceremony means another red carpet - and that means some incredible (and incredibly badly) dressed celebrities. Last night's Brit Awards gave us some triumphs (Maya Jama's look will go down in awards ceremony history) and some unmitigated disasters (Kendall Jenner looked particularly uncomfortable). Curious about the best and worst dressed celebs at the 2020 Brit Awards? Keep on scrolling for all the details.

This sheer patchwork dress made for an exciting choice.

The singer managed to err just on the right side of sickly sweet.

The model proves that an LBD doesn't have to be boring.

2 bald men are the perfect accessory.

It's a little bit Halloween - but at least it's not boring!

Her award ceremony looks are getting a little predictable - but we do appreciate a girl who has her own sense of style!

The Love Island star pulls off two cool looks in one!

She seems set too be a huge star - particularly if this red gown is anything to go by.

The model kept things chic in this angular black mini.

You can always count on her to smash the red carpet.

Love the dress - although we're not quite convinced on that hat.

Proving once more than male red carpet fashion doesn't have to be boring!

We have to say we think she wins outfit of the night.

Who would have thought one single skirt would make such a great red carpet look?

This simple gown is elevated by its unusual lime hue.

We have to say, the boys really brought it.

Sequins, feathers, and lime green silk. Shouldn't work, but it does.

Props to her for taking risks with this vintage aesthetic.

Because there's nothing wrong with a little cheese!

Simple and chic in blue velvet.

He was the star of the show - and this white outfit proves it. And now we've seen the best, let's see ... the rest.

Black and silver chains always run the risk of erring on the side of tacky.

A brown bra will always make for a questionable choice ...

We're really sorry, but we could have done without that scarf.

Like an optical illusion - but not a great one.

It breaks our heart to say it - but we just don't like this dress!

This just looks thrown together!

This is just too costume-y for our tastes.

Newsprint is pretty difficult to get right.

There's nothing wrong with it - we just feel kind of ... bored.

What was she thinking when she selected a green holographic catsuit? Want more red carpet scandal? Scroll on for the most shocking dresses ever worn!