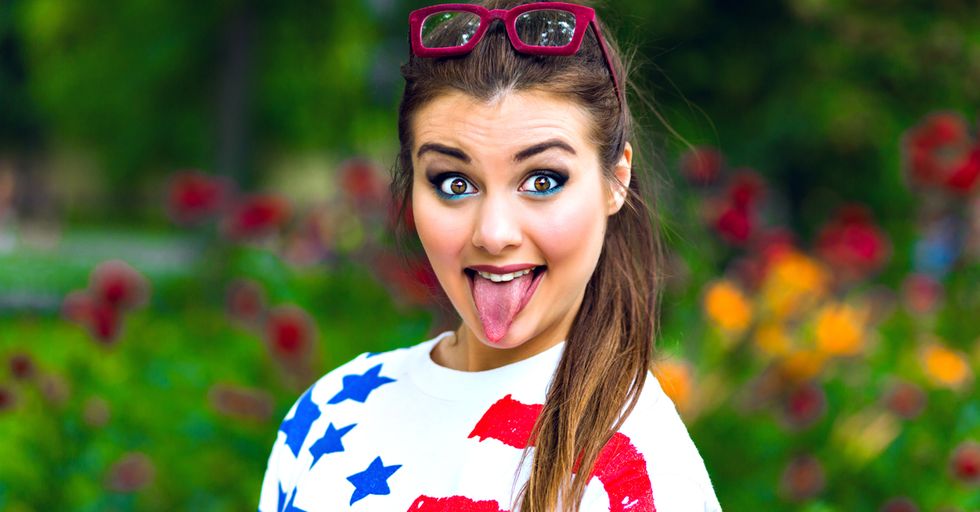 Here Are the Absolute Worst Things About Every State

There are pros and cons to every single place in the United States, from having a really cool roadside attraction or great weather to having ridiculously high taxes or pollution. It's your call what you value most. But Thrillist decided to find the one key area in each state that is basically the worst thing about it.

If you disagree, don't shoot the messenger here — unless you're in South Carolina, as apparently that's a fairly popular past time. But feel free to debate in the comments.

Stick up for your state, people!

They're one of the few states to raise the smoking age to 19, but apparently this measure is working about as well as putting a fish on a bicycle.

In the state with the lowest population density that also has the coldest average temperature, I guess people are just looking for any warm body to cuddle up to. But come on, now. No glove, no love.

Arizona: Worst at going to the dentist.

Almost 60 percent of residents reported that they never go and open wide for a good cleaning. I know a lot of people retire there and probably have dentures, but that's still kind of gross. Plus, you get free floss and a new toothbrush. Win-win!

Less than 20 percent of residents have a bachelor's degree or higher, but hey, at least they're not known for chlamydia.

The air in Los Angeles is thick with smog and the egos of countless celebrities, but apparently the air also sucks in Bakersfield, Modesto, Sacramento, and Fresno.

And all this time I thought people were talking about skiing and snow when mentioning fresh-cut powder.

They have the highest rate of school enrollment, but apparently that translates to also having the top 1 percent in Connecticut earn 41 times what everyone else earns. Can I catch a lift in your jet?

According to a Gallup poll, less than half of people from Delaware report exercising for 30 minutes a day, three times a week. Dela-where? Not at the gym.

Well, given how old people drive cars in Florida I guess putting them behind the wheel of a boat isn't all that much different. Or maybe it's just drunken kids on spring break. Not a huge surprise.

Politicians in Georgia are the least ethical in the country, with an estimated 658 state workers having accepted gratuities during a two-year period. In other words, they really love your peaches and want to shake your hand with a few dolla bills, y'all.

Apparently there are those who are moving so slowly that they’re judged as rude, and the aggressive drivers who speed around them and flip them off. Together, with their opposite yet equally vexing styles of driving, they push Idaho to the top of the rankings. You say "potato," they say "stick it where the sun don't shine."

This is due in part to the fact that it has the second highest number of railway crossings in the country, after Texas. All aboard!

I would have thought New Mexico, given Breaking Bad, but what do I know? Not meth, apparently.

Black and white Iowans use marijuana at about the same rate, yet black Iowans are eight times more likely to be arrested for marijuana possession. For those not good at math: that's a lot.

There's a reason things changed from the black and white of Kansas to color when Dorothy finally got out of that place in The Wizard of Oz.

Kentucky: Worst place to be an animal.

They consistently rank lowest when it comes to animal protection. Is it a coincidence seeing as there is also Kentucky Fried Chicken?

Think twice about where you're stumbling around after a Mardi Gras night out and be careful throwing those beads at people.

Really? This is the worst thing about your state? Must be rough.

Maryland: Worst at incarcerating the elderly.

Only 7.5 percent of all the state's inmates are over the age of 50, which is about half the rate nationwide. In other words, old people can literally get away with murder...kind of.

They were the first state to ban happy hour in 1984. That means for 30 years, they've had to pay full price to sip and complain about their bosses after work.

Apparently the state of 10,000 lakes is also the state of the most tornadoes (probably not 10,000, but still more than Texas and Kansas).

If you live in Mississippi, you're only going to live for 75 years, on average. There are 11 states in the Union in which residents are expected to live to at least 80 years old, a full five years more than Mississippians get. So, long story short, move out of Mississippi.

Montana: Most traffic fatalities per capita.

Back in the late '90s, Montana actually abolished speed limits during the day, which is just as bad of an idea as it sounds. Then they were reinstated and yet highway fatalities jumped 17 percent last year. Buckle up, buttercup.

If you're looking for a coffee table that you can say was made in Nebraska, your heart will likely be broken. Try and move on with your life as best as you can.

What happens in Vegas stays in Vegas, except the marriage bond between those that hit up an Elvis-themed chapel to tie the knot.

Apparently, there's not a whole lot to complain about in New Hampshire. But if you're trying to navigate the state via boat, you're pretty much out of luck. Maybe commiserate with those in Maine who can't land their helicopter.

You would think it would go to Montana, but nope. New Jersey has a speed trap every 30 miles, the most in the nation, and it collects $30,000 per mile in road user fees. And if you get caught doing even 10 mph over the limit, your fine can be doubled for "racing." Zoom, zoom.

And the award for most reckless goes to: New Mexico! (Who will get into an accident on the way to receive the award.)

New York: Worst to be a taxpayer.

New Yorkers pay the highest average state and local taxes, at a whopping $9,718 per year. That's 39 percent higher than the national median. In other words, the Big Apple is a big bank-buster.

They were determined to be the worst state for education based on a number of factors such as education spending, student-to-teacher ratio, and percentage of kids who apparently aren't studying.

If you hate tourists in your lonely, unexciting state, then perhaps North Dakota is the place to move. Parking won't be a problem.

There's is literally something in the water, at least in the water from Lake Erie, I guess. Buy some bottled and sip wisely.

While Oklahoma's fast food titan, Sonic, offers 462,908 different drink combinations and sells roughly 3 billion Tater Tots a year, not many other fruits and vegetables are making their way into those meals. Maybe swap in a salad, guys.

Maybe they have a fear of dying of dysentery on The Oregon Trail.

More than half of Rhode Island teachers had missed more than ten days during the school year, and one in five had missed at least 20 days of school. In other words, if you like having a substitute teacher you can throw spitballs at, move to Rhode Island.

The rate of violent crime is at 766 per 100,000 residents, so I guess that whole concept of Southern hospitality has flown the coop.

The good news? You're not alone! Everyone gets paid less in South Dakota, but especially educators. And you get more bills...and YOU get more bills!

And not in that cool Michael Jackson "Dangerous" moonwalking kind of way, but in that "don't walk anywhere alone unless you want to take a dirt nap" kind of way.

It turns out everything is bigger in Texas, including drop-out rates and academic standards.

A study calculated the nerdiest state based on public Facebook likes, so maybe people here just spend more time oversharing on social media. Then again, if they're openly nerdy and don't pretend they're cooler than they are like everyone else, they kind of deserve the award.

Vermont: Most illicit drug use.

This could be linked to the fact that it's also the state with the fewest children, meaning people are simply looking to ease the pain and loneliness of existence. Or rather there are no kids around and they want to party.

Alaska ranks highest in this category, but they also have chlamydia, so I think Virginia wins.

Not only do they have the lowest percentage of Bieber fans (6.82%), but it’s also home to Tenino High School, which once blasted Justin Bieber over the loud speakers between classes until students raised $500 for orphans in Ghana. Save the children!

West Virginia was one of only a few states where less than half of residents between 18 and 24 had at least some college experience. Not surprisingly, they also have a pretty low optimism level about the economy.

A shocking 12.8 percent of African American men are incarcerated in Wisconsin, nearly double the national average of 6.7 percent and 3 percentage points worse than the next-worst state, Oklahoma. Those are even worse odds than Favre returning to the Packers again.

Wyoming has the highest rate of suicides at 23.2 per 100,000 and is also the least populous state, hopefully not as a result. And on a serious note, if you're in Wyoming — or anywhere — there is help. But with that said, what say you, Internet? What is the worst thing about your state?