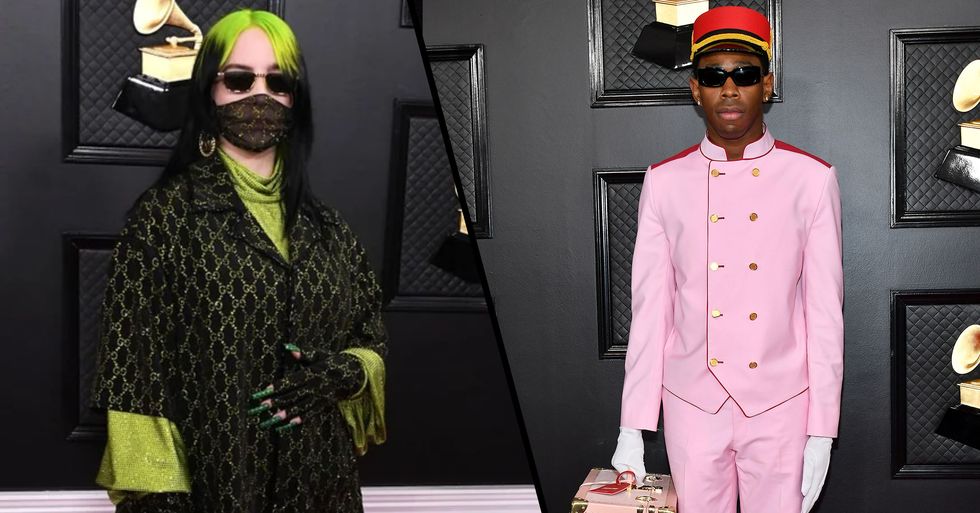 Last night saw was a big one for the world of music, as the biggest names in the industry flocked to the 62nd annual Grammy Awards. And of course, as our favorite A-listers hit the red carpet once again, there were a whole host of incredible (and disastrous) ensembles to feast our eyes on.

Although we have to say, the boys really pulled it out of the bag this year.

So, let's start off with the best dressed, shall we?

Kicking off the countdown with a bit of zebra print... you can't go wrong, can you?

The singer's prom-esque 2-piece gown was a real head-turner.

Red was a huge trend on the red carpet this year, and it seems Nathalie Joachim well and truly nailed it in this ensemble. Anyone else getting Villanelle vibes?

The guys really upped their fashion game at the Grammys this year, and Kirk Franklin's silver-grey suit was certainly no exception.

We're in love with the forest green on black combo!

This could have very nearly been a miss but Misty Copeland pulled off this unique gown effortlessly.

Billie Eilish tends to get a bad rep in the world of fashion, but we have to admit, this neon Gucci number is the perfect ode to her signature style. We for one, love it!

This red satin Prada suit is everything.

We can't get enough of the amount of satin we've seen on the red carpet this year. Keep it coming!

The Canadian singer's lace infused gown is fit for any princess.

Admittedly, it's a little basic but it works, nevertheless. We're in love with the floaty vibes combined with the one-shoulder look.

Next up we've got another suit. J.I.D really commanded our attention in this dramatic orange and black ensemble.

The star absolutely dazzled in this sparkly number as she attended the ceremony with her boyfriend, Finneas O'Connell (who also happens to be Billie Eilish's brother).

This is an example of a floral suit done right.

We're absolutely in love with this flattering color combo.

Victoria Monét never fails to amaze, and it seems this burnt orange gown proves she really knows how to steal the show.

From the glittery boots to the kimono, this is hands down one of our favorites from the night.

This pastel-toned coat is everything we didn't know we needed.

Lana Del Rey may like to keep it understated, but her stunning mall-bought dress certainly didn't fall short.

FKA twigs certainly isn't scared to be different. This hooded gown from Ed Marler might not be to everyone's taste but it's certainly a fashion statement.

The legendary country singer is giving us all the "my husband died in mysterious circumstances" vibes and we're here for it.

If you want someone who dabbles in the more daring side of fashion, Tyler is your guy. The star channelled full-blown chic bellboy in this custom Golf Le Fleur baby pink outfit.

We're finally into the top 5, which means serious business.  Chrissy Teigen looked as radiant as ever in sunset orange Yanina Couture.

The actress and activist blew us away in this strapless electric blue ensemble.

The king of the red carpet is back and he didn't disappoint. The actor treated us to yet another memorable look, rocking a turquoise sparkly jumpsuit. Not to mention the fact that his hat was motorized.

The songstress made a jaw-dropping entrance onto the red carpet in this dusky gray tulle-layered Giambattista Valli gown.

There was one celebrity who truly blew us away with their look this year and that was Lizzo. The singing sensation sported an old-Hollywood inspired Atelier Versace gown, complete with crystal piping and faux fur, making her a worthy winner of the best-dressed title. And now we’ve seen the best, let’s take a look at the … rest.

You usually can't go wrong with a plain black dress but this proves otherwise.

This metallic number really missed the mark for us.

What's going on in the center of that suit exactly?

We're massive fans of the oversized look but the fit of this just doesn't look quite right, which is a shame considering we love the baby blue color.

The tulle combined with polka dots isn't doing it for us.

The cut of this dress makes it come off as slightly cheap looking.

Something about this split-in-the-middle ensemble makes us very uncomfortable.

It's not overly offensive but the color sadly brings it down in the ranks.

Not a fan of the central split, sorry Heidi!

We get that he's not exactly known for dressing up, but the singer's ensemble was just plain lazy.

We hate to be that person but it's just not that flattering.

Sadly, the print let this dress down.

This looks like something you'd find on the sale rack in Forever 21.

It may be his signature style but it doesn't make it good. That tacky neon pink is painful to look at.

She may have gone simple but the shiny texture cheapens the look.

Red was a huge trend this year but sadly, Rhiannon Giddens missed the mark with this one.

Everything about this is just wrong.

This vintage Vivienne Westwood pantsuit and Agent Provacateur bra is a baffling combination, to say the least.

Leather is a risky one and sadly, it didn't pay off for Rosalía.

We have so many questions... starting with what are those shoes?

We appreciate that the YouTube star has gone for a more "out there" look, but this one failed to wow us.

Garish doesn't even come close. There's simply way too much going on.

The strange color combo and ill-fitting suit is a bit of an eyesore.

We'll be the first to admit to loving a bit of tulle, but this highlighter yellow ensemble doesn't do the trend justice at all.

From the poorly placed mesh to the low rise trousers... where do we begin on this fashion faux pas?

This black ensemble just completely drowns her out.

We had such high hopes for our fave Game of Thrones star but sadly, Sophie Turner looked more like a 2012 college frat party guest than red-carpet ready.