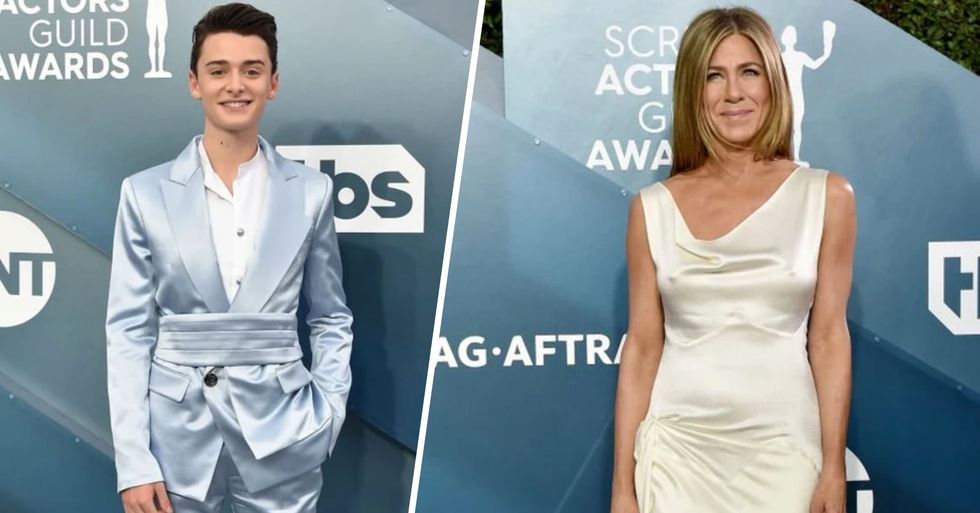 Last night saw was another big one for the world of TV, as the biggest names in the industry flocked to the 26th annual Screen Actors Guild Awards. And of course, as our favorite A-listers hit the red carpet once again, there were a whole host of incredible (and disastrous) ensembles to feast our eyes on.

So, let's start with our countdown of the highlights, shall we?

It may be simple but that color is to die for.

We're getting major Cinderella vibes from this ensemble.

Florals can be risky, but in this case, the risk well and truly paid off!

This Dolce & Gabbana ensemble was a huge showstopper.

You can't go wrong with a classic black dress... especially if you're JLo.

We'd never have a bad thing to say about Jen An, and it seems this white silk Dior number is no exception.

The hair. The makeup. The gown. Michelle Williams really did come out to serve.

Satin was a key trend on this year's red carpet and it seems Scarlett Johansson wanted in, donning this gorgeous Armani Privé gown.

This is one of those that shouldn't work but really does.

The contrast of black and white can certainly be a fashion plunge, but Lili has come out on top.

This ultra-feminine Giambattista Valli was definitely an example of florals done right.

Julia Butters may only be 10, but she sure knows what a good red carpet look is. This metallic suit is a true frontrunner of the night.

This is definitely one of those love it or hate it outfits. We happen to love it.

Props to Nathalie for making such a statement (especially with that bow).

Millie Bobby Brown is only fifteen yet has one of the best eyes for fashion we've seen. This look is one of our faves of the night!

This vibrant gown really brought all the fun (and fabric) to the red carpet.

The Riverdale star wowed in this champagne Ralph & Russo gown.

The guys often get overlooked when it comes to best-dressed lists, mainly because they tend to just wear the usual black suit. But Noah Schnapp really stole the show rocking this satin baby blue Balmain tuxedo.

There's nothing we love more than an oversized statement sleeve. This look is simply stunning.

Kathryn Newton took our breath away as she stepped out in tangerine Valentino. The plunging neckline, statement sleeves, and smock dress design all meant that this gown was a clear winner of the night. And now we’ve seen the best, let’s take a look at the … rest.

Sadly, Reese's Celine dress just missed the mark for us.

This looks like one of those cheap metallic pleated skirts you'd find on the store sale rack.

This is giving us major sweet sixteen birthday bash vibes... and not in a good way.

Props to her for being a bit more daring with her look, but we have to admit, we aren't a fan of the neckline combined with those feathery textures.

This honestly looks like someone recycled some '70s carpet and made it into a dress.

Sadly, the sequins and flowy fabric kind of make this dress come off as cheap.

This metallic Dior number was a little aging for the Stranger Things star.

The shape of this gown is a huge fashion miss for us.

It's just a bit boring.

Those collars should have been left in 2013.

That pattern is unforgivable.

Something about paring those gloves with that dress really doesn't sit right with us.

Overall just not a fan...

Anyone else getting Ashley Tisdale red carpet 2007 vibes?

The silhouette on this suit is just all wrong.

Too much going on. Period.

Is this a beach cover-up? Or a Coachella outfit? Either way, it shouldn't be worn on the red carpet.

We hate to be that person but this just doesn't look right at all.

It's just too loud for us.

There is nothing okay about the cut of this dress.

Once again we ask... what is this pattern? Also, the jewels on top are just too much.

Those draped jewels on the neckline details are big no from us. It feels like we've teleported back to 2012.

We get that she's going for the cool gothic vibes but the tuxedo jacket over the flowy dress is just an odd combo.

Okay so what exactly is going on?

From the fit to the pattern and clunky jewelry, Margot Robbie failed to win us over on this one. It's just not good. Fancy more red carpet looks? Scroll on for the best and worst dressed celebrities at the 2020 Golden Globes. Some of these looks are insane!