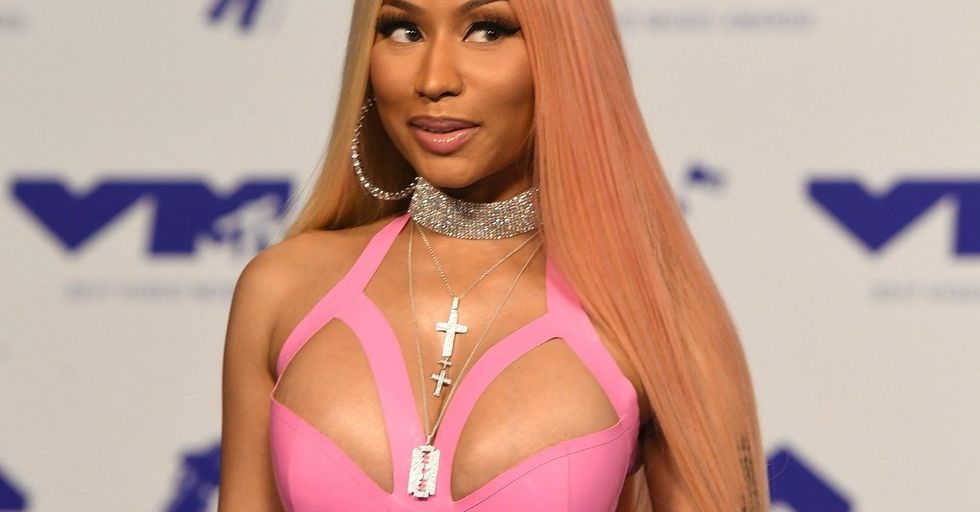 Since the first MTV Video Music Awards in 1984, the live music awards show has been anything but boring.

And this year was no exception. Check out the wildest looks on this year's red carpet.

Nicki rocked this crazy, yet chic Barbie-pink latex unitard. We can't even imagine the time and effort it must have taken to put this on. Was there baby powder involved? Maybe some sort of lubricant?

Not one to be outdone, Jared Leto wore a calf-length sequin jacket over a pink floral blouse.

Olivia Munn wore this short embroidered dress created by Nicolas Jebran. We could do without that angel though, no? What do you think?

Sophie Beem's striped outfit looks like something one might wear the morning after crashing at a friends house.

Mel B definitely sent a message with this bold sequined dress.

There's a lot going on in this black fringe dress worn by Love and Hip Hop's Hazel E.

Jasmine Sanders looks great in this Moschino pairing, but we can't stop thinking she belongs somewhere in the live-action version of Peter Pan.

Alessandra Ambrosio looks fierce in this intricate dress and those matching thigh-high lace-up boots. The boots earn her second place for longest-time-to-get-dressed (after Nicki Minaj, of course).

Farrah Abraham let her metallic gold boots do the talking.

Cole Whittle of DNCE wore a cool patterned suit, but forgot his shirt at home.

Hailey Baldwin kept it simple but sheer in this lacy body suit.

Sheer body suits are catching on this year. Remy Ma followed suit in this floral one.

In latex, pleather, and chiffon, Kelly Doty, Ryan Ashley, and Nikki Simpson definitely made an impression.

Paris Jackson looks a enchanting in her alternative take on the sheer trend.

DJ Kaled's son, Asahd, is literally the cutest. He wins the red carpet in our hearts! 10/10. Which do you think were the best and worst looks from this year's VMAs?