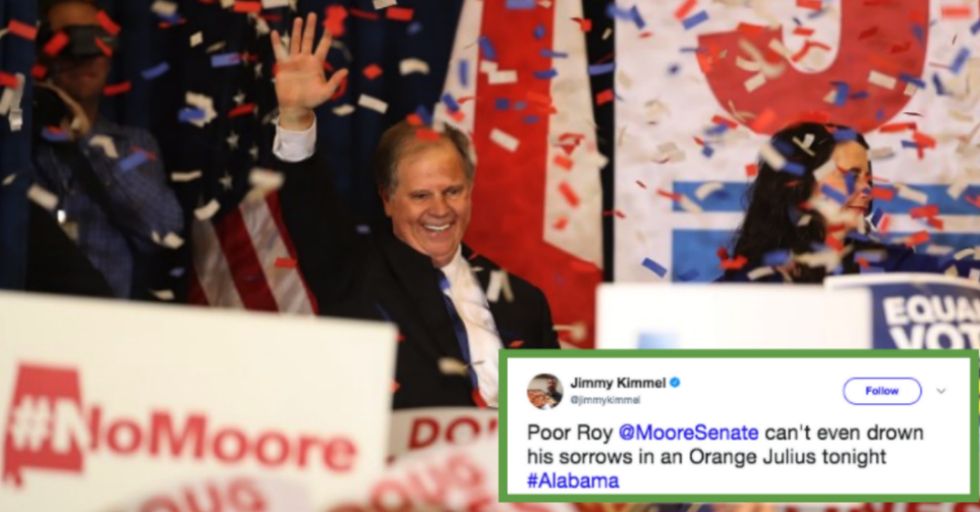 In a year marked by everything being pretty flippin' terrible, last night was a total triumph. Doug Jones beat child molester Roy Moore in the run for the Alabama Senate seat and a flicker of hope renewed the hearts of many of us watching the results and fearing for the country. Thank you, Alabama! Thank you for making the right choice and saving us from having (another) sexual predator in office.

It was a close race, but Doug Jones eked out a win for the Alabama Senate.

...And for the rest of the country. It's good to live in a country that didn't elect a child molester to the Senate, right? Here are some of the best reactions to last night's election:

Before the results finally rolled in, people were on the edge of their seats.

Desperately watching a needle quiver back and forth between good and evil is really too apt a fucking metaphor to end this year
— Lauren Duca (@Lauren Duca)1513129945.0

Which is pretty nuts when you think about it. We were so close to having an actual child molester in the actual U.S. Senate! Things are already pretty bad, but that would have been unconscionably bad!

Comedian Bess Kalb warned Roy Moore what would happen if he won:

And it does not sound too pleasant for ol' Roy, not least of all because banshees are usually above the age of consent in Alabama.

Some people (not from Alabama) commented on the fact that Alabama had never seemed quite so relevant in their personal lives.

Imagine telling yourself a few years ago that all of Twitter would be raptly watching an Alabama Senate race for so… https://t.co/LNTn5fWbtA
— Nathaniel Friedman (@Nathaniel Friedman)1513132261.0

But after the year we've had, we were all ready for a win. It was a stressful night watching the results pour in and desperately wishing that the world wouldn't spontaneously combust.

And then, IT HAPPENED! Roy Moore lost and Doug Jones won!

We'd be remiss if we didn't point out that last night was actually the first night of Chanukah, so it was actually probably a Chanukah miracle. That being said, we'll take literally any kind of miracle at this point. Colbert wasn't the only late-night host with a great response to the election...

Get it? Because Roy Moore has been banned from malls? He also can't scream, "Nobody understands me!" and run into the nearest Hot Topic. We almost feel sorry for him. HAHAHAHAHA just kidding.

Twitter also couldn't help but point out that, while the election ultimately had a good outcome, it's totally bonkers how close the race between a man who molested underage girls and a man who did not molest underage girls was.

That's 2017 for ya. Let's hope this election is the start of a complete overhaul of how we've been doing uhhhhh pretty much everything.

And of course, we can't talk about the election without talking about the importance of the people of color who voted for Doug Jones. Check out this graph:

And they showed up to vote while being systematically oppressed and having their access to the polls obstructed.

It's pretty perfect that Roy Moore, who recently said that America was better when there was slavery, lost the election in large part because of the people of color who voted against him. Those voters actually made America better.

Mark Ruffalo also thanked black folks for their participation in this roller coaster of an election.

Love and decency prevails. Thank you Alabama! The black folks of Alabama saved the day. They should seriously get p… https://t.co/UgIxhmNZHi
— Mark Ruffalo (@Mark Ruffalo)1513138799.0

(Let it also be known that the best way to react to something is with a GIF of yourself dancing with a Sesame Street character.)

John Kasich, the current Governor of Ohio and a member of the Republican Party, was also thrilled by Jones' win.

He acknowledged the fact that in order for Doug Jones to win (and for child molester Roy Moore to lose), many Republicans had to choose country over party. Let's hope people from both sides of the aisle can continue to cast their votes according to their moral compass.

Comedian Kumail Nanjiani had some good (albeit profanity-laced) advice for Moore:

Listen, Moore. You've officially lost the race for the Senate seat (thank goodness). Now's the perfect time to take up a new hobby like woodworking, geocaching, or really pretty much anything except forcing underage women to date and have sex with you.

As happy as we are about the outcome of the election, we can't forget how close we came to having a known child molester in the Senate.

Again, Doug Jones' win is a win for the entire country, but it was close there for a good while and that is totally nuts. More than anything, the Alabama Senate election shows us that we still have a lot of work to do.

We can do this, America.

Let Doug Jones' victory be one of the first steps toward actual, measurable progress. Let's continue fighting against the Roy Moores of society and show the world what we're really about.