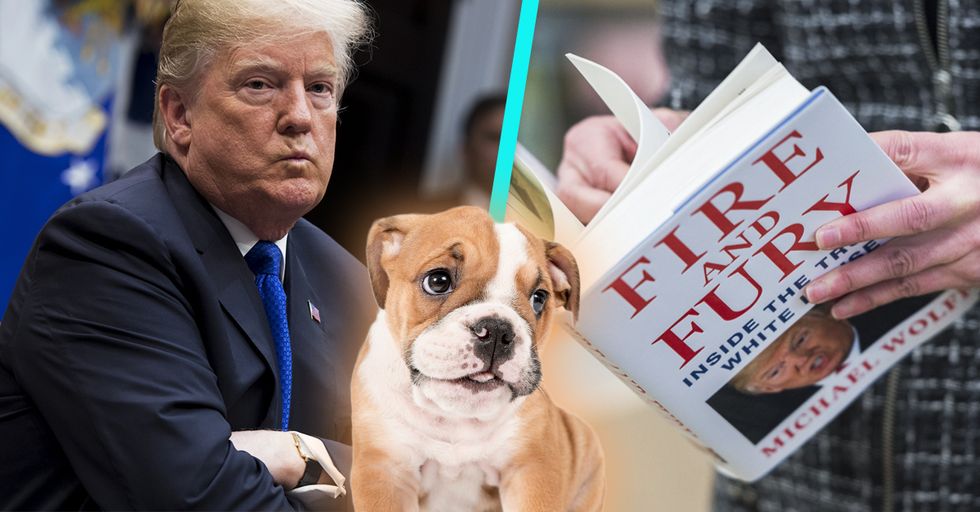 Chances are you've heard about the new book, Fire and Fury: Inside the Trump White House by journalist Michael Wolff. It's an explosive tell-all behind-the-scenes look at the Trump campaign and presidency.

And although it was only released today — four days earlier than originally intended — it's already generated so much intense discussion because many of the revelations Wolff writes about are of the Earth-shattering, shocking, and all-together absurd sort of revelations that could only apply to the one and only Donald Trump.

We want to share the craziest, most delicious, and most unbelievable details that are revealed in the book, but we know how oversaturated the Internet is with news about Trump, so we thought we'd soften the blow/provide a distraction/infuse some happy into this mess of a story by accompanying every insane thing about Trump with the cutest dang puppies you've ever seen. Why not, right? There's only so much we can do in this increasingly apocalyptic world, and we'd like to do this for you.

Trump only ran for president because he wanted to be the most famous man in the world.

This puppy is like, "Huh? Did I hear that right?" Sadly, yes, yes you did. Wolf wrote:

His ultimate goal, after all, had never been to win. "I can be the most famous man in the world," he had told his aide Sam Nunberg at the outset of the race. His longtime friend Roger Ailes, the former head of Fox News, liked to say that if you want a career in television, first run for president. Now Trump, encouraged by Ailes, was floating rumors about a Trump network. It was a great future. He would come out of this campaign, Trump assured Ailes, with a far more powerful brand and untold opportunities.

"This is bigger than I ever dreamed of," he told Ailes a week before the election. "I don’t think about losing, because it isn’t losing. We’ve totally won."

The Trumps were completely shocked and upset when he actually did win.

It's obvious by now that Trump never expected to win and never actually wanted the responsibility of running the country. But it turns out all the Trumps were pretty upset when he pulled out this victory. In Wolff's words:

Shortly after 8 p.m. on Election Night, when the unexpected trend — Trump might actually win — seemed confirmed, Don Jr. told a friend that his father, or DJT, as he calls him, looked as if he had seen a ghost. Melania was in tears—and not of joy.

In fact, nearly everyone involved in his campaign didn't think it was a good idea for Donald Trump to be president and expected him to lose.

That's right. Kellyanne Conway, Jared Kushner, Melania, even Trump himself thought it would be a terrible idea for him to actually be president.

Not only would Trump not be president, almost everyone in the campaign agreed, he should probably not be. Conveniently, the former conviction meant nobody had to deal with the latter issue.

Losing would work out for everybody. Losing was winning.

Ivanka Trump made fun of her dad's comb-over to others; a key part of it has to do with the scalp-reduction surgery Donald Trump had years ago.

She treated her father with a degree of detachment, even irony, going so far as to make fun of his comb-over to others. She often described the mechanics behind it to friends: an absolutely clean pate — a contained island after scalp-reduction ­surgery — surrounded by a furry circle of hair around the sides and front, from which all ends are drawn up to meet in the center and then swept back and secured by a stiffening spray. The color, she would point out to comical effect, was from a product called Just for Men — the longer it was left on, the darker it got. Impatience resulted in Trump’s orange-blond hair color.

Trump thinks that one of the things that makes "life worth living" is sleeping with his friends' wives.

Trump liked to say that one of the things that made life worth living was getting your friends' wives into bed. In pursuing a friend's wife, he would try to persuade the wife that her husband was perhaps not what hse thought. Then he's have his secretary ask the friend into his office; one the friend arrived, Trump would engage in what was, for him, more or less constant sexual banter. Do you still like having sex with your wife? How often? You must have had a better f*** than your wife? Tell me about it. I have girls coming in from Los Angeles at three o'clock. We can go upstairs and have a great time. I promise... And all the while, Trump would have his friend's wife on the speakerphone, listening in.

But what a cute face on that doggo, eh? Folks, we're just getting started. More puppies (and awful things about Trump) on the next page!

One time, Donald Trump literally could not recognize friends he's known for years.

Wolff wrote, "At Mar-a-Lago, just before the new year, a heavily made-up Trump failed to recognize a succession of old friends." The man might actually have dementia. Although he's been unfit for office from the start, there may be something deeper and more...biological...happening here. It's hard to speculate about these kinds of things, but the American people deserve to know if our president is in his right mind. Look at those little chihuahuas kissing each other!

For the first time since John F. Kennedy was president, the president and the first lady maintain separate bedrooms in the White House.

This is some real-life House of Cards shizz.

[Trump] retreated to his own bedroom—the first time since the Kennedy White House that a presidential couple had maintained separate rooms. In the first days, he ordered two television screens in addition to the one already there, and a lock on the door, precipitating a brief standoff with the Secret Service, who insisted they have access to the room.

Oh yeah, there's also the thing about how he got into a fight with the Secret Service about needing his own private lock on the door. This puppy looks appropriately sad about this whole situation.

Donald Trump refused to invest his own money in his campaign (probably because he never planned on winning!!!!!!!).

For a billionaire, the guy's a cheapskate. Wolff wrote:

In the end, the best Trump would do is to loan the campaign $10 million, provided he got it back as soon as they could raise other money. Steve Mnuchin, the campaign’s finance chairman, came to collect the loan with the wire instructions ready to go so Trump couldn’t conveniently forget to send the money.

Donald Trump hates the White House and the housekeeping staff.

No real surprise here. Stories have circulated for years about how terrible a boss he is.

He ­reprimanded the housekeeping staff for picking up his shirt from the floor: "If my shirt is on the floor, it's because I want it on the floor." Then he imposed a set of new rules: Nobody touch anything, especially not his toothbrush.

He doesn't want anyone to touch his toothbrush, and he eats lots of McDonald's, because he is afraid of being poisoned.

Yes, Donald Trump's Big Mac habit comes from a fear that someone will poison his food. This parenthetical comes right after the toothbrush bit:

(He had a longtime fear of being poisoned, one reason why he liked to eat at McDonald's—nobody knew he was coming and the food was safely premade.)

Good thing this pupper is able to sleep through all this nonsense. If you can imagine it, the looniness and the puppy-cuteness only increases from here...

Trump got super bored when someone tried to teach him about the Constitution, so he just gave up on learning it.

This isn't surprising, as there have been questions about whether the man is literate, but now it's confirmed...

Early in the campaign, Sam Nunberg was sent to explain the Constitution to the candidate. "I got as far as the Fourth Amendment," Nunberg recalled, "before his finger is pulling down on his lip and his eyes are rolling back in his head."

This stylish pup knows all 27 amendments to the Constitution.

Trump hated his own inauguration.

Ah ha! Just as we suspected. Even though Trump and Sean Spicer claimed his inauguration was the best inauguration, he was secretly super grumpy the entire time.

Trump did not enjoy his own inauguration. He was angry that A-level stars had snubbed the event, disgruntled with the accommodations at Blair House, and visibly fighting with his wife, who seemed on the verge of tears. Throughout the day, he wore what some around him had taken to calling his golf face: angry and pissed off, shoulders hunched, arms swinging, brow furled, lips pursed.

But how cute is this little grass-eating dachshund pup?

Donald Trump hates his own cabinet members and staff.

We sort of get the feeling he doesn't actually like anybody in his life, but the things he said about his staff are pretty hilarious (and accurate):

When he got on the phone after dinner, he’d speculate on the flaws and weaknesses of each member of his staff. Bannon was disloyal (not to mention he always looks like shit). Priebus was weak (not to mention he was short — a midget). Kushner was a suck-up. Sean Spicer was stupid (and looks terrible too). Conway was a crybaby. Jared and Ivanka should never have come to Washington.

And it's mutual! Kellyanne Conway might defend Trump to no end on TV, but she secretly hates the guy.

At this point, it seems like there's no one Donald Trump interacts with who actually likes him. Wolff wrote:

Kellyanne Conway, who would put a finger-gun to her head in private about Trump’s public comments, continued to mount an implacable defense on cable television, until she was pulled off the air by others in the White House who, however much the president enjoyed her, found her militancy idiotic.

It takes a special (awful) kind of person to hate someone and everything they stand for and then go on national television and defend them like they're the love of your life. What is going on in Kellyanne Conway's head?

Trump leaked private information and then complained about leaks.

There's the kicker, folks! Half the time Trump was complaining about leakers in the White House, he was probably the leak himself.
"As details of Trump’s personal life leaked out, he became obsessed with identifying the leaker. The source of all the gossip, however, may well have been Trump himself," Wolff wrote. "In his calls throughout the day and at night from his bed, he often spoke to people who had no reason to keep his confidences." Aw, look at those wrinkles!