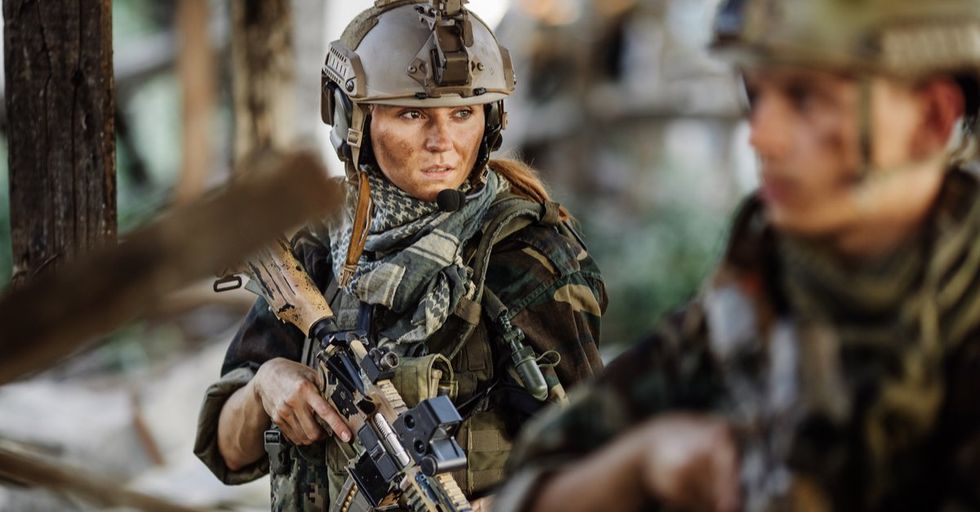 The United States Marine Corps is one of the toughest branches of the American military. Their bootcamp is notorious for being so brutal, recruits break more bones there than in any of the other branches of the military.

Basically, if you're a Marine, you're a badass.

On Monday, a female Marine became the first woman to complete the rigorous Infantry Officer Course (IOC). Getting there wasn't easy. Here are all the hurdles she had to overcome to become a trailblazer.

First, she had to actually qualify for a combat position.

Then the Pentagon changed the rules.

In December 2015, Ash Carter, Secretary of Defense at the time, announced that women could serve in all positions in the military. This opened up combat positions to women after years of research and debate.

In an effort to preempt the move, the Marines had released a study stating that all-male combat units were more effective than mixed gender ones. Further, they asked for exceptions from the rule, but Defense Secretary Carter responded with an immortal clapback, "There will be no exceptions."

In a historic statement, Obama said: "Today, the Defense Department is taking another historic step forward by opening up the remaining 10 percent of military positions, including combat roles, to women... Women who can meet the high standards required will have new opportunities to serve... Together, we're going to make sure our military remains the finest fighting force in the history of the world, worthy of all our patriots who serve — men and women."

The first female Marines graduated in 2016.

April 2016 was a historic month. Two women graduated from infantry training and joined the Marines' combat battalion — one as a rifleman, and the other as a machine gunner. (Both women requested those jobs). Still, there were no female officers.

On Monday, a lieutenant — who asked to remain anonymous — completed the grueling Infantry Officer Course to become the first-ever female officer in the Marines. This real-life GI Jane endured trials we can't even imagine.

According to the Marines, the IOC "trains and educat[s] newly selected infantry and ground intelligence officers in [the] leadership, infantry skills, and character required to serve as infantry platoon commanders in the operating forces." It takes 13 weeks, or nearly three months, of intense training at Quantico, the base in near Triangle, Virginia. Through rain or shine, sleet or snow, our GI Jane was there, kicking ass and taking names.

Her feat cannot be understated.

Before GI Jane completed the training course, 36 women had failed it. In fact, most applicants never make it past the first combat endurance test, which is a 14-hour hike complete with obstacle course and 20-foot rope. Of the 131 Marines that took on the course with our GI Jane, only 88 passed. While other Marines were falling left and right, GI Jane kept on keeping on.

She did so in the face of incredible odds.

Here's a short rundown of the kind of things she had to do:

The course requires both proficiency in the field, and the strength and stamina to carry equipment weighing up to 152 pounds. The school begins with a day-long combat endurance test that includes rigorous hikes through Quantico’s rolling, wooded hills, an obstacle course and assessments of skills like weapons assembly and land navigation.

In case you missed it, she had to lift 152 pounds.

That's the equivalent of one full-grown adult, which our GI Jane had to carry through day-long hikes, obstacle courses, and other varied and undoubtedly unpleasant military exercises.

Also, she had to look at dead bodies.

As part of mental training, GI Jane had to undergo stressful conditions which included familiarizing herself to the sight of corpses. This, of course, is in addition to rappelling from helicopters, controlling riots, and speaking with the press. Our girl had to be prepared, y'all.

Now it's on to Camp Pendleton, California.

There, she'll meet her new unit, a 40-member platoon in the 1st Marine Division. By achieving her feat, GI Jane joins the tiny list of female soldiers in elite positions in the military, a necessary and valuable asset for the war in Afghanistan. As former Marine captain Teresa Fazio stated in an opinion piece for the New York Times, "Female troops are invaluable for searching houses and communicating with local women, gaining access to spaces and information that, because of local custom, male troops cannot get."

Now people will have the chance to see what women can do in combat positions...

And people are stoked. Although, this isn't the first time women have fought on the front lines. Women have been fighting for America since the earliest days of the union. Si se puede.