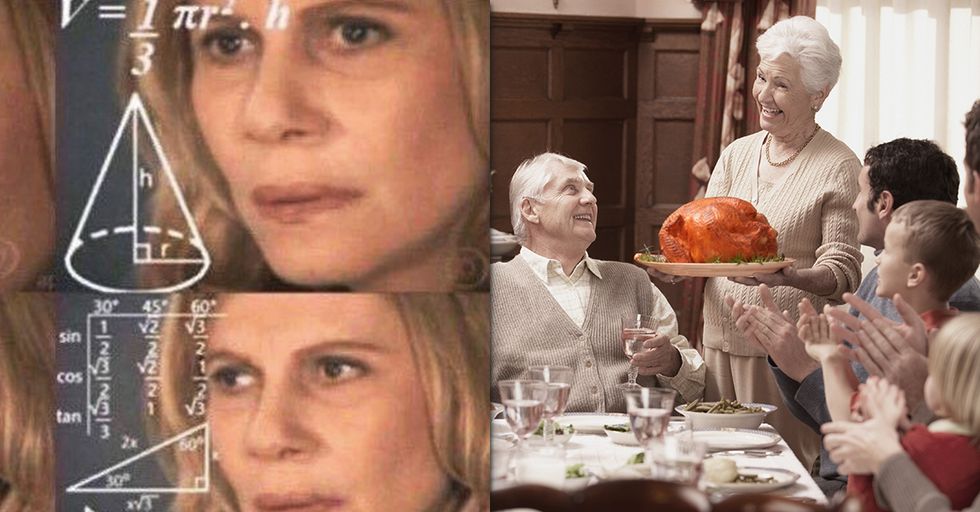 For a lucky few people, Thanksgiving is a heartwarming family holiday filled with turkey, ham, and only the tiniest hint of mass genocide. For the rest of us, Thanksgiving is war – an entire day spent employing strategic military maneuvers to avoid those nearest and dearest to you.

Here’s a little primer to get you going.

Look! That cousin you hate is coming at you from the right!

In this instance, we employ what’s known as the duck and weave. Duck so he won’t spot you and then weave until you reach the more welcoming arms of the liquor table or that other cousin whose name you always forget. Either way, the conversation here will be much more pleasant than one where you reluctantly recall all the times your hateful cousin gave you a wedgie back in middle school because he still thinks it's funny.

Oh no! That uncle that gets inappropriately touchy after a few drinks is coming at you from the left!

When your uncle wants to talk about Trump's “grab them by the p****" moment, employ the tried and tested maneuver of attract and distract. Basically, you attract the attention of your prettiest cousin (don’t play dumb, we all know who that is) and then shove them into your Uncle's path, thereby distracting him. It’s a cheap and horrible ploy, but then you’re a cheap and horrible person and you’re already going to hell anyways, so what’s one more sin to blacken your foul, foul soul…

Sweet Baby Jesus! That busybody aunt who bought those $66 collard greens from Neiman Marcus is coming to poke her nose in your business!

The truth is, Aunt Busybody doesn’t really give a crap about you. What she really wants to know is whether her kids are more successful than you, which is why she bought those greens over as a conversation starter/silent statement of superiority.

Upon this foul nemesis, we employ the ancient art of deflection.

Dear Me! Your favorite aunt – who can’t cook to save her life – is approaching with a sample of her turkey!

Okay, we're gonna level with you here. That turkey – drier than a dry season riverbed in the Sahara. Even then, there’s no way you’re going to get out of this one. That’s your Aunty Margie and you love her, so pull up your pants, and take it like an adult. Also, when you choke on it, make sure you smile and assure her that "no, the turkey isn’t dry at all." That hoarse sound you’re making – it’s just air, rattling down your throat.

Holy purple rain, Batman! That stockbroker uncle is walking over to talk to you about his “investment firm!"

First of all, you don’t really know what the heck his firm does, but you’re sure it’s 99.9% illegal. Also, you know the only reason he keeps talking to you about it is because your parents/significant-other/cat want you to work there so you can make more money and finally move out their house.

For this horrific menace, you employ the cut and run method. What's that, you ask?

That’s all there is to it. Flee, abscond, escape, fly the coop. There is no talking to this uncle – he’s the holiday Terminator and he’s on a mission to make an adult out of you. He will not stop, he will not take no for an answer. There is NO reasoning with him.

Gasp! Drunken Grandpa So and So wants to chat!

There’s only only one way to deal with this holiday menace. Grab yourself a beer, find the most comfy chair you can and sit the hell down. That’s right – Sit. The. Hell. Down. Drunken Grandpa So and So is not long for this world and you’ll miss him when he’s gone, so sit down and listen and remember – that uncomfortable feeling you’re feeling? That’s the true spirit of Thanksgiving. You're welcome.