Costume Shopping Can Be Fun, But Experts Warn of THIS Unseen Threat During Halloween | 22 Words 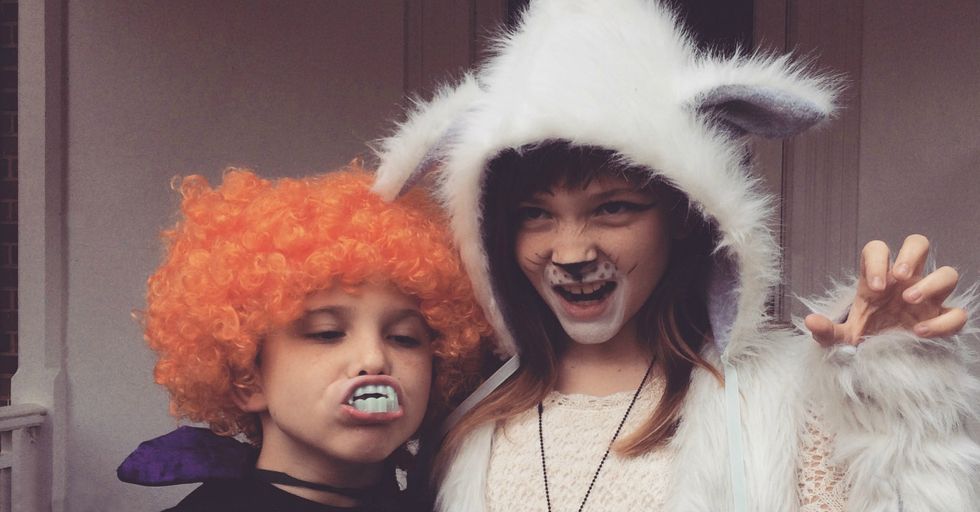 Costume Shopping Can Be Fun, But Experts Warn of THIS Unseen Threat During Halloween

Halloween is a holiday most people can get behind. What's not to love about dressing up, eating candy, and, in some cases, getting the heck scared out of you at a haunted house? When you have kids, the anticipation triples. Little ones looking forward to gathering candy is its own force.

But there are some caveats that come with getting yourself and your loved ones ready for a marathon trick-or-treating session.

Getting costumes together is one thing. But now, experts are remind us to not get too enthusiastic in trying on clothes and accessories in Halloween shops and superstores. Because you may end up bringing home something scarier than Dracula. Allow us to explain...

There's a lot to love about the spookiest holiday of the year.

Halloween has gigantic appeal to businesses and consumers alike. Sure, there's the totally commercial aspect, but it's hard not to get totally psyched about a day that encourages us to throw parties and deck out our houses like something out of a Stephen King novel. Nothing like channeling a little macabre Martha Stewart.

It's also a great occasion to celebrate pumpkin everything.

Pumpkin isn't everyone's cup of tea, but the beloved gourd does take center stage in the month of October. We get to eat pumpkin-flavored desserts, drink pumpkin-spiced lattes, carve jack-o-lanterns — and line 'em all up on the front porch.

And then there's the sugar.

Like many holidays, Halloween centers around the mass consumption of sugar. It's even totally acceptable to knock on strangers' doors and beg them for free sugar. Yes, candy in all its forms is totally welcome on October 31. And if you're a really smart parent, you take those kiddos trick-or-treating and then horde all the Reese's when you get back. Genius.

Did we mention dressing up? Because it's awesome.

The universal draw of Halloween for kids and adults alike has to be the costumes. It's totally OK if a kid wants to spontaneously dress up like Superman to go to the grocery store on a normal day. But October 31 is the only day it's acceptable for adults to run around dressed as zombies. Or zombie hunters. (It's all about personal preference.)

And, of course, we love to scare the crap out of ourselves.

Halloween wouldn't be Halloween without a few scares thrown into the mix. We love scaring other people and ourselves. It's prime time for turning off the lights and watching horror movies until we're pretty sure we're not going to be able to sleep that night. And if you're super brave, paying to go to a haunted house is where it's at.

Though some things are even scarier than horror movies.

Jason, Freddy, and Michael Myers are all pretty terrifying, but experts are now warning that we have more to look out for on Halloween than bloody B-movies. It turns out, seasonal head lice are now a very real concern for all of us. That's right. It's OK to go ahead and scream in terror.

How on earth do lice happen? Sharing is a huge part of it.

In an extremely helpful piece, the Toledo network WTOL11 looked into one of the spooky season's biggest threats thanks to pediatric nurse practitioner Cherie Sexton. Sexton says that when we go out shopping for costumes, the problem is, we don't think about the amount of people who've been there first: "We have a lot of people going into stores right now, trying on masks, trying on costumes, and trying on wigs. And a lot of people don't give much thought into the fact that several people could've tried it on before them."

Don't freak out yet. Costume shopping doesn't make you a dirty person.

Don't get too upset yet. Sexton goes on to say that even if lice strikes your family, the situation is more an inconvenience than a comment on how clean you are. "It's really not a health hazard. It's not a sign of poor hygiene. And it's not really spreading disease. It's really just more of a nuisance," she says.

The million-dollar question is, how do we avoid this tiny horror?

There are ways to get around this itchy Halloween threat, however, but it takes some diligence and patience. When you're in a store, try not to put things on your head or body. Instead, pick your purchases, take them home, and seal all garments and wigs in a plastic bag for 48 hours before wearing. It also helps to toss items in the dryer before wearing them; the heat helps kill off pests.

A warning to all the parents out there — keep on checking.

Meticulously searching for signs of lice is one of the last things we want to be doing around Halloween. But it's necessary. And Sexton also adds that post-holiday checks are a must if you want to squash any type of threat. "It can go up for seven days," she says, "so if your child has been to a Halloween costume party, or they've been to a sleepover and somebody called and said there was somebody with lice there, make sure you check your child for the next seven days."

But what happens if you do end up with lice this Halloween? Be proactive.

No one wants to think about the worst-case scenario, but there's always a chance lice might strike. And if you do end up with a wee bit of an infestation, the best plan is having a plan. At the first signs of those pesky bugs, head straight to the doctor or run and grab a treatment kit from the drugstore. Either option is better than waiting.

Don't let lice get you down. You'll have a blast this year.

While it's easy to get anxious about an impending lice invasion, just remember that being aware of the risks and knowing how to treat for the irritating bug puts you ahead of the odds. So throw on that costume, pop on that wig, and go have a blast this Halloween.