Here’s Everything Coming to Netflix in January 2020 | 22 Words 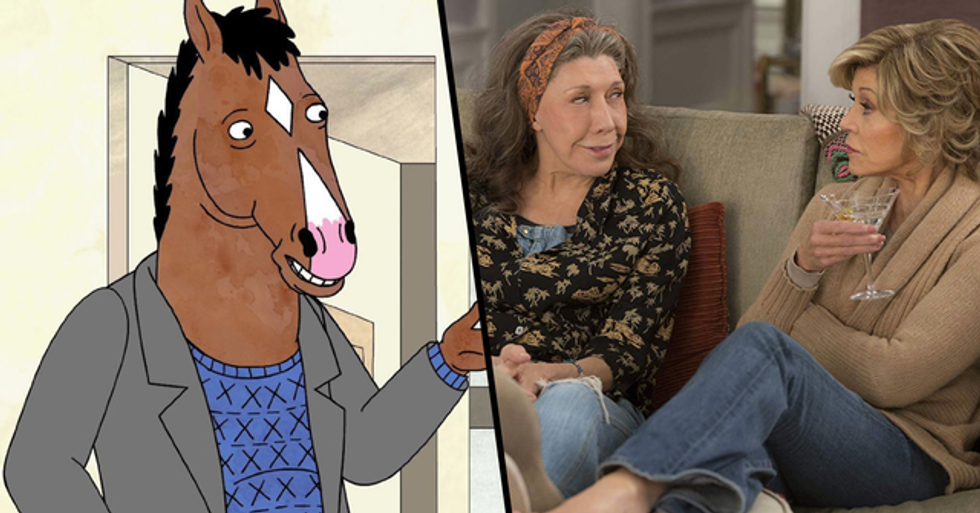 Here’s Everything Coming to Netflix in January 2020

Once the excitement of the holiday season dies down, it can be all too easy to fall into a slump come the new year. But don't worry - Netflix has got you. As with every month, they're bringing viewers the very best new movies, series, documentaries, cartoons, and even Netflix originals. So settle in and put your feet up - here's everything coming to the streaming platform in January 2020.

What IMDB says: "A detective from Tokyo scours London for his missing brother, who's been involved with the Yakuza and accused of murder."

What IMDB says: "The adventures of a young orphan girl living in the late 19th century. Follow Anne as she learns to navigate her new life on Prince Edward Island, in this new take on L.M. Montgomery's classic novels."

What Wikipedia says: "The contestants, or "players", all move into an apartment building. However, the contestants will never meet face-to-face during the course of the competition, as they will each live in their own individual apartment. They will communicate solely using their profiles on a specially-designed app, giving them the ability to portray themselves in any way they choose."

What IMDB says: "After a fall nearly ends her career, an up-and-coming, single skater seizes an opportunity to continue as a pair skater with a talented bad-boy partner, she risks exposing a fiercely kept secret that could unravel her entire life."

What IMDB says: "When a CIA officer investigates a man attracting international attention and followers through acts of public disruption, she embarks on a global, high-stakes mission to uncover whether he is a divine entity or a deceptive con artist."

What IMDB says: "MC and journalist Shad Kabango meets with Hip-Hop's biggest stars to retrace how Hip-Hop became the world's most popular music, but realizes that Hip-Hop's true legacy is something much more profound."

What IMDB says: "Finding out that their husbands are not just work partners, but have also been romantically involved for the last twenty years, two women with an already strained relationship try to cope with the circumstances together."

What IMDB says: "Two American physicians in São Paulo, Brazil, discover a civilization-threatening virus and are recruited as government agents in a race against time and around the world to find a cure and uncover a dark conspiracy."

What IMDB says: "Amateur Australian chefs compete to impress patisserie chef Adriano Zumbo with their sweet creations. Those who don't fit the brief go head to head in the 'Zumbo test' to replicate his unique desserts."

What IMDB says: "As her 16th birthday nears, Sabrina must choose between the witch world of her family and the human world of her friends. Based on the Archie comic."

What IMDB says: "The son of a Colorado rancher returns home from a semi-pro football career to run the family business."

What IMDB says: "Series based on the life of Mehmed the Conquerer."

What IMDB says: "Follow the adventures of a retired monster-hunter and his family, which includes a thrill-killer, a witch and a warlock."

What IMDB says: "A teenage boy with a sex therapist mother teams up with a high school classmate to set up an underground sex therapy clinic at school."

What IMDB says: "A small Norwegian town experiencing warm winters and violent downpours seems to be headed for another Ragnarok -- unless someone intervenes in time."

What IMDB says: "A fallen priest, a legendary demon hunter, and a modern day superhero join forces to battle evil."

What IMDB says: "BoJack Horseman was the star of the hit television show 'Horsin' Around' in the '80s and '90s, now he's washed up, living in Hollywood, complaining about everything, and wearing colorful sweaters."

What Netflix says: "A web of secrets sends family man Adam Price on a desperate quest to discover the truth about the people closest to him."

What IMDB says: "“Next in Fashion" finds 18 designers competing for the chance to become the next big name in fashion. Throughout the 10 episode season, contestants will be tasked with completing challenges centering on a different trend or design style that has influenced the way the entire world dresses. Hosted by Tan France and Alexa Chung."

What IMDB says: "In 1897 Transylvania, the blood-drinking Count draws his plans against Victorian London."

Netflix Originals: A Fall From Grace

What Netflix says: "The film follows a woman who finds a dangerous new love. This marks the first Tyler Perry film to be released by Netflix."

What Netflix says: "The wonders of the nocturnal world reveal themselves like never before in this nature documentary series."

What Netflix says: "Meet the women and men on the front lines of the battle against influenza -- and learn about the steps they're taking to stop the next global outbreak."

What IMDB says: "A documentary series that looks to explore the big questions of today."

What IMDB says: "A remake from the original anime 'Knights of the Zodiac.'"

What IMDB says: "High schooler Yuu and his friend Haru get involved in a case involving his childhood friend Kotona, which forces them to go back and forth between another world that is different but is somewhat similar to their world, Ni no Kuni."

What Netflix says: "On a small island, Seven, an assassin who can disguise himself as anything, carries out various assassinations at a low price, charging only 567 yuan for each mission."

What IMDB says: "When the McKellan family moves from Seattle to Georgia to be closer to extended family, the transition is like being a catfish out of water."

Kipo & the Age of Wonderbeasts

What IMDB says: "A girl explores the possibilities in a post-apocalyptic world."

The Healing Powers of Dude

What Netflix says: "When an 11-year-old boy with social anxiety disorder must start middle school, he finds strength in a lovable comfort mutt named Dude."

What Netflix says: "Join kid car Cory Carson on his adventures around the winding roads of childhood in Bumperton Hills! Based on the hit toy line Toot-Toot Drivers."

What IMDB says: "A high school wise guy is determined to have a day off from school, despite what the Principal thinks of that."

What IMDB says: "The last dragon and a disillusioned dragonslaying Knight must cooperate to stop an evil King, who was given partial immortality."

What IMDB says: "When he finds out that his work superiors host a dinner celebrating the idiocy of their guests, a rising executive questions it when he's invited, just as he befriends a man who would be the perfect guest."

What IMDB says: "A young boy wins a tour through the most magnificent chocolate factory in the world, led by the world's most unusual candy maker."

What IMDB says: "Routinely exploited by her wicked stepmother, the downtrodden Sam Montgomery is excited about the prospect of meeting her Internet beau at the school's Halloween dance."

What IMDB says: "Two very different twin sisters haven't spent a day together in years. That changes the day they have to go to NYC and everything goes wrong - chased by a truancy officer, a killer wanting a chip back and two nice young guys."

What IMDB says: "A thief who steals corporate secrets through the use of dream-sharing technology is given the inverse task of planting an idea into the mind of a C.E.O."

What IMDB says: "While helping his latest client woo the woman of his dreams, a professional "date doctor" finds that his game doesn't quite work on the gossip columnist with whom he's smitten."

What IMDB says: "A Korean-American office worker and his Indian-American stoner friend embark on a quest to satisfy their desire for White Castle burgers."

What IMDB says: "When a boy learns that a beloved killer whale is to be killed by the aquarium owners, the boy risks everything to free the whale."

The Naked Gun: From the Files of Police Squad!

The Naked Gun 2½: The Smell of Fear

What IMDB says: "Lieutenant Frank Drebin discovers that his ex-girlfriend's new beau is involved in a plot to kidnap a scientist who advocates solar energy."

The Lord of the Rings: The Two Towers

What IMDB says: "While Frodo and Sam edge closer to Mordor with the help of the shifty Gollum, the divided fellowship makes a stand against Sauron's new ally, Saruman, and his hordes of Isengard."

The Lord of the Rings: The Return of the King

What IMDB says: "Gandalf and Aragorn lead the World of Men against Sauron's army to draw his gaze from Frodo and Sam as they approach Mount Doom with the One Ring."

What IMDB says: "When CIA analyst Jack Ryan interferes with an IRA assassination, a renegade faction targets him and his family for revenge."

What IMDB says: "After the death of his girlfriend at the hands of terrorists, Mitch Rapp is drawn into the world of counterterrorism, mentored by tough-as-nails former U.S. Navy S.E.A.L. Stan Hurley."

We Are Your Friends

What IMDB says: "Caught between a forbidden romance and the expectations of his friends, aspiring DJ Cole Carter attempts to find the path in life that leads to fame and fortune."

What IMDB says: "After the death of Princess Diana, Queen Elizabeth II struggles with her reaction to a sequence of events nobody could have predicted."

What IMDB says: "Inspired by actual events, a group of fame-obsessed teenagers use the internet to track celebrities' whereabouts in order to rob their homes."

What IMDB says: "A man challenges himself to say "yes" to everything for an entire year."

What IMDB says: "A poor but hopeful boy seeks one of the five coveted golden tickets that will send him on a tour of Willy Wonka's mysterious chocolate factory."

What IMDB says: "The wife of a university research scientist believes that her lakeside Vermont home is haunted by a ghost - or that she is losing her mind."

What IMDB says: "A journalist must investigate a mysterious videotape which seems to cause the death of anyone one week to the day after they view it." Up for some more Netflix content? Scroll on for the very NSFW meme the company started last month. You won't believe what went down on Twitter.