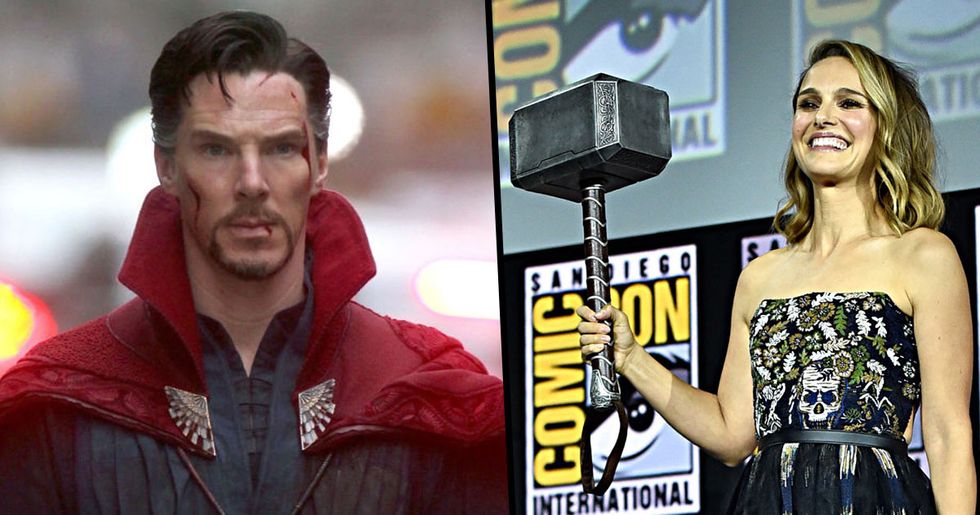 Here's Everything Marvel Just Announced Is Coming in Phase Four

Over the weekend, one of the biggest events in every avid movie and TV fan's calender took place... Comic-Con. A huge array of big studios were in the line-up, with fans flocking to watch their favorites chat all things television, films, and, of course, to be the first to hear exciting announcements, too. This year, Hollywood giant, Marvel, were in attendance - they were probably one of the most highly-anticipated guests at the event.

When Marvel attends Comic-Con, you know it's going to be good. Their presentations have become hot property, with celebs galore, casting unveilings, and exciting movie lineups in store for fans lucky enough to attend in the flesh.

Marvel certainly didn't disappoint this year either, with the studio's president, Kevin Feige, revealing the long-awaited official movie and TV lineup for the next 2 years, or "Phase 4," as they like to call it (very fancy).

There are a few surprises as well as exciting long-anticipated releases, so, without further ado, here's everything that's coming in  Marvel's "Phase 4" in the next couple of years.

Kicking off Marvel's hectic movie schedule is the feature film, Black Widow, which will be the first project of Phase 4 to hit theatres. Feige surprised the audience with the first bit footage from Black Widow during the presentation, confirming that the movie is currently in production.

Who's set to star in the movie?

Well, the film seems to be shaping up quite nicely. Directed by Cate Shortland,  the movie will star Scarlett Johansson, who'll be reprising her role of Natasha Romanoff, as well as newcomers to the Marvel empire, David Harbour as Alexei aka The Red Guardian, Florence Pugh as Yelena, O-T Fagbenle as Mason, and Rachel Weisz as Melina.

It always amazing to see our favorite characters get their own feature films, or reprising their roles in sequels, but there's something even more exciting about getting brand new heroes to become invested in. And it looks like that's exactly what's about to happen, as there's going to be some more superheroes joining the Marvel cinematic universe, as the new feature film, The Eternals, is set to introduce viewers to a brand new team of superheroes.

While we don't know much about this project, we do know who the cast will be.

During the presentation, Fiege introduced director, Chloé Zhao, along with the star-studded cast, including the likes of Richard Madden as Ikaris, Kumail Nanjiani as Kingo, Lauren Ridloff as Makkari, Brian Tyree Henry as Phastos, Salma Hayek as Ajak, Lia McHugh as Sprite, Don Lee as Gilgamesh, and Angelina Jolie as Thena.

The Falcon and the Winter Soldier, Fall 2020.

The series is set to be action-packed, picking up after the events from Avengers: Endgame.

Viewers will get to see the 2 heroes join forces and fight together against evil after the explosive events of Endgame, in the upcoming series. Anthony Mackie (The Falcon) and Sebastian Stan (The Winter Soldier) came onto the Comic-Con stage during Marvel's presentation to greet fans, where it was also revealed that Daniel Brühl will return as the villain, Baron Zemo.

Plotwise, Marvel appears to be keeping their cards close to their chest with this one, as all we know is that the movie will be based on Shang-Chi, the master of Kung-Fu. Although Kevin Feige did announce the confirmed casting for the movie. Simu Liu will star in the title role of Shang-Chi, the real Mandarin will be played by acclaimed Chinese actor Tony Leung, while Awkwafina is also confirmed to star in an unknown capacity.

But Feige had been hinting at this movie for a long time...

The announcement shouldn't have come as that much of a shock, as Feige claimed that the movie had been hinted at in the MCU films since the first Iron Man. 10 Rings is the terrorist organization first mentioned in the original Iron Man film, and will presumably be the organization that the martial arts hero will come up against in the new movie.

WandaVision is next in the line-up, hitting theatres during Spring 2021.

The Disney+ original series will see Paul Bettany reprise the role of Vision and Elizabeth Olsen returning to her role of Wanda Maximoff/Scarlet Witch.

Although the plot is currently unknown, we are set to be introduced to a Captain Marvel character.

Marvel newcomer, Teyonah Parris, will be playing the grown-up version of Monica Rambeau, who we were first introduced to in Captain Marvel, in the TV spinoff.

During the presentation this weekend, Feige offered news on the Marvel Studios' original series, Loki. The show will star Tom Hiddleston, back in his role of Loki, the trickster and God of mischief, who's everyone's favorite villain.

Hiddleston explained that we'll see a major character regression from Loki during the series.

Loki disappeared in the middle of Avengers: Endgame when Tony Stark and Scott Lang messed up the time heist for the Space Stone back in 2012, therefore, viewers will see a regression back to Loki from 2012’s The Avengers. "Just about the last thing that happened to him as he got Hulk smashed. So there’s a lot of psychological evolution that is still yet to happen. Kevin has generously shown me what his plans are," Hiddleston explained. "It’s one of the most exciting creative opportunities I’ve come across. This is new territory, a new world, new challenges I can’t wait to get started."

Doctor Strange in the Multiverse of Madness, May 7, 2021.

The sequel to Doctor Strange, which hit the box office 3 years ago, has also been announced, directed by Scott Derrickson. Benedict Cumberbatch will reprise his role as Stephen Strange, but, as far as the rest of the cast is concerned, we don't know much more than that.

But there was also a massive turn of events...

Elizabeth Olsen is also starring the film, with the plot said to directly link to the Disney+ series, WandaVision.

The studio's first-ever animated series, What If...?, is heading to Disney+ in Summer 2021.

According to Feige, the series is being created exclusively for Disney+ and will feature stories that present alternate realities in the Marvel universe, with more than twenty-five Marvel actors set to reprise their roles as voice talent in the series.

Here are some of the familiar faces who will be reprising their roles:

Jeffrey Wright is confirmed to join the cast as The Watcher, with Michael B. Jordan said to be coming back, which means that we’re getting more Killmonger, and Stanley Tucci is also set to return for the first time since playing Dr. Abraham Erskine in Captain America: The First Avenger back in 2011. But there's obviously much more to look forward to with this one.

Hawkeye is heading our way in Fall 2021.

Jeremy Renner is finally getting to take the spotlight as he reprises his role as Hawkeye in this Disney+ series. The series will center on Hawkeye as he teaches someone else how to be a superhero without superpowers. "That makes everyone a superhero," Renner explained.

The teaser showed us a fan-favorite character who's set to get screen-time, too.

The big reveal during Marvel's presentation was that the series will also feature the introduction of Kate Bishop, a fellow archer, and fan-favorite from the comics. Apart from this, all was quiet on the full cast side of things, so, we guess we'll have to just wait and see.

Much to the excitement of fans, the next Thor film, directed by Taika Waititi, has officially been confirmed, making it the fourth installment in the popular franchise. Thor 4 is the first time that a film series in the Marvel empire will go past the third installment, and at their Comic-Con panel this weekend, Marvel Studios gave fans insight into what's in store for the film - and it got everyone really excited...

Amongst the cast is Natalie Portman, who will be playing a female version of Thor.

Obviously, Chris Hemsworth will be returning to his role of Thor and Tessa Thompson will also be coming back to star as Valkyrie, but, most interestingly, Jane Foster, played by Natalie Portman, will become the Mighty Thor, the Goddess of Thunder. Speaking at the presentation, Waititi said: "When we were shooting Ragnarok I was reading one storyline by Jason Aaron, the Mighty Thor. And for those of you who know that storyline, it’s incredible and introduced love and thunder and for the first time, female Thor."

Next up is Blade, with no confirmed release date yet.

The half-human, half-vampire character, Blade, first hit screens in the hit movie Blade in 1998, that starred Wesley Snipes, who also went on to reprise the role again in 2002 and 2004. And, now, Marvel has announced that the character will be at the center of a new feature film.

Mahershala Ali will be playing this version of the human-vampire hybrid.

The two-time Oscar winner is known for his roles in Green Book, Moonlight, and more recently HBO's latest installment of True Detective.

Black Panther 2 has been confirmed.

Though no date has been set, fans were ecstatic to hear that a second installment of the hugely popular feature film is in the works.

The first movie was a massive hit, even scoring 3 Oscars.

Back in November, Coogler teased what it's like to return for Black Panther 2, admitting that he's trying to not let the pressure of living up to the first film get to him. "Really try to go step by step and try to quiet everything else around us, really focus on trying to make something that has some type of meaning," he explained. For now, the sequel appears to be very early on in development, so we'll have to sit tight for more announcements.

It's yet to be revealed whether or not directors, Anna Boden and Ryan Fleck, will return for the highly-anticipated sequel. However, given the film's massive box office success, their return is likely to be inevitable. Though Marvel didn't get into specifics after their jaw-dropping Phase 4 slate, Feige did name-drop a Captain Marvel sequel at the very end of the jam-packed presentation, teasing that the movie is in the works.

Fingers crossed we get more news on this Brie Larson-headed sequel soon.

Considering the movie only came out in March, it's pretty good going that we've had any sort of confirmation!

Guardians of the Galaxy, Vol. 3 is also confirmed.

So, we aren't exactly surprised to see a third installment confirmed.

A release date for Guardians of the Galaxy 3 was not unveiled, but Feige reassured fans that it is in development and will come out soon.

Finally, a Fantastic Four reboot is in the works.

During the end of the Marvel panel, Feige revealed a number of projects that he couldn't fully discuss just yet, but are still coming, and excitingly, one of them is a reboot of Fantastic Four. Originally released in 2005, the movie received mixed reviews, but, nevertheless, a sequel called Fantastic Four: Rise of the Silver Surfer, was released two years later and, more recently, a reboot hit theatres in 2015.

The prospect of seeing Reed Richards and the gang got many fans excited.

Fans have been flocking to social media to express their views on the upcoming movie, with many trying to guess, and even offer Marvel some suggestions, on who the cast should be.