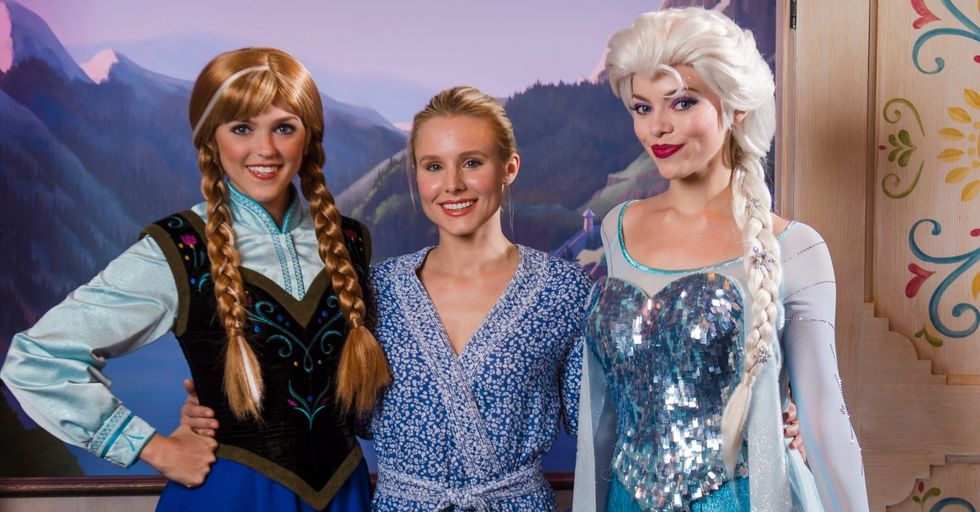 Ever heard of a little film called Frozen? Well, if you haven't,  you've apparently been living under a rock for the past four years, because after its release on November 27 of 2013, the entire WORLD came down with a terrible case of Frozen Fever.

Little girls everywhere dreamed of being Princess Anna or Queen Elsa, and with Frozen 2 reportedly coming out in 2019, it doesn't seem like the hype will be going away anytime soon.

So can you imagine how amazing your life would be if you, as a little girl, had Princess Anna for a MOM?!

Keep scrolling to hear the surprising opinion that Kristen Bell's daughters have regarding their royal mother.

But not like the damsel-in-distress type. Kristen is totally similar to her character Anna in Frozen. For example, she isn't afraid to be goofy and never takes herself too seriously.

When Hurricane Irma struck Orlando, Bell was stranded at the Walt Disney World Swan and Dolphin Resort. Instead of just riding out the storm, she decided to take action, and helped volunteers bring food and water to other Irma victims.

And, in a ridiculously princess-like move, she took things one step further and even performed songs from "Frozen" to a group of victims stranded in a middle school gymnasium.

If you're going to get stuck in a hurricane, that's the gym you'd want to ride out the storm in. “This was today’s wonderful surprise from Kristen Bell to Meadow Woods Middle School shelter! She’s amazing!" the school wrote in a gushing Facebook post.

And although it shouldn't matter, Bell is also completely gorgeous.

Here she is, looking every bit the princess with her Disney fam Auli'i Cravalho, the voice of Moana. "Found the lovely @auliicravalho and gave her a little princess snuggle :)," Bell captioned the photo. OMG, do you think the princesses all just hang out together?!

We can only assume how over-the-moon Bell's two young daughters are about their mom's princess status.

Bell and her husband Dax Shepard have two girls: Delta Bell Shepard, 2, and Lincoln Shepard, 4. So how do her two mini me's feel about having a mom that most little girls are obsessed with? Keep reading to find out.

Bell did an Ask Me Anything Reddit thread to promote her show "The Good Place" on October 6.

She titled the thread "Hi! I’m professional sloth enthusiast and actress on The Good Place, Kristen Bell. Ask Me Anything!" During the conversation, Reddit users asked about everything from her favorite sloth fact to what was for dinner that night.

But one of the first questions that popped up had a somewhat surprising answer.

A Reddit user named SpiderGOOSE asked Bell this question, which received one of the first responses: "Do you ever like to remind your daughters that youre a real disney princess?" "Do they ever ask you to sing like Anna?"

"And they constantly tell me NOT to sing." "They are BRUTAL." We are SHOOK.

How could this be possible?!

We would have thought they would have been constantly one-upping their friends with the fact that their mother is, in fact, a Disney princess. Just imagine how jealous all those other little girls would be who most likely go as Anna for Halloween EVERY year!

While many Reddit users were surprised by this news, several related to her daughters' reaction.

"My daughter won't let me sing any Frozen songs either," said user Beardybaldy. "STOP DAD, YOU'RE NOT A PRINCESS!" "Breaks my heart every time." AW! And those weren't the only adults who had been shut down by their offspring...

The trend of children shutting down adult Frozen-lovers continued with more users relating their experiences.

"A girl at a preschool where I taught protested loudly when I sang the Frozen song," said user RandyOrangutan. "You're not a girl!!" "Then the Olaf song came on and she started singing. Grown up man to 5 y/o girl: "Don't sing that. You're not a snowman!"

Another user asked about the upcoming sequal.

"Can you tell us anything about the upcoming Frozen 2?" asked Shivan21. "I wish," responses Bell. "But they are ALWAYS WATCHING." Oh well. We'll have to take Elsa's advice and just "let it go".