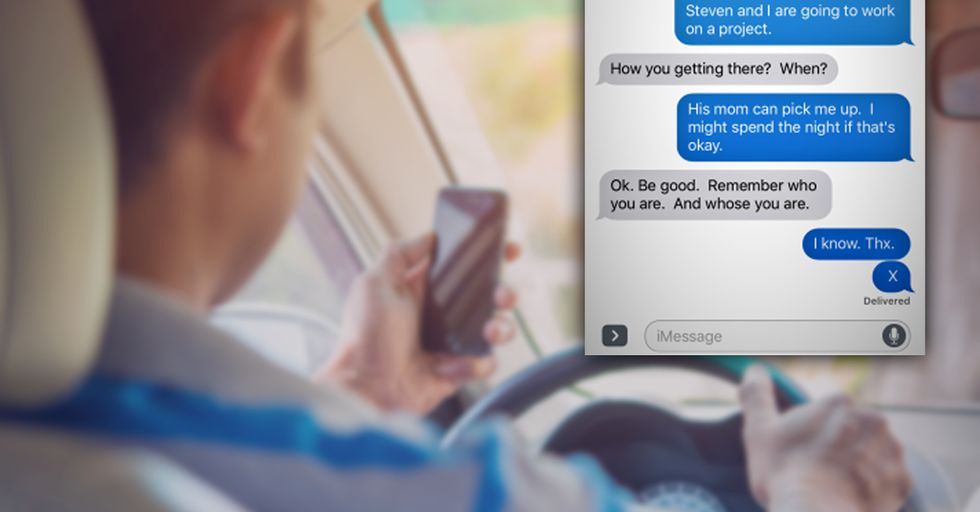 Almost none of us escape our teen years without feeling the uncomfortable weight of peer pressure.

What's worse is that it peaks in middle and high school, at a time in our lives when we most want to fit in with our peers but are probably least likely to make entirely level-headed decisions. That's a dangerous combination.

It's a scary thing for parents to contemplate. It means our teenagers are out in the world experiencing peer pressure, too, and we know that some of us are better at overcoming or ignoring it than others. Plus, as much as we'd love to believe our kids would come talk to us if a sticky situation ever arose, most of us also remember that our teenage selves would have sooner followed our friends off the edge of a cliff than lost face in front of them or (heaven forbid) asked our parents to bail us out.

Thankfully, Bert Fulks, a youth minister and father of three in West Virginia, has a plan that can help.

Fulks recently asked a group of kids if they'd ever found themselves in an uncomfortable situation that they went along with simply because they felt like there was no good alternative.

Every single kid raised their hand. Heck, I would have, too! Fulk understands, sharing, "I still recall my first time drinking beer at a friend’s house in junior high school—I hated it, but I felt cornered...and I certainly couldn’t call my parents and ask them to rescue me. I wasn’t supposed to be there in the first place. As a teen, forcing down alcohol seemed a whole lot easier than offering myself up for punishment, endless nagging and interrogation, and the potential end of freedom as I knew it."

Fulk didn't want his own kids to ever be in that situation if he could help it, so he came up with the "X Plan."

It's pretty straight-forward. If one of his kids is ever in a situation that makes them uneasy and they need help, they simply text the letter X to any family member who can drive.

The family member who received the text then calls the stranded teen right back, and follows a script like this:

With that, his kids always have a safe way to escape a social situation that they're uncomfortable with, while avoiding any backlash from their peers. After all, if you're out with your buddies and one of your parents or an older sibling tells you there's a family emergency, it's not your fault you have to pass on the beer bong and high tail it home, right?

This is a no-questions-asked deal; the child you pick up must be under no obligation to tell you what was going on, "even if he is ten miles away from where he's supposed to be," Fulk cautions. The only exception is if someone else is in danger; then the child is obligated to speak up so the adult can help. Fulk acknowledges that's tough for some parents to swallow, but it's critical for trust in the relationship and to ensure your teen actually feels safe enough to use the plan. Besides, it's a small price to pay to know your child will be coming home one way or another, instead of ending up in a recovery center, juvenile detention — or worse.