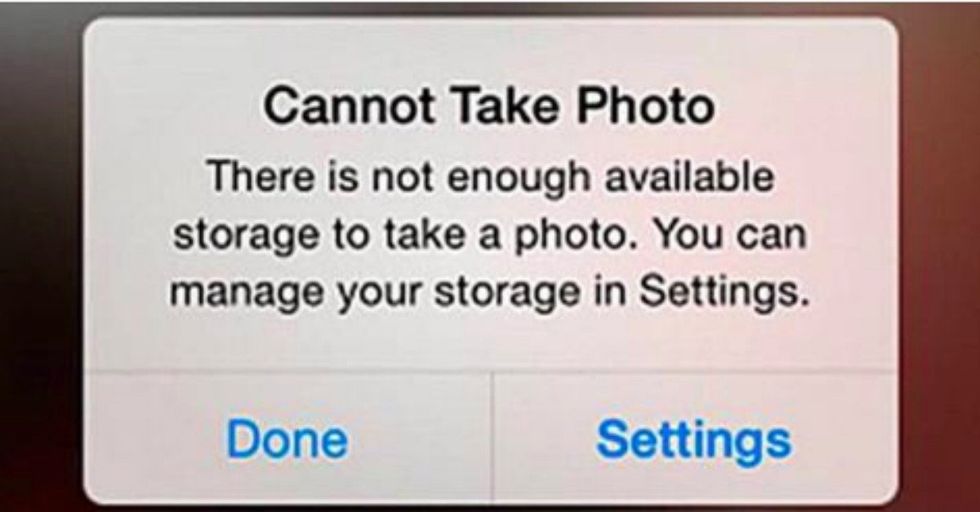 In the interest of full disclosure, I have to say that I'm new to the world of the iPhone in that I purchased my first on in August after having a flip phone for a decade. Welcome to the future, Abby!

I'm still learning about everything it can do, but one of the biggest complaints that I hear from fellow iPhone users is that memory issues are a huge pain in the butt. There’s really no easy way to clear the data cache in one fell-swoop like you can with an Android phone to delete the useless cached data that accumulates with regular use.

But there are some tips and tricks to clearing up that annoying cached data on your iPhone, all without deleting your photos.

Go through all the steps of renting a movie, but don't actually rent it.

We wrote about this before, but it's worth repeating. Long story short, Apple isn’t going to throw away a chance to take money away from you, so to prepare a video download, the OS automatically clears useless cached data on your phone to prepare your memory for space to download the movie. As long as you don’t pull the trigger and actually pay for it, you’ll have easily cleared up to 3 GB of space on your iPhone.

I know you get excited when new bells and whistles come out to download, but how many of them do you actually use all that often? They all take up precious space and memory. If you’re not using an app all that much, just ditch it and re-download it later over WiFi if you really, really need it.

Do you really need texts from a year ago? Probably not, so don’t be a data hoarder, get rid of old conversations you’re never going to go back and look at ever again. Go to settings-> messages -> tick off "keep messages for 30 days" and enjoy your extra storage space.

Recent photos are basically added to your phone twice using this feature, so it’s a waste unless you absolutely need to sync photos between your iPhone and iPad.

iPhone’s camera is great and HDR mode helps give you pretty darn good photo quality even in low light. The problem pops up because your phone will save both an HDR version of the photo and a version without this feature. Go to settings -> photos & camera -> and un-tick the "Keep Normal Photo" option.

This is annoying because you have to clear the data cache for applications one by one. But go to settings -> Safari (or Chrome or Firefox or whatever browser you use) and tap “Clear History and Website Data". Frequently visited sites may take a little longer to load, but it’s not that much of a compromise big picture.

Get rid of automatic app updates.

Automatic app updates will not only put a strain on your data plan, but also on your phone’s battery. Set it up to work only on WiFi or make it so that you have to manually update your phone’s applications. Go to Settings -> iTunes & App Store -> Turn off updates.

Google applications aren’t just for Android phones – you can enjoy them on your iPhone. Google photos stores all of your photos online, for free, for life. There’s no memory cap, just store hi-resolution (not full resolution) versions of the photos and then upload them all when you’re connected to WiFi. Go into settings of the Google Photos app, tap “Free Up Space" and the app will automatically delete all of the duplicate photos stored on the phone while they’re all backed up online.

And there you go!

More room for you to do all the super important things on your phone!