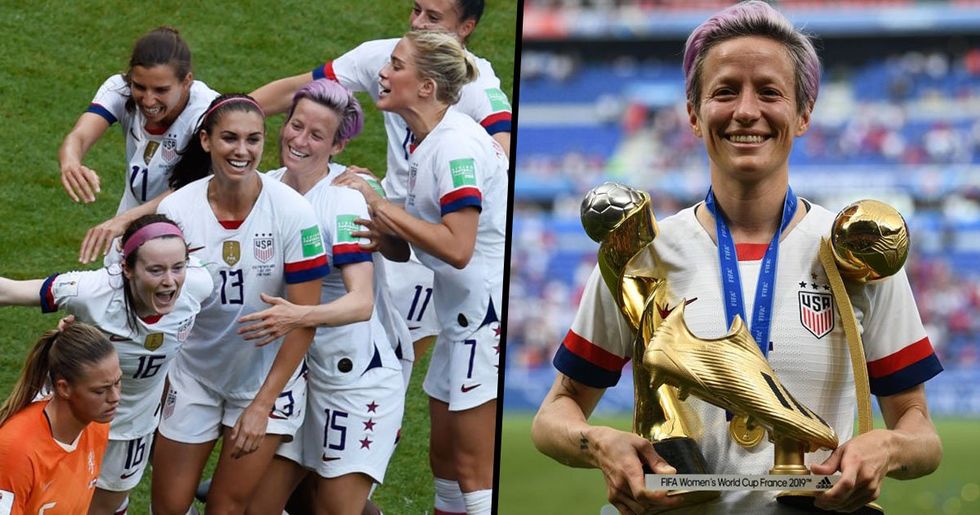 Here's the Huge Pay Gap Between U.S. Women's Team Winning the World Cup vs the Men

The U.S. women's team won the World Cup this weekend.

Despite the wave of negativity coming from the homophobic, sexist, and Trump-supporting members of the American public that sought to dampen the flames of the team's unrelenting glory, the ladies did what the men couldn't; they brought home the trophy.

You can say what you like about the USWNT, I mean I'd prefer you didn't, because they don't deserve it, but, y'know, this is still a free country...

What you can't argue with, though, is the facts, and the fact is that the USWNT has proven that they are the best soccer team in the world. Their win wasn't even a close one; they sailed to victory.

But there is one itching fact that ought to be disputed; the fact of the huge pay gap between the U.S. women's team and the (not-world-cup-trophy-holding) men's team.

Here's what you need to know...

There's a reason that European soccer stars go and play in the MLS in their final years before retirement...

The reason? The U.S. male soccer players aren't that good. David Beckham in his prime wouldn't have dreamed of signing onto a U.S. league team. Beckham with a bad knee, limping his way into retirement, on the other hand? Sure, sign him up to LA Galaxy!

I'm not trying to put down the U.S. men's soccer league, but it's a generally recognized truth that America are not the ones to beat; they're no competition to European teams.

Maybe that's because American men don't have much of an interest in soccer.

Americans are more known for basketball, baseball, football, golf, ice-hockey... Soccer just doesn't seem to be our jam; well, that's for then men, of course.

It's a different story when it comes to the U.S. women's soccer team, though.

Now, more women in U.S. colleges play soccer than their male classmates. Promising European soccer players will start to move to the U.S. to play the game - and not at the end of their career, at the start.  Why? Because when it comes to women's soccer, the U.S. has the best players and the best coaches in the world.

The gender pay gap row isn't just happening on the soccer pitch. It's a fight happening all over the world in every imaginable industry. What's interesting, though, is that a common defense against having equal pay between genders in some workplaces is that men are better suited to the job. They argue that men are more skilled and/or more physically able.

If it's a matter of the "better" gender getting the better pay, what on Earth is going on with the pay gap in soccer?

Welsh soccer correspondent, Sam Howe, considered: "The women's U.S. team would beat the U.S. men's." The only way that that could be truly proven is if the two teams went against each other in a never before seen mixed soccer game, but I think that we'll be waiting a while for that one.

So how much is everyone getting paid?

Darren Rovell of Action Network revealed on Twitter that, under the current system, the players in the USWNT made about $250,000 each for winning the competition. The U.S. men's players would have walked away with a cool $1.1 million each.

For anyone arguing that the women's World Cup doesn't garner as much interest:

You might be naive enough to think that the male players deserve more money because more people watch their tournament, but the tide is changing, people want to watch the women's World cup. Do you know what doesn't help the growing numbers of viewers watching women's World cup though? Poor scheduling.

This year's women's World Cup final was scheduled for Sunday, the same day as The Gold Cup and The Copa America Finals.

Despite all of the meticulous care that should go into planning and scheduling the competition, they decided to put the World Cup final on at the same time as the men's CONCACAF Gold Cup final, as well as the Copa America Final. Of course, the U.S. men's team lost The Gold Cup - to Mexico no less, (take that, Trump and your wanky wall).

Petition for Megan Rapinoe to take over the organizing of FIFA's women's World Cup...

Rapinoe commented on the poor scheduling of the final, saying: "If you really care are you letting the gap grow? Are you scheduling three finals on the same day? No, you're not. Are you letting federations have their teams play two games in the four years between each tournament? No, you're not. That's what I mean about the level of care. You need attention and detail and the best minds that we have in the women's game, helping it grow every single day."

The giant gap between the men and women's Fifa World Cup prize fund:

FIFA have said they intend to increase the prize fund for the women's World Cup.

On July 5th, FIFA president, Gianni Infantino, mused that the federation would consider increasing the prize fund for the women's World Cup. Infantino said, "We don't need all this money in the Swiss banks," referencing FIFA's cash reserves. "The Swiss banks have enough money." Now, it can't just be me that found his word choices condescending...

Wouldn't it be nice if the president of FIFA seemed excited about the growing interest in the women's competition?

Wouldn't it be nice if he seemed enthusiastic about building a better future for the tournament? "I guess we don't need the money growing dust in a bank vault" isn't exactly what we're looking for... Maybe FIFA will never cease to be a male-centric organization; there needs to be a reshuffling at the top of the table.

Doubling the prize fund isn't going to change much of anything - especially when you increase the men's prize fund, too.

"The men’s World Cup will be the very opposite of the thrilling spectacle just completed," writes @FranklinFoer of… https://t.co/I6InQ0Nt4u
— The Atlantic (@The Atlantic)1562556468.0

FIFA have said they will consider doubling the women's World Cup prize fund, meaning that it will stand at the 2023 tournament as $60 million dollars - which is still considerably lower than the men's tournament, which will actually go up to "$440m for the Qatar World Cup in 2022." Megan Rapinoe, on Infantino's comments, has said, the women's league needs serious investment: "Money from FIFA, money from federations. Money from advertisers, sponsors, rights-holders, TV. All of that. And obviously not just blindly throwing cash at things, but investing in infrastructure, in training programs or academies for women, in coaching for women. All of it."

The USNWT is not sitting around grumbling about the pay gap, they're taking action.

This year, the U.S. women's team filed a lawsuit against U.S. Soccer over the massive pay disparity between the genders, as well as the differences in the working conditions.

Following the victorious defeat of the Netherlands in the World Cup Final, the players had more to say.

In a statement released by CBS's Keith Sharman, Molly Levinson, the spokesperson for the USNWT announced: "At this moment of tremendous pride for America, the sad equation remains all too clear, and Americans won’t stand for it anymore. These athletes generate more revenue and garner higher tv ratings but get paid less simply because they are women. It is time for the Federation to correct this disparity once and for all."

And a word to those that call out the USNWT for being arrogant...

Women, for centuries and centuries, have been told to be quiet, to be agreeable, to smile... And where has that got us? You may think that we now live in an equal society, but the fact that the USWNT gets called out for being psyched that they were undefeated two years in a row, securing the U.S. its second consecutive title and fourth championship, a record-breaking achievement, makes it clear we still have a long way to go.

The call for equality could be heard loud and clear at the World Cup Final stadium, in Lyon, France.

A chant reportedly broke out at the stadium after the U.S. won, with the American crowd chanting "equal pay" over and over and booing ensued at the sight of Gianni Infantino.

The crowd also chanted: "put them in charge of training the men's team."

Jill Ellis, the USWNT coach who, despite being arguably one of the best, if not the best, soccer coach in the world, is paid significantly less than her male coach counterparts. Gregg Berhalter, the head coach of the men’s U.S. soccer team has refused to disclose his salary, but the fact that Ellis makes $34,000 less than Tab Rabos (who manages the men’s U21s) means that we can assume that Ellis makes significantly less than Berhalter.

Anyone who thinks that the U.S. men's team brings in more revenue is mistaken.

The age-old argument that the women's soccer team shouldn't make as much as the men are because men bring in more money is a load of codswallop.

Over the past three years, the women's soccer games have generated more revenue than the men's.

So who should get paid more?

I'll give you two options... Option 1: The team that generates the most money, wins the most games and tournaments, and is globally considered the best soccer team in the world. or Option 2: The team that didn't even qualify for the World Cup in 2018 and whose players partake in a league which is considered, universally, a league in which European players who are on the brink of retirement can well and truly shine.

I think that we’re done with: Are we worth it? Should we have equal pay? Is the market the same? Yada yada.

Speaking to the British newspaper, The Guardian, Rapinoe looked to the future, declaring: "Everyone’s done with that; fans are done with that, players are done with that. In a lot of ways I think sponsors are done with that. Let’s get to the next point. What’s next? How do we support women’s federations and women’s programs around the world? What can Fifa do to do that? What can we do to support the leagues around the world?" And, as for dealing with the haters that can't stand that Rapinoe and the other players are standing up for themselves and the future of women's soccer. Rapinoe says: "A little public shame never hurt anybody, right? I’m down with the boos." Only time will tell whether the pay gap will cease, whether working conditions will improve, and whether scheduling will be taken more seriously in future women's World Cup tournaments. Only time will tell whether the future of women's soccer will be nourished and supported by those that have the power to make the sport as respected and as acknowledged as the male equivalent. There's one thing that we know for sure, though, and that's the USWNT are sure as hell gonna give it a good fight.