Here's Proof That Dolly Parton Was, Is, and Always Will Be a National Treasure | 22 Words 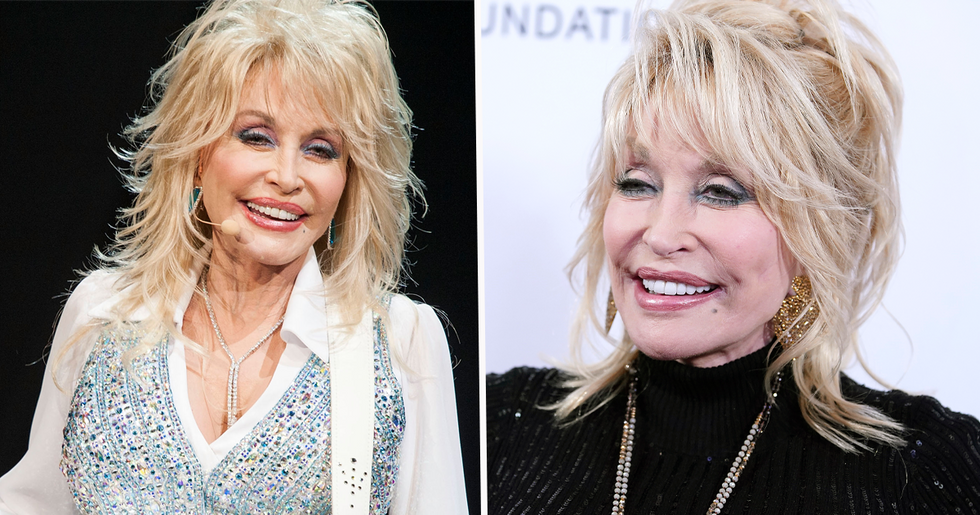 Here's Proof That Dolly Parton Was, Is, and Always Will Be a National Treasure

There's more than just one reason why Dolly Parton was, is, and will always be a national treasure. Here are some of the best ones...

It's no secret that we absolutely adore her.

It's one thing that we can all actually agree on.

There's no denying her power.

And she's proven her status over and over again. Here are some of her most iconic moments throughout her career.

Dolly congratulated Grace and Frankie for their nomination, and then added this:

"I just hope I'm going to get one of those Grace and Frankie vibrators in my swag bag tonight." And everyone had the same shocked but amused look on their face. It was pretty funny, to say the least.

Now, over the past few months, we've heard celebrities speaking out against the treatment of Black folks in society, but Dolly Parton took hers to a whole other level.

Apparently, some people found it so "offensive" that it led to a Dolly boycott.

This is what she said when the interviewer at Billboard asked her for her opinion on the social movement: "Of course Black lives matter. Do we think our little white asses are the only ones that matter? No!"

But Dolly knows what's up and we love her for it.

8. When she called out the sexism she faced when she was starting out in the industry.

Dolly's appearance is iconic, right? But that doesn't mean it didn't attract a lot of negative attention for the way she looked.

And as she got more confident with her look, she felt the need to call some people out.

In multiple interviews, she has talked about being defined by her makeup or her cosmetic surgeries, saying this: "I'd like to think I have a brain beneath this wig and a heart beneath the boobs."

But one particular interview stood out:

Sitting down with Reese Witherspoon, the country singer expressed her true thoughts on the matter saying "don't let these false eyelashes lead you to believe that I'm as phony as I look - Because I run true and deep." She's the ultimate bad b****.

7. When she talked about her fans dressing up as her.

The New York Times asked Dolly if she liked seeing her fans turn up to her concerts dressed up as her and her response was nothing short of heartwarming.

"When I do 'Jolene' and I see a bunch of drag queens out there, I start singing 'Drag Queen, Drag Queen, please don't take my man!' I have a huge gay following and I'm proud of them. Sometimes, some of them look more like me than I do."

Back in 2006, the Oscar for Best Original Song seemed like it was going to be an easy win for Dolly, but the hip-hop group Three 6 Mafia (who also became the first-ever hip-hop group to win the award) came through shocking everyone.

But Dolly wasn't bitter, she looked genuinely happy for them.

5. When she founded her reading program.

The country singer is not just concerned with her own career, as she has been involved in numerous charities to aid children and their own educational ventures.

The Dolly Parton's Imagination Library was started all the way back in 1990.

It aims to provide children with free books from the day they're born until they are 5 years old and since it was started, Dolly's sent over 141 million books to children around the world. Wow.

One of the best qualities is her humor. She's not afraid to have a little bit of fun whether it be on social media...

Or real life. Remember when she cracked this joke?

While filming on the set of 9 to 5, in between takes, she asked Jane Fonda, "Do you know what's green and smells like Miss Piggy?"

3. When she donated $1 million to fund coronavirus research.

Dolly made sure she did her bit to help us all throughout the pandemic, donating a whopping million dollars to Vanderbilt University Medical Center to help with scientific research into the virus.

2. When she exposed her husband.

While being interviewed for The Tonight Show Starring Jimmy Fallon, Dolly revealed that her husband was more excited about the fact that she was going to be working with Jennifer Aniston than she was because he had a massive crush on her. I mean, who doesn't?

But it seems as though his love goes beyond just a little crush...

"He can't even get it out to pee, much less get it up for three." And that sends Jimmy off his chair and straight onto the floor laughing. She just likes to keep things real with us.

1. When she denied Elvis Presley half the rights to her song.

She told us that Elvis really wanted to record "I Will Always Love You" but he also asked for half the publishing rights.

But Dolly wasn't up for that because she wanted to leave the full rights to her family.

So she rejected the collaboration in order to honor her morals. And then when Whitney Houston recorded the award-winning track, she knew she had made "the best decision."

So there we have it guys, Dolly Parton was, is, and always will be America's national treasure.

And if you want to read more about how the world is trying to "honor" her, then keep scrolling.