Here's the Awkwardly Sad Thank You Note That Donald Trump Jr. Got from His Dad After the Election | 22 Words 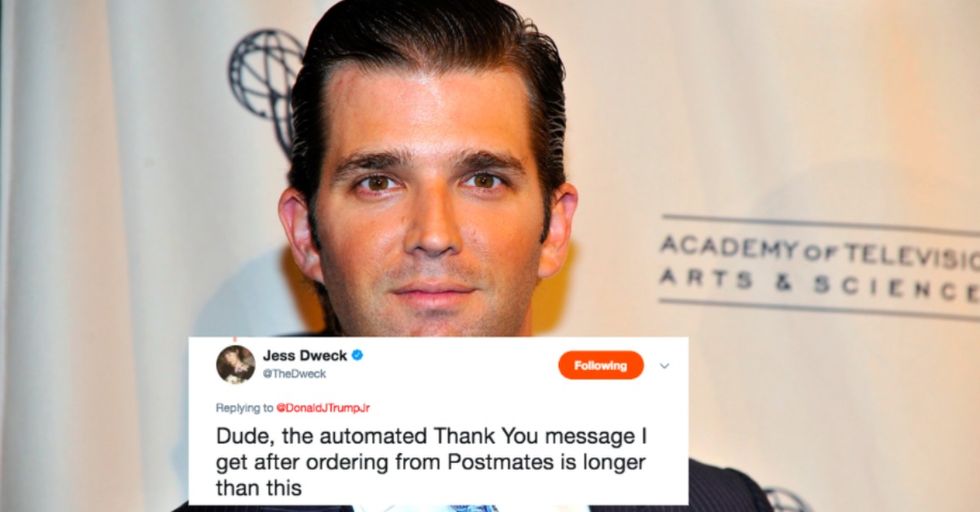 Here's the Awkwardly Sad Thank You Note That Donald Trump Jr. Got from His Dad After the Election

Poor Don Jr. He can't seem to do anything right, including getting his dad to love him. His latest tweet, shared on the anniversary of the presidential election, shows off the "thank you note" he got from daddy-o after his victory, and man it is harsh. It proves that not even dressing up in a skin-tight American flag costume with a rubber Trump mask was enough for Daddy Donnie. At least this time Don Jr. got the day right, eh? Because last time he tried to tweet about election stuff, he did not. Searching high and low for a silver lining here, folks.

It's a pretty well-known fact that Donald Trump had a fraught relationship with his father, Fred. So it's only natural that his own daddy issues would trickle down to his eldest son, Donald Jr.

And we all know how much Donald Trump loves it when things trickle down. When Donald Trump Jr. shared the thank you note his father sent him after the election, it dredged up those barely-hidden daddy issues, and guys, it's bad.

Here's the heartfelt gesture of love and appreciation Donald Trump felt was appropriate to give to his first-born son on the day he won the election to the highest office in the land:

"Don Jr. Great job! Thanks, Dad" Oof. Hits ya right in the heart that you definitely have and that Donald Trump definitely doesn't have.

The Internet immediately...actually felt kind of bad for Don Jr.

The callous cold note that took minimal effort and zero thought actually sort of explains the sociopathy that plagues every member of the Trump family. It would be so much sadder if they didn't use their power and influence to destroy everything around them.

@DonaldJTrumpJr It is so indescribably sad that you have to ask for an autograph from your dad to get his attention and approval
— Jess Dweck (@Jess Dweck)1510193615.0

While there's no confirmation that Don Jr. had to ask his dad for note, that might somehow be less sad than if Trump consciously decided this was the token of thanks he'd give to his son who tirelessly pushed his lies out into the world for months and months leading up to the election.

If we're being honest, this note is so painfully generic that we wouldn't be surprised if Tiffany also had one...and Trump hates Tiffany.

@DonaldJTrumpJr Dude, the automated Thank You message I get after ordering from Postmates is longer than this
— Jess Dweck (@Jess Dweck)1510204995.0

Of course, they were very different from Don Jr.'s tragic Sharpied disaster.

Ah yes, the old popular vote numbers, the ones that show how Hillary actually won the election by 3 million votes. Such fond memories of dashed dreams...

There's also this piece of memorabilia from Inauguration Day that we like to look back on and weep to every now and then.

Don Jr. may have gotten the worst note ever given to a child from their parent, but he's also an instrument in the destruction of American democracy and — wait, that's not how silver linings work, is it?