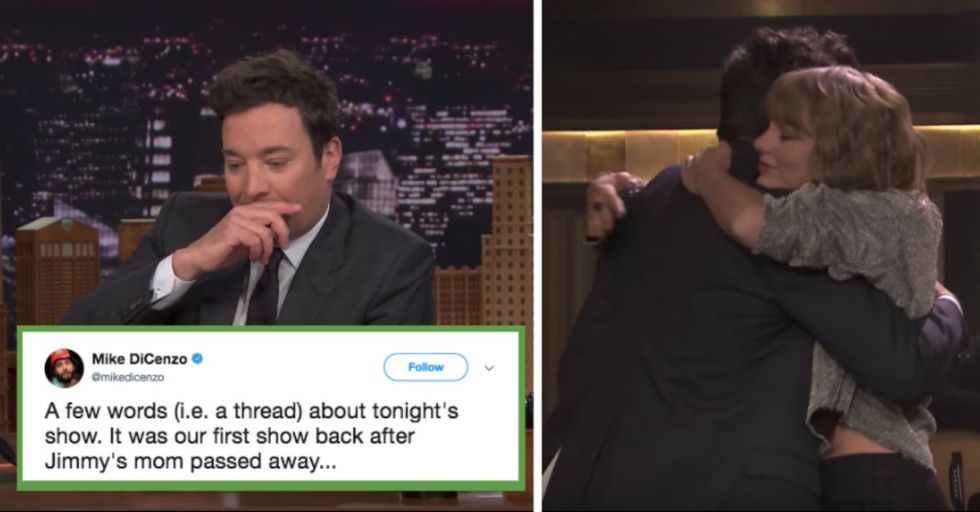 Earlier this month, late-night host Jimmy Fallon's mom passed away. Tapings of the show were canceled for a week to give Fallon time to grieve the loss with his family. Last night, Fallon came back to host an especially moving episode of the show. Taylor Swift also made an appearance (though she wasn't originally signed up to perform). About one minute into her song, Fallon broke down in tears. When you read why, you might, too.

Fallon opened last night's show with a touching tribute to his mother.

While choking back tears, Fallon said that when he was little, his mom would hold his hands as they walked to the store. Fallon's mom would squeeze his hand three times to say "I love you," then he would squeeze back four times: "I love you, too." "Last week, I was in the hospital at her side," Fallon said. "I grabbed her hand and squeezed, 'I love you.' I just knew we were in trouble." Fallon closed his monologue by saying "Mom, I'll never stop trying to make you laugh. I love you," and squeezing his hand in the air.

"You squeeze my hand three times in the back of the taxi." "New Year's Day" is the last track on Swift's new album, Reputation. It also features the line, "Hold on to the memories, they will hold on to you."

After the show aired, a writer and producer for Fallon's show name Mike DiCenzo shared the story behind Swift's performance on the show.

DiCenzo started by saying that it was a really tough day for the entire staff. Gloria was beloved not only by Jimmy but by everyone who worked on the show.

DiCenzo then revealed that Fallon had never shared the story about squeezing his hand with anyone on the show, which made the coincidental Taylor Swift lyric all the more compelling.

@questlove First, a quick word about Taylor Swift. She was not scheduled to do our show today. But we wanted someth… https://t.co/sol5hfs2Oe
— Mike DiCenzo (@Mike DiCenzo)1510635033.0

Not only that, but Swift wasn't even scheduled to perform on The Tonight Show that night. The show asked her out of the blue whether she'd be willing to be a surprise musical guest. "She said yes with zero hesitation," DiCenzo said.

When Swift sang the line about squeezing hands, Fallon was overcome with emotion.

"I nearly gasped," DiCenzo wrote. "Tears. I think everyone in the audience started sobbing. I could see Jimmy silhouetted at his desk dabbing his eyes with a tissue. We all lost it. It was a beautiful coincidence in a beautiful performance."

You can watch Swift's full performance in the video below:

After finishing her song, Swift gave Fallon a huge hug that DiCenzo said was filled with "100% real emotion." What a touching tribute. It looks like Swift's reputation isn't all bad, after all.