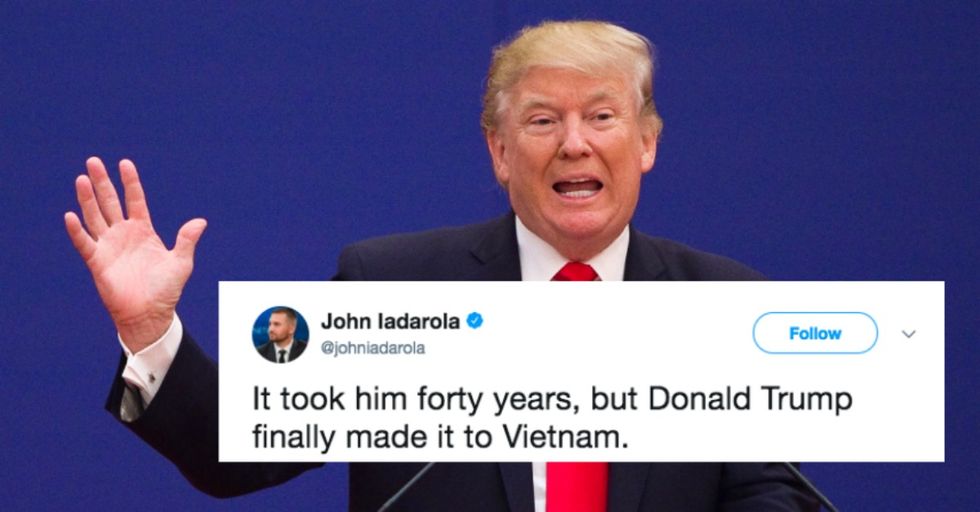 President Donald Trump is on his Asia trip, and last night he arrived in Vietnam. According to the Internet thought, that was a few decades too late! Trump famously got out of the Vietnam War draft because of "bone spurs" in his foot, a.k.a. being very rich. So when he tweeted that he finally made it to the Asian country, Twitter had a field day. The jokes practically exploded out of the website. There are many. And they are fantastic.

On the evening of November 9, Donald Trump tweeted that he'd landed in Da Nang, Vietnam.

This tweet was like a rallying cry for all of Twitter. People from comedians to journalists and everyone in between immediately started ribbing Trump for making it to Vietnam, the very place he worked so hard to avoid when there was a war going on.

There were the wistful looks back on the Vietnam trip that could have been... 40 years ago:

But alas, Trump was too busy deferring the draft to hop on over to Vietnam and defend his country at the time. Oopsie!

Funny, last time Trump was supposed to be in Vietnam, he suddenly had bone spurs.

Guess they're all cleared up now that you're president and there's no war? This is quite a curious fact, indeed.

Upworthy writer Parkey Molloy made a shocking discovery that really should have been obvious a long time ago:

Donald Trump is Frank from It's Always Sunny in Philadelphia. How did we not see it before? He's totally unaware of how he comes across to others, he exploits every single person he comes across, he overworks and under-compensates his employees, he's prone to spouting nonsense no one else can understand... All the signs are there.

And we are laughing!