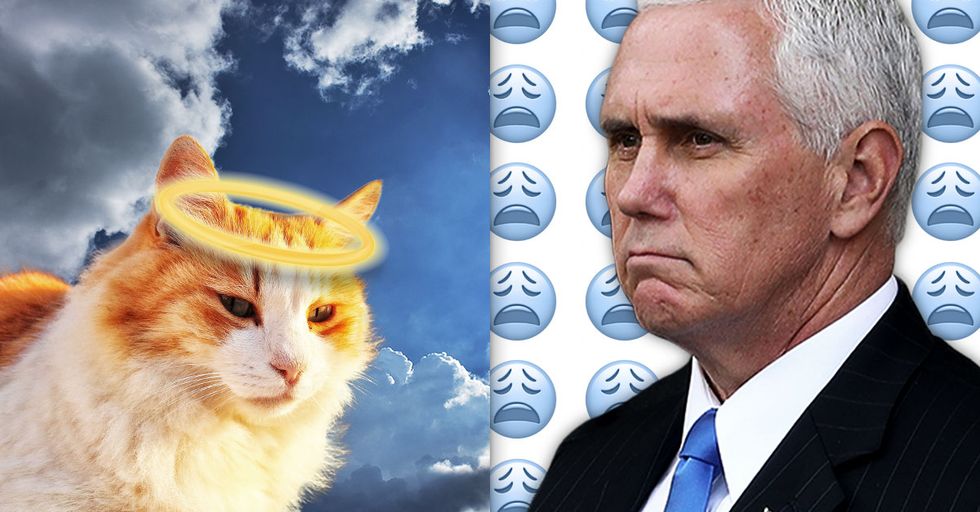 The Pences rescued Pickle more than 10 years ago, and she made the journey to Washington, D.C. with them in January.

Karen Pence announced the passing of Pickle on the morning of Thursday, December 7 via Twitter:

22 Words has received an exclusive letter written by Pickle, the Pence family's dead cat, to the Cat God, Garfield (yes, that Garfield). It is her plea to be accepted into Cat Heaven, a.k.a. the Big Alley in the Sky, and it's quite telling.
Dear Garfield, You probably heard that I, the Pence family cat Pickle, have died. I'm writing to submit my plea for entrance to the Big Alley in the Sky, the Furry Gates, Windowsill Paradise... to Cat Heaven.
I am the third Pence family pet to kick the bucket in 14 months. Fellow feline Oreo went first back in June. Then, two weeks before the presidential election, our canine brother Maverick left this Earth. If three pet deaths in a little over a year seem like a lot, that's because it is. We'd all just had enough and decided it was time to go. (That is, all of us except for Marlon Bundo, the Pences' rabbit. Fame has really gone to his head.)
But the rest of the Pence pets and I, well, we had gotten to the point where we'd rather be dead than be associated with Mike Pence anymore. I'm sure you can understand. Some think cats are moody are bad-natured, and we are, but let me be clear: We got nothing on the Vice President. He's the worst. Evil, even. And that's coming from a cat. In fact, Mike Pence was such a pain to live with that right after the election, I decided to end it once and for all. I threw myself off the roof of our home, but I just landed on my feet.
So I committed to spending my time on Earth torturing Mike Pence and his family to the best of my abilities. Not to lick my own genitals, but I was pretty good at it.
I scratched and bit my way through life, pooped outside the litterbox, and woke Karen up every morning at 4 a.m. because I didn't like her face. Below, I've included a couple pictures of me trying to escape the clutches of Mike Pence's daughter, Charlotte Rose...
"When we first rescued Pickle 15 years ago," Charlotte Rose wrote, "she had been neglected so she was scared and mean and almost never let us hold her." Wrong. I was scared and mean and never let them hold me because I knew I had been adopted by the family of one of the nation's most dangerous politicians. Plus, I have a thing about my paws.
Every single day, I killed a rat and left it on the Pence family's doorstep as a symbol of my true feelings about them, but I'm not sure they got the message. They would just toss it into the garbage can, along with the hopes and dreams of millions of Americans, without a second thought.
My life with the Pence family was beyond harrowing. Every time Mike called Karen "Mother," the hair on my back stood straight up. They believed I was spooked by something else, but no, it was definitely that. A hundo percent. But that's not all...
Every single time Mike Pence made a homophobic remark or advocated for "conversion therapy," I wept, for my own owner didn't realize that each night, he placed a crystal chalice of Fancy Feast in front of one of the very beings he so despises. That's right. I, Pickle, was a gay cat.
And don't even get me started on Mike Pence's complicity in the insidious Trump administration. Pence may be trying to act like a hurt puppy with this whole Mike Flynn/Russia thing, but if I had a hair tie for every time I heard Mike Pence whisper to Karen, "But Mother, once the elf and the orange man are gone, I will be president. I will hunt all the gays!" I'd be able to shuffle hair ties around the carpet until the end of eternity.
Lastly, if nothing else, I believe that I deserve a place in Cat Heaven simply for that one time I walked in on Mike and Karen in the bedroom. Even in death, my eyes cannot unsee the horror.
Almighty Garfield, I know my application to Cat Heaven probably has a bright green cucumber next to it (you know, because cats hate cucumbers), but I implore you to erase it and grant my entrance.
For though I did live out my life in the Pence household, I am not a Pence. I am Pickle, proud dead lesbian cat. Yours eternally, Pickle P.S. If it will help, I can totally bake you a lasagna. Not sure if you're really into those or if that's just a quirk they created for the show, but I'm quite skilled in the kitchen. For all her faults, Karen knew her pasta, and I learned from her.