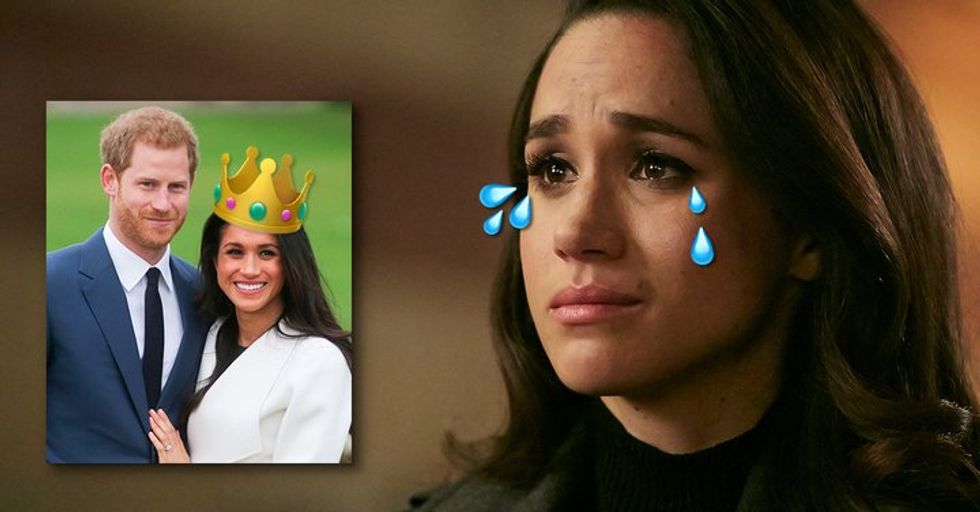 Prince Harry proposed to actress Meghan Markle this week! No one was surprised when she said yes to the proposal, but people were positively teary-eyed about the whole situation. It is not every day that an African American actress is marrying into the royal family.

But there's a layer to the story that is making people emotional for another reason. Meghan had to give up one of the most beloved parts of her life to make the engagement work.

Meghan has two dogs, which she adopted from a rescue center.

She said that Ellen actually convinced her to take one of her dogs home. She was in a shelter visiting Bogart (soon to be her first dog) when Ellen and Portia walked in. She didn't know Ellen at the time. Ellen asked if Bogart was Meghan's dog, and Meghan said no but that she was trying to decide whether or not to adopt him. Ellen said, "Rescue the dog!" so Meghan did. "It’s sort of like if Oprah tells you to do something," Meghan admitted. Did you hear that, Ellen? You and Oprah are on the same wisdom tier according to Meghan Markle.

After Meghan adopted Bogart, she decided that he needed a friend.

One of Meghan's friends found another little pup in Kentucky and brought it to her in Ontario. The shelter called him, "the little guy" in his paperwork, so she ended up naming him Guy. She said that she thought he was used to people calling him that already, so she just went with it.

The two pups are close friends.

Guy is a beagle and Meghan thinks that Bogart could be a lab-shepherd mix. She told Best Health that the dogs are "thick as thieves". Take a look at her Instagram and you'll see a swatch of photos of Markle snuggling with her rescue pups and spending time with them between acting gigs.

However, it looks like Meghan will have to separate the dogs because of her recent engagement.

In an interview for BBC News, Meghan let the unfortunate news slip. She said, "I have two dogs that I've had for quite a long time — both my rescue pups — and one is now staying with very close friends and my other little guy is, yes, he's in the U.K. He's been here for awhile."

She said that the dog that followed her to the UK is doing just fine.

But what about the one that is stuck in the United States? And why did she leave one of her beloved pups behind? A royal correspondent shed light on the split.

Some people think that the dog that Meghan left in the United States was too old to make the trip across the pond.

A representative from The Kensington Palace said, "it takes a toll on an animal to travel so far across Atlantic combined with the hard, long process of getting approval … it’s in the best interest of the animal’s well being to stay."

The UK has strict rules about bringing in animals.

If you want to bring your pet into the UK and it hasn't passed certain tests or gone through a strict vaccination regimen, it may have to be quarantined for up to four months.

The Kensington Palace representative said that the one dog will be permanently in the United States without its best friend.

They said, "[he] is going to permanently reside in North America with friends of hers...This is a permanent decision that Meghan made on her own — not an easy one at that." Meghan herself did not specify which dog would stay and which one would come with her, but Hello! magazine correspondent Emily Nash said that Guy followed Meghan to the UK and Bogart is staying with friends in the states.

People are heartbroken about this detail of the royal engagement.

Twitter user @SaveOurLions1 said, "Huge congratulations on the upcoming wedding of Harry & Meghan. Why is Bogart the dog being left behind? I find that incredibly saddening. Much loved dogs, why take one and not the other?" Another person, @jessEscape wrote, "Meghan is marring the 5th in line for the throne. SHE SHOULD BE ALLOWED TO HAVE BOTH HER DOGS!"

"Meghan Markle SPLIT HER TWO DOGS UP, SHE IS A MONSTER," wrote senior UK news reporter Ashitha Nagesh. We're torn up over that fact that these two cuties are now separated, but at least Bogart is still at a happy home with some of Meghan's friends. We hope she'll have time to go back and visit every once in a while. Apparently, Meghan has a way with dogs that aren't her own as well. Harry said that the Queen's corgis are taken with his new fiance. He said, "For the last 33 years I've been barked at, this one walks in and absolutely nothing. Just wagging tails."