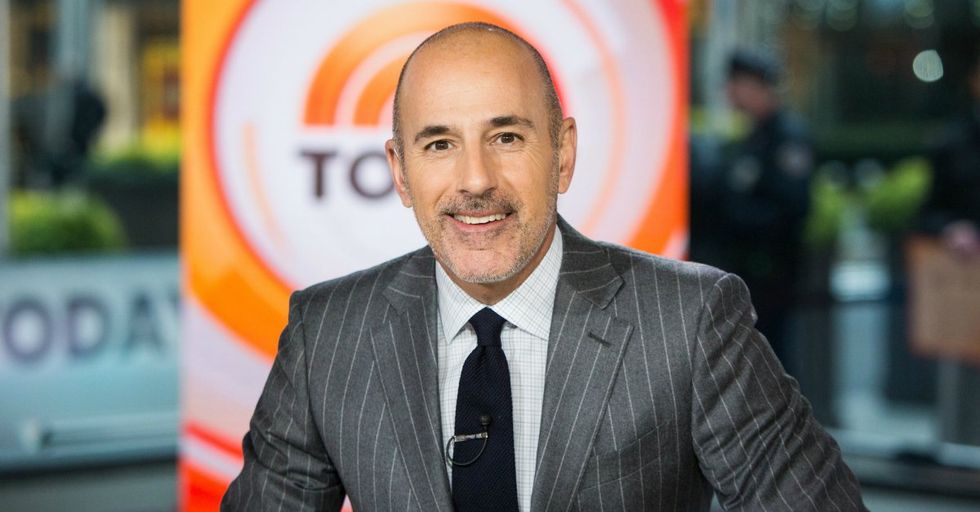 Matt Lauer has been a staple of American morning television for decades. Since 1994, he's been entering American homes each morning as an anchor and later host of NBC's Today show. But early in the morning on Wednesday, November 29, Lauer was abruptly fired from the position he's held for almost 20 years because of an allegation of "inappropriate sexual behavior" in the workplace.

Matt Lauer is one of the most recognizable news personalities in the United States.

He's conducted memorable interviews with some of the world's biggest celebrities and hosts the Macy's Thanksgiving Day Parade every year.

Matt Lauer has been — until now — one of the highest paid news anchors on television, raking in a reported salary of $28 million.

In addition to covering hard-hitting news, Matt Lauer was known as a sort of goofball on the Today show.

Lauer held positions at NBC News and NBC Nightly News before he joined the Today show. He's always been known as a reporter who can balance lighter stories with hard news, which made him an anchor (literally and figuratively) of the Today show for so many years.

The man is everywhere. He's been the face of NBC news for so many years and has in some cases come under fire for his performance in interviews and in his news coverage.

Now, he's in trouble for another reason.

Early on Wednesday morning, it was announced that Matt Lauer has been fired from NBC's Today show for alleged "sexual misconduct." Here's the story behind these allegations...

An employee filed a complaint about "inappropriate sexual behavior in the workplace" against Matt Lauer, prompting his firing from NBC.

While Lauer's firing was a shock to many viewers around the country, according to CNN, his Today show colleagues weren't completely surprised; multiple news outlets including The New York Times has been investigating Lauer's sexual misconduct for a while.

Savannah Guthrie, Lauer's co-host on the Today show for the last five years, made the emotional announcement on the program this morning:

Matt Lauer has been terminated from NBC News. On Monday night, we received a detailed complaint from a colleague ab… https://t.co/pxSqWaDy6q
— TODAY (@TODAY)1511957300.0

"All we can say is we are heartbroken; I'm heartbroken," a visibly shaken-up Guthrie said. According to The New York Times, the Today staff only learned of the news moments before going live. Guthrie continued, saying she was "heartbroken for the brave colleague who came forward to tell her story" and believes it's important for women to continue to come forward. But she was so obviously distraught, calling Lauer a "dear, dear friend" and asking, "How do you reconcile your love for someone with the revelation that they have behaved badly?"

The announcement of Lauer's firing was made by NBC News Chairman Andy Lack in a statement released Wednesday morning.

According to Lack's statement, the complaint of "inappropriate sexual behavior" was received Monday night, and as a result, they decided to "terminate his employment." "While it is the first complaint about his behavior in the over twenty years he's been at NBC News, we were also presented with reason to believe this may not have been an isolated incident."

Apparently, several women have come forward privately with complaints about Matt Lauer's behavior — even before the bombshell about Harvey Weinstein that started this snowball. But none of them would go public — they were too afraid of the power Matt Lauer held.

"Somewhere, Ann Curry just made her orange juice a mimosa," tweeted Ira Madison III, a writer for The Daily Beast.

This is a reference to a rumor from a long time ago that Matt Lauer conspired to remove Ann Curry from her position on the Today show years ago. Many on Twitter had strong reactions to Matt Lauer's firing. Among them, of course, was Donald Trump, the President of the United States...

He managed to make allegations of sexual misconduct against Matt Lauer about "fake news" and called for the firing of top executives at NBC and Comcast for "putting out so much Fake News."

But he wasn't done yet.

Donald Trump, the President of the United States, took Matt Lauer's firing as an opportunity to attack other supposed "liberal" news personalities.

But there's an issue with Trump being so vocally critical of Matt Lauer for sexual harassment, and CNN's Ana Navarro succinctly sums it up:

Nearly every "member of the liberal elite" who has been outed as a sexual predator has been fired from their jobs, have faced actual consequences for their actions. Meanwhile, Donald Trump — the disparager himself — who has been accused by dozens of women of rape, assault, and/or harassment, still remains in office.

It was a bold move for the president to chastise Lauer and others so openly.

He's still supporting a pedophile, Roy Moore, for Senate, and he himself is a sexual predator. Let's hope the woman or women who come forward against Matt Lauer continue to pave the way for more victims to share their stories and out their abusers.