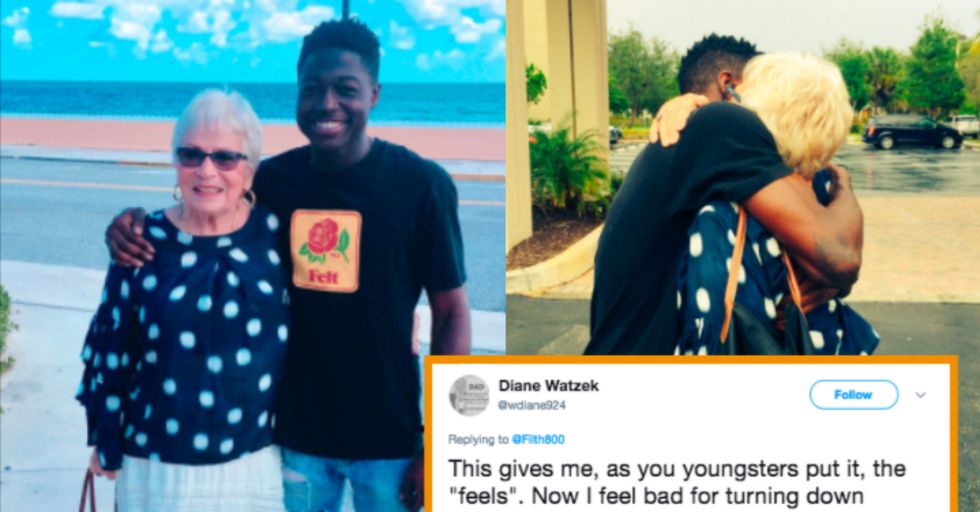 We've all heard some of the horror stories associated with the Internet. You never truly know who's on the other side of that Internet connection. But every once in awhile, we get to share stories about the brighter side of the Internet. Like people coming together to help a sister give her brother the best Christmas present. Or Twitter followers banding together to help a guy come up with an excuse for sharing an inappropriate photo with his mom (Hey, it happens). Sometimes, the Internet can make incredible things happen. Like in today's story about Spencer and Roz.

This is Roz and Spencer.

Roz and Spencer are friends.

But they're not just any kind of friends. You see, they met in a very specific and special way that probably never wouldn't have happened without certain technological advancements.

They've played more than 300 games of Words With Friends together!

In case you're not familiar, Words With Friends is a mobile app tha lets you play a word game with random people from all over the world. You can also play with your actual contacts, but that's obviously not as much fun.

You play letter tiles to create words, then your opponent does the same. By the end of the game, you have a giant collaborative crossword puzzle. Roz and Spencer have played more than 300 games together since last summer.

This past weekend, they finally got to meet in person!

Amy Butler, a pastor at Riverside Church in Manhattan, arranged for Roz and Spencer to finally meet. You might be thinking that Roz schooled Spencer in this specific word game. Spencer quickly put those rumors to rest...

But you can see by their average scores that they're actually pretty well matched. Regardless, we're sure that they were both surprised to get a real friend out of a game with a randomly selected Internet stranger!

Since Spencer posted his pictures with Roz, their story has gone super viral.

The official Words With Friends Twitter account even responded to their heartwarming story! We love it when people come together to make amazing things happen. Sometimes it's just a word game. But other times, it's an entire friendship!

As you'd expect, the Internet is in love with the friendship between Roz and Spencer.

We need more stories like this. Guess it's time to open that Words With Friends app again, right?

Apparently, Spencer and Roz aren't the only people who have forged a real connection through the Words With Friends app.

Maybe Words With Friends should start a dating app! After all, there's nothing more attractive than a person who knows how to spell words correctly, right?

We've all learned a very valuable lesson from Roz and Spencer.

Friendships can be formed in even the most unlikely places, and you never know when that game request might lead to something more. We'll certainly be keeping our eyes open for potential friendships in our own games from now on.