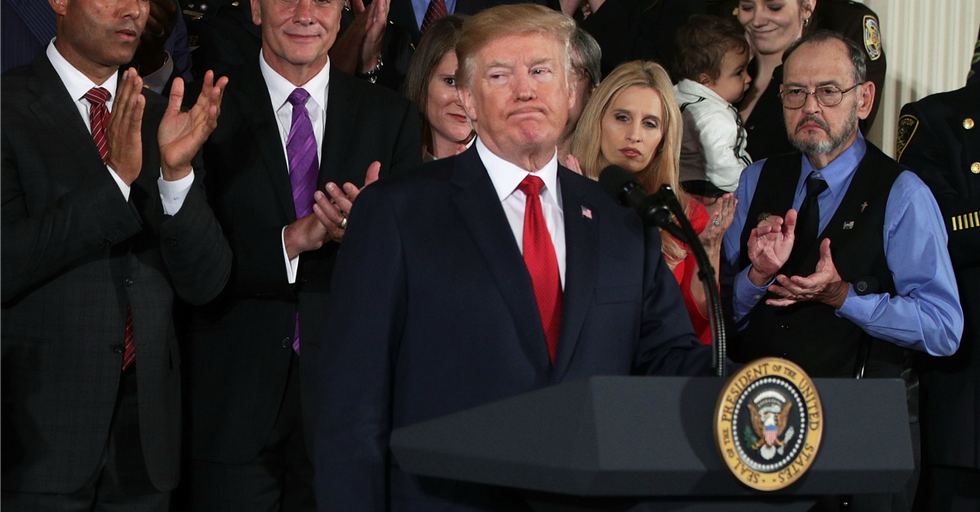 Donald Trump is notoriously sensitive about his approval ratings (and most things, for that matter). The last time his ratings tanked at the six month mark in July, the president tweeted "The ABC/Washington Post Poll, even though almost 40% is not bad at this time, was just about the most inaccurate poll around election time!" And no one can forget how he reacted to the revelation that his inauguration crowds were not as large as President Obama's.

*Psst* He personally hunted for the person who tweeted the side by side comparison.

This week, the NBC News/Wall Street Journal came out with a new presidential approval ratings poll.

It found that 58 percent of people disapproved of the job the president is doing, which means that only 38 percent of people approve of him. Even worse, today's daily Gallup poll, which polls about 1500 adults daily, shows him at 33% approval.

Both approval ratings were aggressively bad.

In fact, the  NBC News/Wall Street Journal rating is "the lowest in modern times for a president at this stage of his presidency" according to Mark Murray of NBC News, who further broke down the numbers, stating, "the drop for Trump has come from independents (who shifted from 41 percent approval in September to 34 percent now), whites (who went from 51 percent to 47 percent) and whites without a college degree (from 58 percent to 51 percent)."

While these low numbers may seem without precedent, other presidents have had bad numbers, which predicted poor outcomes for their presidencies.

As Ryan Struyk and Sam Petulla of CNN explain, "The previous instances of an approval this low came toward the end of Harry Truman's term, before the resignation of Richard Nixon, near the failed re-election bids of Jimmy Carter and George H.W. Bush, and the end of George W. Bush's term."

Interesting, right? But if you consider what has happened in the past few weeks, you'll understand why Trump's rating is currently so low.

Trump has been buffeted by disaster after controversy after disaster – most of them of his own making. As you'll recall, he lied and said that past presidents didn't call the families of fallen soldiers. Then he lied about his conversation with the widow of a fallen soldier (now there are questions about the circumstances under which the soldier died). To cap it all off, TWO Republican senators condemned him and his administration just last week. Tough week for Trump, eh?

At least there was one bright spot in the new polls.

People approve of his handling of the economy by 42 percent, which is great... until you consider Trump literally has nothing to do with the economy's continued prosperity. After all, it was President Obama that put the economic policies into place.