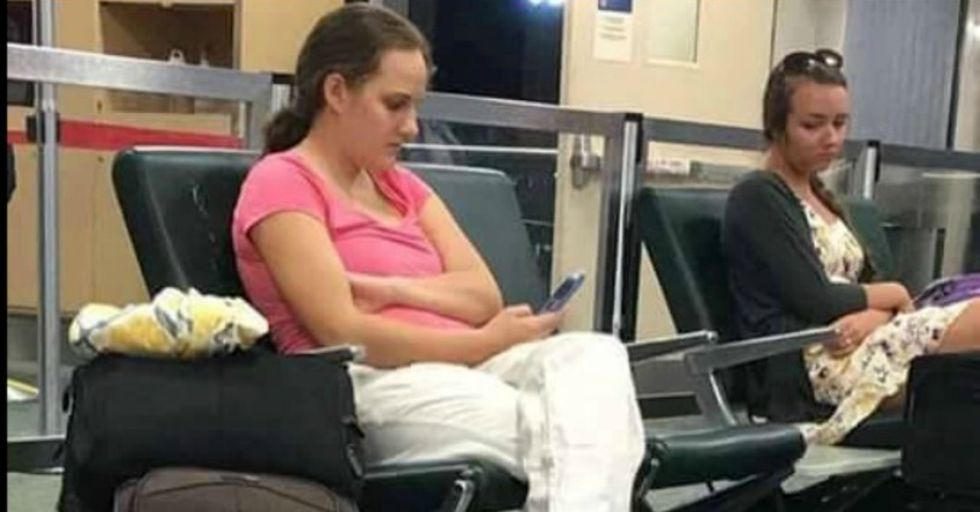 A little over a year ago, someone posted a picture of a mother and her young baby at the airport. The baby is on a blanket on the floor, while the mother holds her cell phone. Many who saw the photo immediately judged the mother, thinking they saw a picture of a neglectful parent. However, Molly Lensing — the mother depicted in that image — has recently shared the context to the photo.

Let's just say it'll make you think twice next time you start to jump to conclusions.

Last year, someone took this picture of Molly Lensing, a part-time pediatric nurse, and her two-month-old baby daughter, Anastasia, at a Colorado airport, without her permission, and shared it online.

Whoever took the photo uploaded it to social media, where Lensing was ridiculed as being a terrible mother for ignoring her child on the floor while she looked at her cell phone. In the image above, the caption reads, "Albert Einstein said, 'I fear the day that technology will take on our humanity...the world will be populated by a generation of idiots.'" (Just so you know, Einstein never said that. But we digress...)

The photo quickly went viral and people began leaving comments on it condemning Lensing for her "bad" parenting choices.

They took one look at the photo and jumped to all kinds of conclusions. We've all done it. But as it turns out, there was way more to the story than what a single picture could communicate (surprise, surprise...).

In a recent interview, Lensing provided some additional context to the photo.

"We had the unfortunate luck of being stuck in the middle of the Delta computer shut-down," Lensing told TODAY. Her daughter Anastasia was only 2 months old at the time and had already spent hours her carrier while Lensing's flight was repeatedly delayed and rebooked. "My arms were tired. She needed to stretch," Lensing explained. "And I had to communicate with all the family members wondering where the heck we were." She made the decision to let Anastasia stretch out on the floor rather than remain cooped up in the carrier. That's when the photo was taken — without Lengins's permission or consent. After it went viral, Lensing feared for her job as a pediatric nurse. "I had recently started working on the labor floor, and I was terrified of my coworkers or boss seeing the photo and comments and believing that I should no longer work with infants," she said. Thankfully, that didn't happen.

Since revealing what was actually going on in the photo, thousands of people have shown their support for Lensing.

Her own post sharing the interview has hundreds of comments, many of them from parents who are completely sympathetic to Lensing's plight. Traveling with young children is difficult under the best circumstances! Massive computer issues and delays just make things way worse.

So let that be a lesson to you.

(As if we needed another lesson in not being quick to judge.) Before you jump to conclusions, remember that there's often more to a situation than what meets the eye. Have a little empathy. We're all just doing our best.