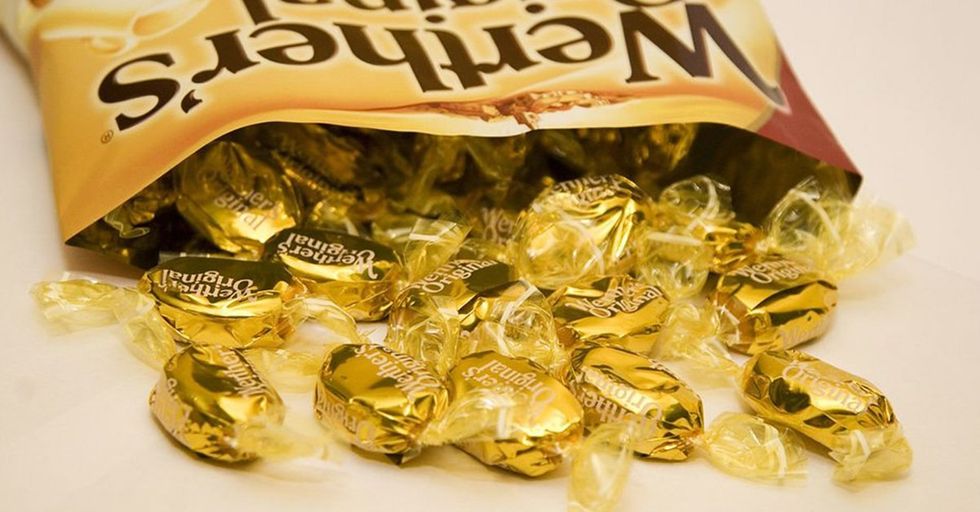 Here's What Every Single Grandma Has in Her House

For many people, going to Grandma's house was always something you looked forward to. The rules were different there, and you were much more likely to get a little spoiled. During my own childhood, Grandma's house was the only place in my life where I could watch cable– so I was always looking for an opportunity to visit. (Plus, she let me watch Power Rangers and eat margarine instead of real butter.)

For whatever reason, it seems like a lot of people's grandmas had the exact same items in their home. It's almost as though there is some official "Grandma Package" that is bestowed on someone as soon as they gain grandchildren in their life. How else can you explain the fact that we all recognize the following items as things found at Grandma's house? Maybe we all had the same grandma. Did you guys watch Power Rangers at her house, too?

How many of these things do you recognize from Grandma's house?

Always this candy. It was usually stuck together in a bowl and it was nearly impossible to get a single piece out. Also, there was probably a fair amount of dust in there.

Grandparents love birds. That's just a fact. They especially love the sounds of fake bird every hour, on the hour.

I have to assume this was the ONLY available Christmas decoration one year. That's the only way it makes sense that every single grandma in the world has it.

It was probably one of the only "toys" your grandma had for you to play with. Mine also kept a box of wooden embroidery spools because I grew up in Little House on the Prairie, apparently.

We would always sit on the kitchen floor and try to toss the magnets onto the fridge. I'm assuming you did, too. Since we had the same childhood, and all.

A jar of buttons:

Not only was this jar super handy if you ever happened to lose a button; it was also a lot of fun to play with. I would always sort the buttons by color and size. Man, I really did grow up in Little House on the Prairie.

A cabinet full of nice dishes:

That you never, ever, ever used. And it always rattled slightly when you walked by.

That never contained cookies. It was always either sewing supplies or crayons.

You recognize it, right? How can that be?!

#TodaysKidsWillNeverKnow The struggle of sliding off or getting stuck on your grandma's plastic covered couch😩😂 http://t.co/qgt0jCv8PH
— Chae (@Chae)1436967663.0

Or maybe it was an entire extra living room that you weren't allowed to go in, ever. For some reason.

This one I can get behind. First of all, it's a good way to recycle perfectly good containers. Secondly, it means you're buying the right amount of Cool Whip in your life.

She also tried to slip you money like this:

Although for me, it was usually a 1- or 5-dollar bill. None of this 100-dollar nonsense.

Again, this is a great way to recycle! But it does make it tricky to actually find the margarine.

Kool-Aid always tasted better when you drank it out of one of these things.

If you listen closely, you can still hear the sounds this toy made. You can also feel the frustration when the dang fish failed to clamp onto the little plastic ball at the end of the line.

Your grandma probably got these cups specifically for you to use whenever you were visiting. Isn't that the most heartwarming thing ever?

I swear I have actively looked for these candies and not been able to find them anywhere. There must be some secret Grandma Depot that sells them.

Which she miraculously had all of the containers and all of the lids for. How did she do it? Grandmas are magical.

Seeing this pattern is like being instantly transported back to my youth. I can almost taste the margarine and hear Power Rangers in the background.

It always made you feel like you were about to fall backward when you rocked back in it. It was such a thrill!

At my Grandma's house, it was a random episode of Teenage Mutant Ninja Turtles, Mickey and the Beanstalk, and a bunch of animated Bible stories. Slim pickings.

There were three different brightness levels, and you probably got yelled at for playing with it.

This "Shoot the Moon" game:

I'm pretty sure that this was impossible to win. That's what I tell myself, anyway.

I remember eating off of these while watching Judge Judy. I guess my Grandma was training me to be a grandma someday.

These things worked much better than a broom and dustpan. Can you still buy them somewhere? I think I need one.

It buzzed super loudly whenever you turned it on. It was also probably covered in doilies and ceramic figurines.

I think that this style of sofa appears in every grandmother's basement as soon as their first grandchild is born. That must be how it works.

You probably spent hours of your life watching it "rain." Because you were cool like that.

The quintessential grandparent candy. We couldn't have a list without these!

Or maybe spoons. Definitely something that never got used, though. Share this with your siblings and cousins to see how many grandma treasures they recognize!