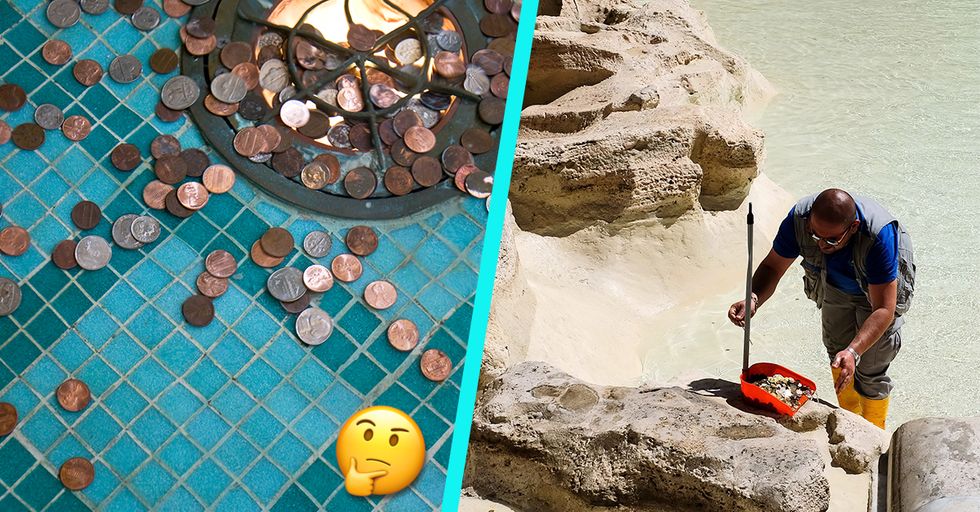 We all grew up occasionally tossing a penny into a fountain and making a wish. But did you ever stop to think about what happened to that penny after it landed with a "plunk!" in the fountain?

Obviously, first it sent a message to the wish-fulfillers in the universe and made your dream come true, but we're talking about after that. Everyone's wishing pennies have to get removed at some point, otherwise, the floor of every fountain in the world would be covered piles of coins that were hundreds of feet tall. But where do they go?

Now we have the answers.

There are so many questions that apply to our everyday lives that we consistently forget to explore the real answers to.

Why is the sky blue? Turns out, we know why. What does the "E" in Chuck E. Cheese stand for? (It's "Entertainment." The mouse's name is Charles Entertainment Cheese." What is bitcoin? We'll never know.

One of life's seemingly eternal mysteries is what happens to coins after people throw them in fountains to make wishes.

We've all done it! The idea of a wish-granting fountain probably has its origins in the older idea of wishing wells, which popped up centuries ago in European folklore. It's nearly ubiquitous now — you can find people tossing coins into fountains and making wishes all over the world!

But what happens to those coins? There's no way they can stay in those fountains forever.

It turns out, there are several things that happen to the coins people throw into fountains. Writer Adam Chandler conducted his own investigation for The Atlantic and published his findings.

Turns out, the coins in many fountains are collected by workers every few weeks.

If there isn't much money in the fountains, a lot of times, the workers are able to keep what they clean up!

Sometimes, the parks departments get help from the residents of the cities and don't have to clean the fountains at all.

In New York, it's apparently pretty common for "entrepreneurial New Yorkers" to scoop up change from the fountains when they need it. How about that?! You could be treated to your morning bagel by the fountain change! But that's not the only way coins escape the fountain floor...

In many places, the coins are plucked out by the homeless or other needy people.

This benefits them and saves the city from having to use resources to clean them out. Seems like a win-win!

Occasionally though, so much coinage builds up that the cities have no choice but to clean it out.

In the cases where there's a good chunk of change hanging out in the bottom of a public fountain, the money usually goes toward the maintenance of the fountain, which are generally kept up by nonprofit organizations.

Of course, the most famous fountain in the world to do your wishing in is the Trevi Fountain in Rome.

It has appeared in some of the most classic films of all time, including Fellini's La Dolce Vita, Three Coins in the Fountain, and The Lizzie Maguire Movie when she goes to Rome and gets mistaken for a famous Italian pop star.

An incredible amount of money gets tossed into the Trevi Fountain on a daily basis.

The fountain floor sees around $4,000 worth of coins every single day. That's a lot of coins. There's no way all those the coins can just be left in the fountain every night.

So what happens to them?

Do they go toward keeping that fountain majestic and bright? Nope! Do they get collected and kept by fountain cleaners who must be super rich by now? Not exactly...

Coins from the Trevi Fountain go toward funding a supermarket set up in Rome to feed the homeless and needy population in the city.

The food is given away free of charge to families who need it. In fact, coins from the Trevi Fountain generated over 1.4 million euro for charity in 2016. That's some serious wishing cash. So don't worry — if your fountain wish doesn't come true, you're probably helping someone else's come to fruition.

Rome did have its own "entrepreneur" for a while there, though.

According to Chandler, for more than three decades, Roberto Cercelletta collected as much as $1,000 from the Trevi Fountain every day. He was eventually outed by the Italian press and ultimately arrested in 2002, but not before he made bank from other people's wishes.

We've covered what happens to coins that are thrown into public fountains, but what about private fountains?

We're talking about the ones in Disney World, malls, and other privately-owned spaces. Those often collect more money than public fountains because not as many people reach in to take coins out.

It turns out much of that money goes to charity as well.

At the Mall of America, charities can apply to scoop up a portion of the $24,000 that they collect from their fountains every year. Coins from fountains at Disney parks and Vegas casinos also usually go to charities of the organization's choosing.

So there you have it, folks!

One of life's little mysteries — solved! Now go throw a penny into a fountain and wish for the answers to every other burning life question.
20%