And yet, here we are, one day from the race and Roy Moore is still in the running. | 22 Words 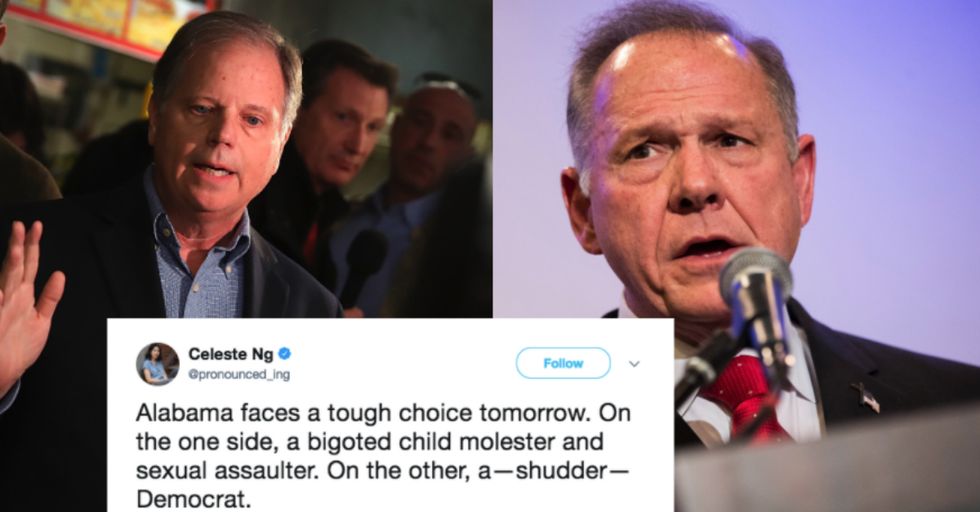 Tomorrow on Tuesday, December 12, Alabama will vote for its next U.S. Senator. The choice is stark — on one side is Democrat and progressive politician Doug Jones. On the other is confirmed pedophile Roy Moore. The fact that no one knows what's going to happen in tomorrow's race says a lot (OF BAD STUFF!!!) about where we stand as a nation right now.

It may not seem like a big difference, but at this point, any little spark of positivity helps.

Roy Moore is a danger to society. And he's way closer to becoming a U.S. Senator than any pedophile should be.

The race for the Alabama Senate seat became a matter of national attention when the Washington Post published a bombshell report detailing allegations from four women of sexual misconduct by Roy Moore when they were teenagers and he was in his 30s. The report should have destroyed his prospects of getting elected, and when it didn't, the subsequent reports of his behavior from four more women should have put the nail in the coffin.

And yet, here we are, one day from the race and Roy Moore is still in the running.

Doug Jones, his opponent, has held a lead here and there, but the ethical choice Alabama voters will make tomorrow is still too uncertain. When Donald Trump formally endorsed Roy Moore last week, the President of the United States didn't exactly sink to a new low — rather he confirmed his spot at the bottom of the heap when it comes to human decency.

There's no time to dilly dally any longer — the race is here and the choice Alabama makes tomorrow is one of the most serious in recent American history.

Barack Obama implored Alabama voters to reject Roy Moore at the polls tomorrow, according to CNN. "This one's serious," he said. "You can't sit it out." If Roy Moore wins the Senate seat, it is a win for sexual predators. It is a win for child molesters. It is a win for Donald Trump, who is both of those things. It is a statement to the people of the United States that despite months of justice finally being served for countless women who've fallen victim to sexual predators, the country puts prejudice over justice. That you are not safe. That your own nation won't fight for your life.

Roy Moore has proven time and again that not only is he unfit for office, he's unfit to be allowed to roam the Earth unpunished.

He is as homophobic as they come and he recently said that America was better when there was slavery. No joke. The guy is super racist, super intolerant, and super into touching little girls. Those are three very, very, very bad qualities, and yet he is this close to winning a race in which people, real people who live in America and have been privy to this news, will vote for him. It almost makes you lose hope. So in case you live in Alabama, or you know someone who lives in Alabama, let's make it crystal clear for the people in the back...

Alabama faces a tough choice tomorrow. On the one side, a bigoted child molester and sexual assaulter. On the other… https://t.co/oDd0jbp24v
— Celeste Ng (@Celeste Ng)1513014246.0

Roy Moore molested a 14-year-old girl. Doug Jones wants women to have the right to choose what to do with their bodies.

It's pretty cut-and-dry. Look, abortion is a hot-button issue, and you might not like that Doug Jones wants women to have autonomy. But even if you believe in enslaving women through policy, you probably still don't believe that little girls should be traumatized forever by men twice their age. If you do, if you're like these people, then you are wrong. Plain and simple. The legal age of consent in Alabama, today and back when Roy Moore was preying on teenagers, is 16.

Roy Moore's homophobia and intolerance know no bounds. He actually refused to debate Doug Jones "because of [his] very liberal stance on transgenderism and transgenderism in the military and in bathrooms." If elected, Roy Moore would represent the transgender people of Alabama, and so the fact that he refused to even discuss this part of the population with his opponent makes him unfit to represent the people in his state.

Roy Moore thought America was better when there was slavery. Doug Jones is a civil rights activist who has spent much of his career fighting racial hatred and striving for equality.

Roy Moore's racism is not a secret. In addition to the slavery comment, Moore recently said that we'd be better off if amendments to the Constitution after the 10th were abolished. Just in case you've forgotten, the 13th amendment ended slavery, the 15th protects black voting rights, and the 19th gave women the right to vote. Moore wants to rid America of those advances. On the other side of the coin, Doug Jones dedicated much of his professional life to fighting for racial equality. In the late 1990s and early 2000s, he successfully prosecuted two Ku Klux Klan members who were responsible for a 1963 Birmingham church bombing that left four African-American girls dead. Alabama's only chance for fair representation of all of its people is to elect Doug Jones.

Roy Moore was banned from a shopping mall in the 1980s because he had a habit of preying on teenage girls. Meanwhile, Doug Jones is concerned about tax reform and LGBT rights.

Roy Moore has been banished from malls and community centers, fired twice for ethics violations, and suggested that 9/11 was a punishment from God. His opponent Doug Jones, meanwhile, is a pretty regular politician. He's worried that the GOP tax bill gives too many tax breaks to the rich and doesn't appear to make cuts for the middle class. He supports equality and unlike the religious Roy Moore, does not believe that homosexuality should be illegal. (Honestly what century is this?) But we're not done yet...

He's praised Obama's Affordable Care Act and knows that it has done so much more good than harm. His website says that he is "disturbed about the repeated efforts to repeal the bill or weaken it," which would leave tens of millions of Americans without vital coverage. Doug Jones knows our country is broken and wants to help fix it. Roy Moore is one of the reasons our country is broken.

So what are we, America? Are we going to elect Roy Moore or Doug Jones?

Are we Mad Max: Fury Road or just the original Mad Max, which was just as dystopian but had fewer Earth-shattering explosions because the special effects weren't as good?

Are we Hunger Games the book, which was gritty and grim and disturbing?

Or are we Hunger Games, the movie, which was a little bit glossier and not quite as devastatingly sad as the book? Look, either way, we're in a fiery pit of darkness (I know, the fire should give the pit some light, but somehow, it doesn't).

This election is a matter of if we choose to sink ourselves lower into the pit in which we now live or if we slowly but surely start to journey back to the surface.

It's going to take a lot of work to get to a healed and progressive place again.

But the next thing we can do to ensure we jumpstart that path is to elect Doug Jones to the Alabama Senate and to let Roy Moore crumble into obscurity (or jail, jail would be good too). Next up: Donald Trump's resignation. Women are leading the fight for what's right. And if Donald Trump goes, that'll really poke a hole in the darkness.