Here's What Prince George Wants for Christmas, According to His Adorable Handwritten Wish List | 22 Words 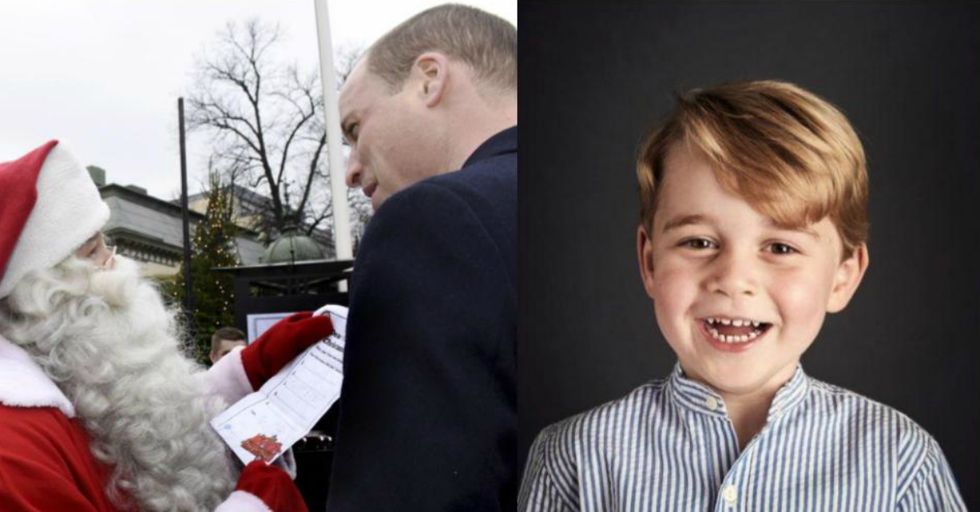 Here's What Prince George Wants for Christmas, According to His Adorable Handwritten Wish List

Most little kids wait the entire year to write their Christmas list. They spend spring, summer, and fall on their very best behavior, in hopes that Santa Claus will deem them "nice" instead of "naughty" and they'll get all of the toys their little hearts desire.

But if you're a prince and actual royalty, what in the world could you possibly want since you seem to have everything already? Well, Prince George of Cambridge knows exactly what he wants, and it's just one thing. It's also probably not what you might expect.

This is Prince George of Cambridge, third in line to the British throne.

He's also maybe the absolute cutest child. Can you seriously even take that little smile?

But it makes sense, since he comes from what can largely be considered a near perfect family.

They even color scheme together as they walk holding hands. Oh, and don't worry because Princess Charlotte, his younger sister, is just as cute as he is.

But let's be real...Prince George is really dang cute.

And he's already growing up so quickly! Back in September, Prince George attended his first day of primary school.

One has to stop and think, now that he's in school, will his classmates call him "Prince George"?

On his first day, Prince George arrived with a backpack that had "George Cambridge" on it. It was reported that this is what he'll go by while at school. So basically, despite being royalty, he's just like any other little kid.

Except the fact that he's an internet meme.

It's hard to not be obsessed with him, and we all know how the internet blows things up immediately. Since he's so adorable and makes hilarious facial expressions all the time, it's no surprise that he's a classic reaction picture. Keep reading to find out what Prince George asked for.

The cuteness doesn't end with a bunch of wonderful internet memes of the palace's expressive prince.

While Prince William was in Finland for a two-day official visit, he bumped into Santa Claus himself. And since he's such a good dad, he decided to personally deliver a handwritten letter from Prince George.

It was Prince George's Christmas wish list for the upcoming holiday.

Prince George is 4-year-old of simple tastes. He didn't list out a bunch of toys. In fact, he did quite the opposite.

He really only wants one thing for Christmas, and that's a police car.

Which is a totally standard request for the Prince of Cambridge. He even left the other lines on his Christmas list blank, because really, all he needs is a police car.

Prince George also marked himself as having been "nice" this year.

Prince William told Santa, "I’ve seen you and I had to give you this letter. He hasn’t written down many requests, so I think one request is probably okay." What a thoughtful little boy, only requesting one thing.

We have to wonder what Princess Charlotte wants for Christmas. Maybe to be turned into as many memes as her brother?