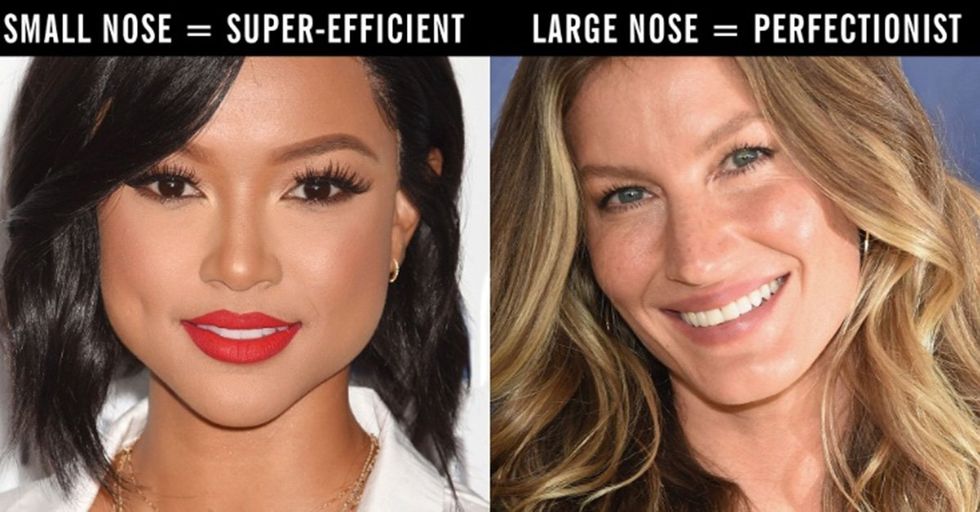 Here's What the Shape of Your Nose Says About Your Personality

Your face reveals a lot more than you might realize. For instance, it can "tell you things about your physical health, personality, and a certain time in your life."

That's coming from Jean Haner, the author of The Wisdom of Your Face, a book that explains what certain features mean to you and those who see you. Apparently, different facial features speak to your personality at different points in your life. Your forehead reveals things in your '20s, eyes in your '30s, mouth in your '50s, chin in your '60s, jaw in your '70s and the sides of your face in your '80s and '90s. But what about your '40s? Well, that's when your nose tells the story. So figure out what type you have from the pics below and see what your nose shape is telling others about you...and see if it's telling the truth!

Large, but not bumpy or bony.

This means that you're enjoying power and success in your '40s. It also means you like to be in control and can read peoples' energies easily.

This means you're a perfectionist and like to be in control. You also might like to be alone a lot, even though you have an easy time figuring people out.

This signifies that you're a little laid-back and enjoy the arts. Says Haner, "They also tend to work really hard and like spending their hard-earned money on things that allow them to enjoy life."

"People with these types of noses are more efficient with their work and would rather work smart, not hard. They're not necessarily perfectionists, but they're not sloppy with their work either. And they often get frustrated with people with large noses, since large-nosed folks can't always let things go," says Haner.

These are indicative of friendly folks who are often family-oriented. You'll enjoy success but without as much power as some other types.

Medium size with no bumps.

You'll have an easy road to success, supposedly. "In Chinese facial reading, the more perfectly formed the nose is, the more positive the time in your '40s will be," says Haner.

Scooped with an upwards pointing tip.

Haner says about this type, "These types of people also really enjoy holidays and family memories, and they'll lend money to a friend or family easily, and always get paid back for their generosity."

A nose that hooks down at the end.

"If your nose turns downs, it means in the end of your '40s, you're meant to slow down, but if you push yourself and don't relax, you might end up feeling like the rug has been pulled out from under you," Haner says.

If your nose juts out at the tip.

This means the end of your '40s will be more eventful than the beginning or middle. If it's pointy, you strive for perfection. If it's rounder, you're more easygoing.

This signifies vulnerability but also that you're very emotive and wear your heart on your sleeve. Unfortunately, with this type of nose, it suggests that the end of your '40s could be a bumpier ride than earlier years.

If it comes about as the result of an accident, you could be facing a big change. Haner states, "This is, according to Chinese face reading, because you had the accident, your destiny changed and you now have to learn a lesson in your '40s that will make you come out on top."

Lines across the tip.

This means you can expect a big change in your life in your '40s, but it could be positive or negative.

Bulbous tip at the end.

If you're like this, you enjoy the pleasures of life. But that also means you might ignore the consequences of your actions in doing so.

This means a few fun things. You're very curious, you have a tendency to gossip, and you thrive on passion and joy.

This means the latter half of your '40s will be more powerful than the first five years. It means you'll also be inclined to explore new things and have fun. You also tend to involve yourself in other peoples' business.