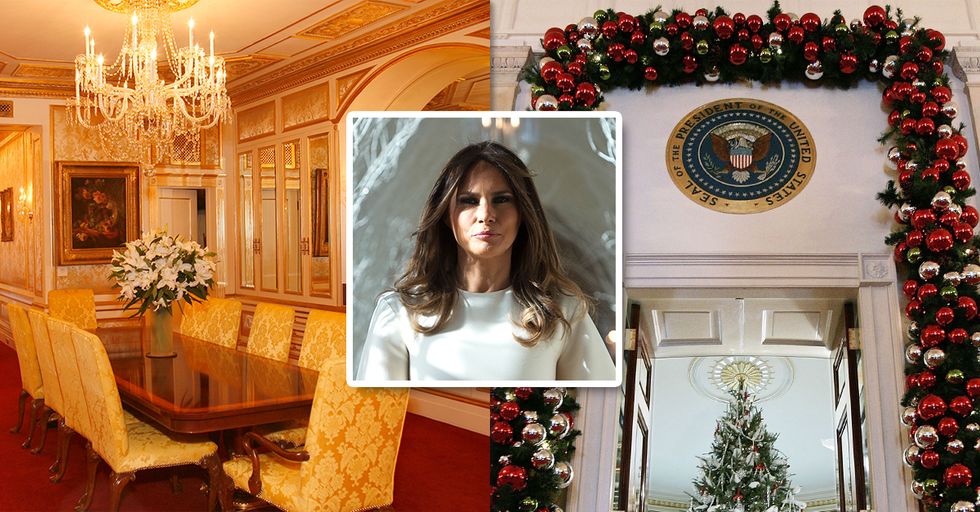 Here's What the White House Decorations Look Like Under Trump's Regime

Thanksgiving is done, and we all know what that means. It's time for Christmas decorations! Maybe you went out with your family over the weekend to cut down a tree. Maybe you even made some hot cocoa and sat by your fireplace and started watching It's a Wonderful Life. But no matter how you and your family celebrated the holidays this past week, we're pretty sure that it didn't come close to the way they're doing it at 1600 Pennsylvania Ave.

Earlier today, Melania Trump shared a peek inside the Christmas decorations at the White House, and all we can say is "Wow!"

It all started with the delivery of a gigantic — and we mean GIGANTIC — Christmas tree.

That happened last week. Every year since 1929, there has been an official White House Christmas tree. It's located in the Blue Room and is always a spectacular sight to see.

Every year since 1961, the Blue Room tree has had a theme. Jackie Kennedy started this tradition — such a trendsetter!

Jackie Kennedy's tree was Nutcracker-themed and decorated with angels, toys, and birds from Tchaikovsky's Nutcracker Suite. This year's theme has not yet been announced.

But the Blue Room tree isn't the only Christmas tree in the White House.

Far from it, in fact! It seems like there are more rooms with Christmas trees than without them! The first White House Christmas tree was brought in in 1889, during Benjamin Harrison's administration. It was placed in the second floor Yellow Oval room for Harrison's grandchildren.

There's also a hallway in the East Wing that's full of frosty branches.

And we have to say Melania looks pretty badass in front of those stark white branches. If you're looking for a place to shoot your next album cover, the East Wing of the White House is it.

Since the early 1970s, pastry chefs have created an elaborate gingerbread White House to add to the holiday decorations.

This year's gingerbread house is completely white (sensing a possible theme, here) and features a bunch of wreaths as well. It looks delicious (although we typically prefer a bit more candy). The holiday decorations don't end there...

This year, there are even ballerinas!

At least, there were when Melania was touring the Christmas decorations and this picture was taken. Maybe the ballerinas are a throwback to Jackie Kennedy's Nutcracker decorations?

(Let's hope it went better than her last visit with children.) Back in 1903, President and Mrs. Theodore Roosevelt held a Christmas carnival for 500 children! There was dinner, dancing, music, souvenirs, and Santa-shaped ice cream. Talk about a party!

This year's ornament honors FDR's administration. It's shaped vaguely like a tabletop radio, which many households used to listen to Roosevelt's Fireside Chats. It also features two flags with 48 stars each to show the number of states in the union during Roosevelt's four terms. The back of the ornament depicts Roosevelt's beloved dog Fala.

Recently, the official ornaments have each honored a different former president.

Lst year's honored President Herbert Hoover, who served as president from 1929 to 1933. The fire truck represents those that responded to a fire at the White House on Christmas Eve of 1929.

Here's an awesome video of Melania showing off this year's decorations:

It's enough to get even Scroogiest of us into the holiday spirit. And that's something we can certainly use after the year we've been having!