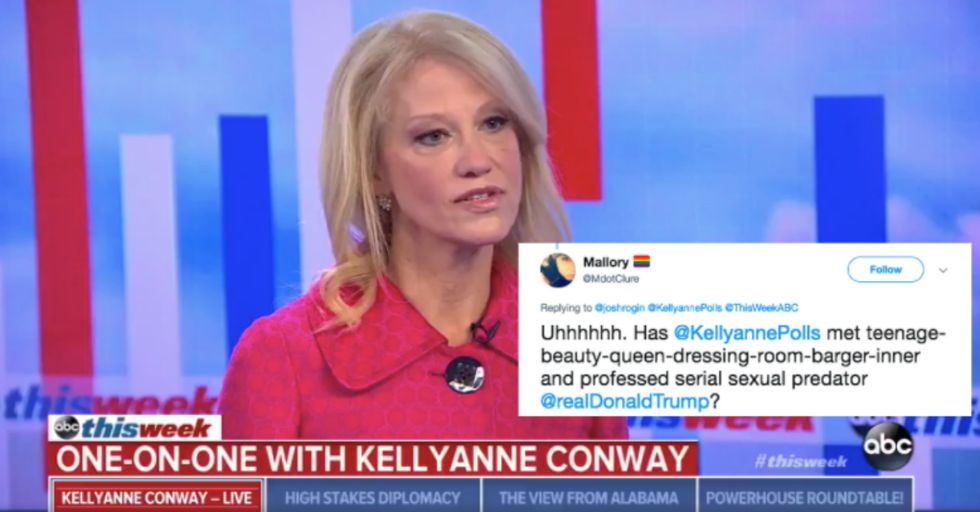 Here's Why Kellyanne Conway Just Called for Trump to ‘Step Aside’

Open mouth, insert foot. It's a move that Kellyanne Conway is all too familiar with. It seems that whenever the Counselor to the President isn't befriending squirrels or getting comfy on the Oval Office couch, she's working very hard to forget the many, many problems with her boss. On Sunday morning, Conway said something that made the rest of us think, "Hey, wait a minute..."

Roy Moore is the current Republican nominee for the U.S. Senate.

According to a report from The Washington Post, Moore was also engaged in a sexual relationship with a 14-year-old-girl when he was 32 years old. Obviously, people are not thrilled by this information. As it turns out, statutory rape isn't really at the top of the list of "Things Good Politicians Do."

Kellyanne Conway appeared on TV over the weekend to weigh in on the way that Moore has been treated in light of the allegations.

If you just heard a record scratch sound effect, it's because there is some hardcore cognitive dissonance going on in Kellyanne Conway's brain. Should we tell her? We should totally tell her, right?

He was caught on tape bragging about sexually assaulting women. He has bragged on Howard Stern's show about sexually harassing beauty pageant contestants. He is currently involved in at least one lawsuit with someone who claims Trump groped her. Conway saying that sexually assaulting women "should disqualify anyone from serving in public office" is akin to a Disneyland employee going on TV and saying, "Giant mice have no place in an amusement park."

How does she do it, folks?

It takes a special kind of obliviousness to condemn one man's heinous actions while supporting another's. You almost start to envy her ability to block everything bad from her memory, right? Almost.