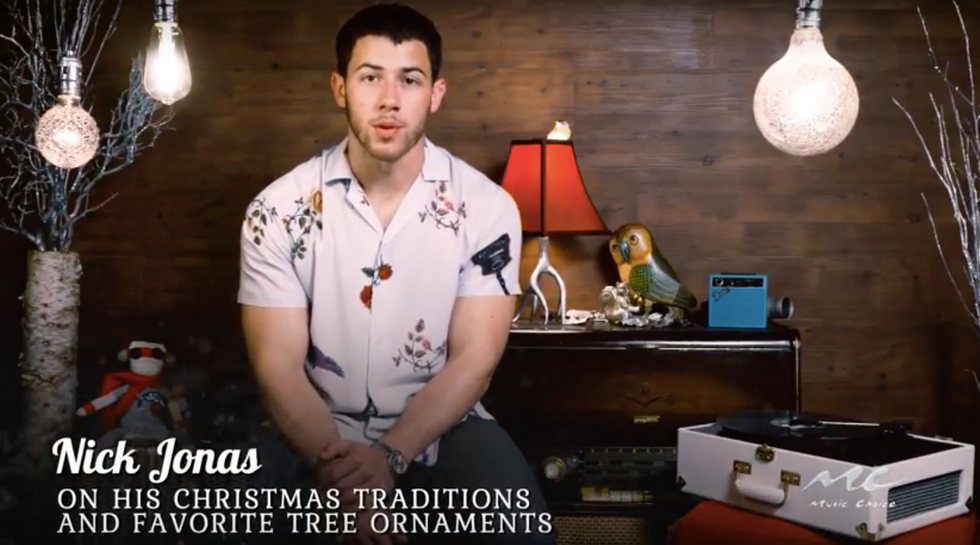 Singer Nick Jonas has been having a great past couple of weeks. He just performed at the 2017 American Music Awards, and, as  he told E! News, "I put out a Christmas song with Shania Twain — one of my all-time favorites."

In fact, Christmas has been on the Jonas Brother's mind lately.

Jonas is one of the featured artists on the "Sounds of the Seasons" Live TV series, which premieres November 20th on Demand.

The series, which features both performances and interviews, will have Kelly Clarkson, Niall Horan, Macklemore and Camila Cabello this year.

Each artist shared their holiday traditions and memories. Clarkson, for instance, is a holiday fanatic.

"We have fun with all the stuff like Elf on the Shelf and Santa, all the magical stuff," she said. "Our house is, like, crazy decorated. There’s usually a little snow village and we usually have a plethora of trees and they all have different themes." So fun!

Macklemore recalled the best gift he was ever given.

"My most vivid holiday memory would be receiving a Dallas Cowboys starter jacket in probably the early ‘90s," the rapper said. "I got that jacket and I remember it was probably three sizes too big, and it was one of the happiest moments of my entire life, of my childhood."

Jonas spoke about putting up the tree with his family.

"It was a big to-do and it took, like, hours because [my dad] would spend ten minutes talking about each ornament we hung on the tree," he said. But that wasn't the only thing he confessed...

Jonas said that he was "never given a lump of coal, thankfully." Because...

"I also never really believed in Santa Claus to be honest, so I wasn’t as easy to trick into thinking that it was real, you know, and [that] I would get the coal if I was bad." Someone call Krampus right now!