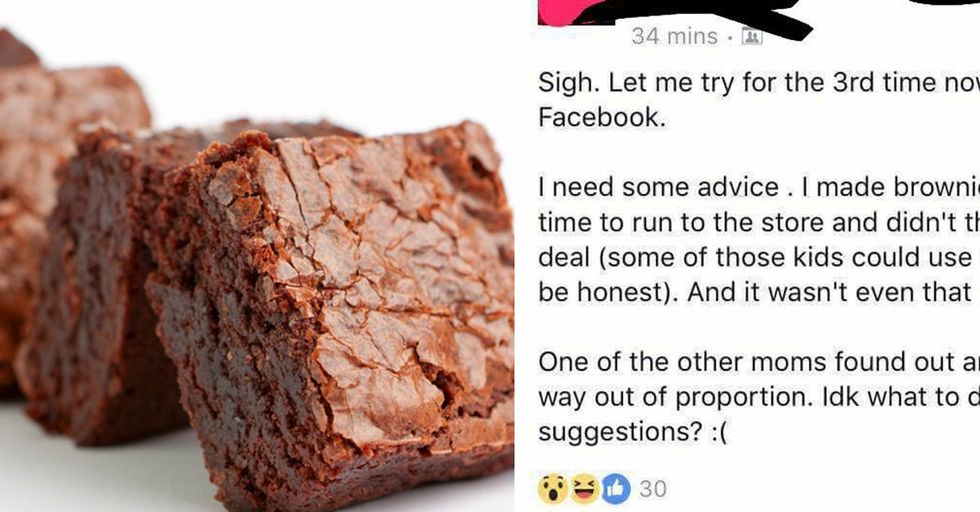 When you're the parent of school-age kids, fundraisers are just a part of life. Whether the playground needs equipment, the band needs uniforms, or the library needs to upgrade their collection of 1954 encyclopedias, you can bet there's a Fun Fair volunteer sign-up sheet or a wrapping paper order form in your future.

So it's not at all uncommon for you to need a little extra money.

We could all use some spare cash.

When that happens, it's time to organize a fundraiser.

There are a million different fundraising concepts out their, some more effective than others.

One of the most well known fundraising efforts schools employ is the bake sale, where parents bring in sweet treats to sell and the school keeps the proceeds.

Generally these treats are homemade...unless you're me, and then they're generally Twinkies that I unwrapped and put on a plate. That sort of thing is frowned upon in most circles though because, as delicious as Twinkies are, they can't hold a candle to Grandma's famous chocolate chip cookie recipe. And besides, I'm pretty sure there's something in the PTO bylaws that states it's "no fair" if Susie's mom gets away with cutting corners while Emma's mom spent fifteen hours whipping up gluten-free, organic, locally-sourced macarons and a life-sized cookie cake in the shape of the school mascot.

Pre-packaged Hostess cakes start looking pretty good, though, in comparison to the way too homemade brownies one mom brought to her kid's school bake sale.

A word of warning, and a hint:

This special ingredient is something most people have consumed in their lives, even if they don't remember it. Have you figured it out yet? Read on...

This mom, whose identity was mercifully blurred out before a screenshot of her now-viral Facebook post was shared on the Sanctimommy Facebook page, asked for advice about how to handle a fellow mom who had an issue with one of the ingredients she used in her brownies and was "blowing it way out of proportion."

Yes, you read that right. She used breastmilk. In the brownies. That she sold at her kid's school. "I didn't have time to run to the store and didn't think it was a big deal," the mom wrote, adding, "some of those kids could use the nutrition let's be honest." I know, it seems very much like she's trolling us, because really? And yet there are roughly eight billion breast milk recipes on Pinterest, so...maybe? Either way, Sanctimommy was plenty grossed out and wrote, "I shall forever remember today as the day I stopped supporting bake sales."

Over a thousand comments later, I think it's safe to say that people seem to agree.

I don't think expecting bake sale brownies to be boob juice free is asking too much, do you?

Yeah, maybe next time make your shortcut a box mix instead of some boob milk. Mostly though, much to the Internet's delight, people flooded the thread with some choice breastmilk jokes.

THE BROWNIES ARE MADE FROM PEOPLE! THEY'RE MADE FROM PEEEEEEEEOPLE! Sorry, Browniegate was just begging for a Soylent Green reference.

Another commenter pointed out that, if she's concerned about the children's nutrition, she really didn't go quite far enough.

Good point! What a slacker.

Other people totally understood this mom's perspective (but not really).

Jeez, some people are so sensitive.

Still others admired her resourcefulness (but again, not really).

Of course there were plenty of horrified people who saw this as no laughing matter.

It's safe to say that most people want to be informed if they're going to be consuming breast milk.

Nobody's going to argue that breastfeeding isn't great for a baby, but the CDC does caution that it's still a bodily fluid that can transmit serious infectious diseases as well as drugs or medications. Not to mention, ewwwwwwwwwwwwww. What do you think — harmless recipe substitution as long as "it wasn't even that much," or does the thought make you want to swear off chocolate (or at least bake sales) forever?

No judgment here of course, but it's probably best if we save our breast milk for babies - and consenting adults.