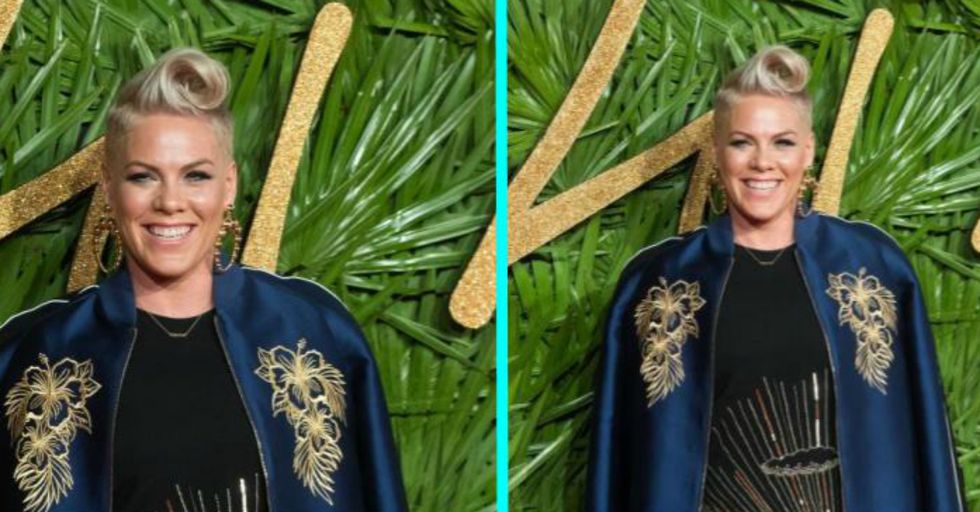 Here's Why P!nk's Intense Emotional Encounter With a Fan Left Them Both in Tears in the Grocery Store

It's easy to assume that life goes without any bumps in the road for celebrities. Sure, we know they're human but they're also rich! And famous! And on the covers of magazines and stuff.

But if they're a parent, they also deal with similar struggles any parent would deal with. Singer and superstar Pink is proving that fact by sharing a sweet story on her Twitter recently.

Pink tweeted on Wednesday about her emotional encounter with a fan.

"A really sweet Mama came up 2me tonight at the grocery store and told me some nice words about how she gets strength from my parenting cause I’m not afraid to fuck up in public. We cried together. It’s so hard. Y’all. I wish us mamas could give ourselves and each other a break," the singer tweeted.

The 38-year-old singer is mom to 6-year-old Willow and 1-year-old Jameson Moon.

Pink is never one to shy away from her "mom fails". It's no surprise then that fans and fellow moms can relate to the pop-star.

Pink even shared a "mom fail" of her own recently on Instagram.

She posted a picture of a letter that her daughter wrote to Santa Claus asking why the Elf on a Shelf hadn't moved in a few days! Whoops! That's definitely a situation we're sure several parents have found themselves in.

The note said “Santa, I am worried about Chippy, he has been in the same spot for 3 days. I don’t know why."

Oh no! Chippy! Pink posted the photo with the caption "MOM FAIL." We're sure the tendency is to appear calm and collected on social media, like you have it entirely together. But Pink posting this photo reminds us that everyone messes up and it's fine.

Despite a Christmas fiasco, Pink recently spoke about giving advice to her kids in a recent interview.

She told Cosmopolitan that her daughter was recently asking about boys and dating. Talk about an anxiety-inducing topic for a parent! This is surely not something any parent looks forward to. So how did she respond?

Pink took it all in good humor.

"She said to me the other day, ‘How many boys can I have at once?’ And I said, 'Excuse me?' I said, 'Probably none of them because they won’t deserve you,'" she told the magazine.

Even though her response was funny, she got pretty serious with her daughter.

Pink often shares photos of her kids on her social media accounts.

It's clear she loves being a mom and sharing the journey. It's also obvious that just because you're famous doesn't mean you don't hit the same hurdles any other parent may hit.

If you ask us, Pink seems like a pretty amazing mom.

Willow and Jameson Moon are two lucky little nuggets! Also, they're absolutely slaying the Christmas outfit game. Again, we know we've asked this already, but can Pink adopt us?

It's always refreshing when someone expresses vulnerability on social media.

Especially someone in the public eye. Everyone always wants to judge each other and everyone's parenting styles. Society doesn't make it any easier on moms...the pressure to be the "perfect parent" is enormous. But Pink's story and post reminds us that despite having totally different lives, sometimes we're all in it together. And it's okay to mess up, breathe, and know it's going to be okay.
20%

$79.99 $63.99
Buy Now
See More Deals
We hope you find these deals as awesome as we do! Just an FYI: we may receive a share of sales from links on this page