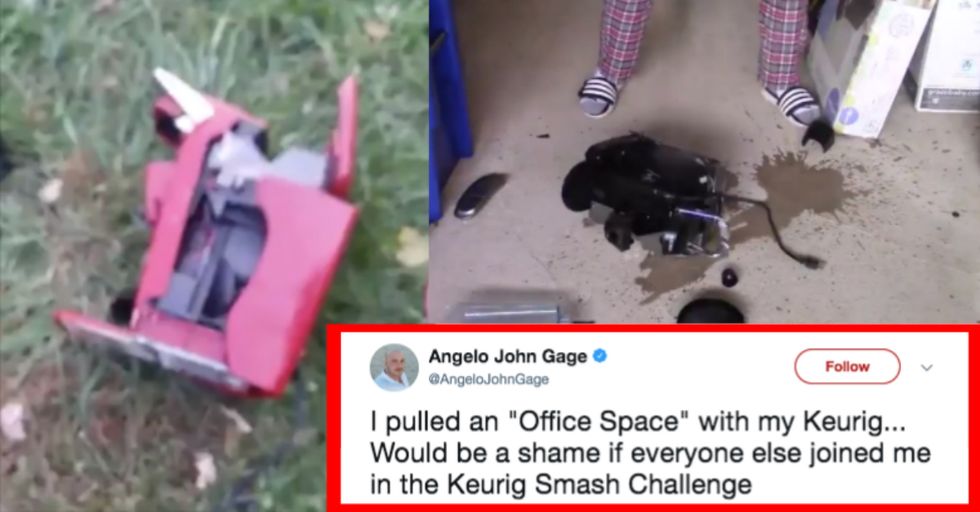 Here's Why Sean Hannity Fans Are Smashing Their Keurigs to Bits

Last week, The Washington Post reported that Roy Moore, the current Republican nominee in Alabama for the U.S. Senate, was engaged in a sexual relationship with a 14-year-old girl when he was 32 years old. The responses to that information have run the gamut. Alabama State Auditor Jim Ziegler even claimed that Moore's predatory behavior was akin to the relationship between Mary and Joseph in the Bible (yikes).

Sean Hannity's response to the scandal has drawn the ire of some individuals. Others, however, are smashing their coffeemakers to show their support for Hannity.

On Thursday, Hannity told his viewers not to rush to judge Roy Moore after the allegations made against him.

"Every single person in this country deserves the presumption of innocence," Hannity said. Many people thought Hannity's treatment of the situation was way too lax. The original Washington Post report was based on interviews with more than 30 people who knew Moore personally. What are the chances that all 30 of those people are lying, or that the Washington Post didn't follow up on the information they were given?

As a result of Hannity's treatment of Moore, several companies have decided to pull their ads from his show. One of those companies is Keurig.

@GoAngelo Angelo, thank you for your concern and for bringing this to our attention. We worked with our media partn… https://t.co/8bgMb1NFf7
— Keurig (@Keurig)1510422386.0

In fact, at least five companies have pulled their ads so far, including Realtor.com, 23 and Me, Eloquii, and Nature's Bounty. Keurig has not made a public statement explaining that Hannity's treatment of Moore is the reason they'll be pulling their ads, but their responses have been to people complaining about Hannity.

Sean Hannity's fans had a very mature and appropriate response to Keurig deciding to pull its ads from the show:

They started smashing their coffee machines. Today, the hashtag #BoycottKeurig is trending on Twitter.

Apparently, Hannity's fans are upset that Keurig has taken a "political stance" on the topic of men preying on teenage girls.

Honestly, we didn't even know it was possible to take a political stance on something like that. What does politics have to do with denouncing pedophilia?

This guy used a golf club:

Cool. Do these people realize that they've already purchased the Keurig machines they're destroying? That's not really how boycotts work. That's not how any of this works. Of course, there has also been a huge response from people who are against the #BoycottKeurig movement...

First of all, it's really hard to make the argument that you're on the right side of history when the company you're boycotting has spoken up against pedophilia.

Let's examine this more closely. Hannity defends child molester. Keurig pulls ads. People smash Keurigs. If you're having difficulty seeing the logic in this turn of events, it's because there is none.

Secondly, remember how Keurig cups are actually like, super bad for the environment?

Maybe destroying a Keurig machine (which again, you've already paid for) isn't exactly the worst thing one could do with their time. It's not like making a pot of coffee is difficult, and knowing that you can do so without supporting pedophiles is just the cherry on top!

To put it simply:

Keurigged, indeed. Now if you'll excuse us, we're going to make some coffee.