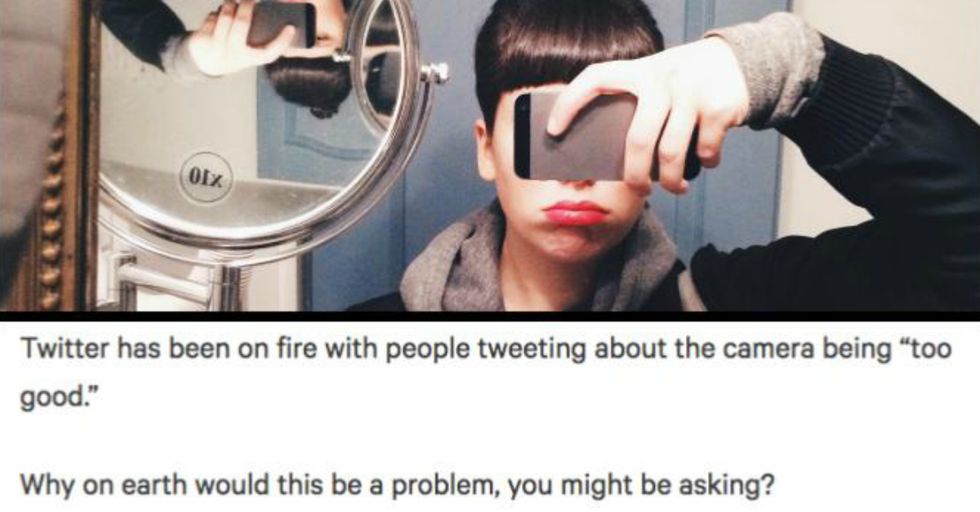 Here's Why Selfie-Lovers Are Hating the New iPhone X Camera

Since the release of the highly anticipated iPhone X, social media has been abuzz with reviews and comments, both positive and negative.

But the most surprising negative feedback has been about the camera. No, there aren't any problems with it.

Since Apple announced it in September, people from across the globe have been waiting in agony for their shiny new rectangles that would make all other phones look like ancient, useless garbage.

But the trendy, technology-obsessed masses didn't seem to mind that it was the "most breakable" iPhone ever, and that if you do crack the extremely fragile glass, you have buy a whole new phone instead of just replacing the broken part. Smart!

It's totally worth it when you find out it can do really creepy stuff like whatever this is.

This video is somehow both cute and unsettling at the same time. But there is one thing about the iPhone X that really has people talking (and not just out of a cartoon cat's head).

With a 12MP wide-angle and telephoto cameras (ƒ/1.8 aperture for wide-angle, ƒ/2.4 aperture for telephoto), optical zoom, and digital zoom up to 10x — just to name a few specs — the camera is one of the best available on a smartphone today.

But somehow, people are still able to find a problem with that.

Twitter has been on fire with people tweeting about the camera being "too good." Why on earth would this be a problem, you might be asking?

Because selfies are getting just a little bit too real.

People are being forced to see what their actual faces look like, and needless to say, they're not too happy about it. Considering we're living in an age when every Snapchat filter makes us look like baby Beyoncés, this isn't all that surprising.

This disappointed user claims that the camera makes him look "100x more ugly."

"I wouldn’t have much use for the iPhone X," said user Ben Odesza. "That camera is too good man all anyone would see is my dry ass skin and bags under my eyes in perfect HD quality."

Twitter user @lordnicolass used a bedraggled-looking SpongeBob to illustrate the sad state of his selfies with the new phone.

If this is really how your selfies are turning out, we might suggest investing in a better night's sleep instead of a phone that costs $999. Maybe get a new mattress? Or some nighttime herbal tea?

"iPhone X front camera is too good for my mug," said user @hufflepugs.

Oh come on, @hufflepugs. You look great in this selfie and you know it. Although, considering we can only see half of your face, there could be something very wrong going on offscreen...

Perhaps this phone will inspire all of us to take better care of our skin.

Some mild exfoliation and daily moisturizing can do wonders. Is a weekly face mask really that big of a commitment?

Poor @ivannotpablo is already convinced that his face was just not meant to be captured in HD.

But what he and every other iPhone camera complainer don't seem to realize is that your entire LIFE is in HD, and your real face is on display 24/7. Your super-stylized, perfectly posed selfies aren't fooling anyone, guys.