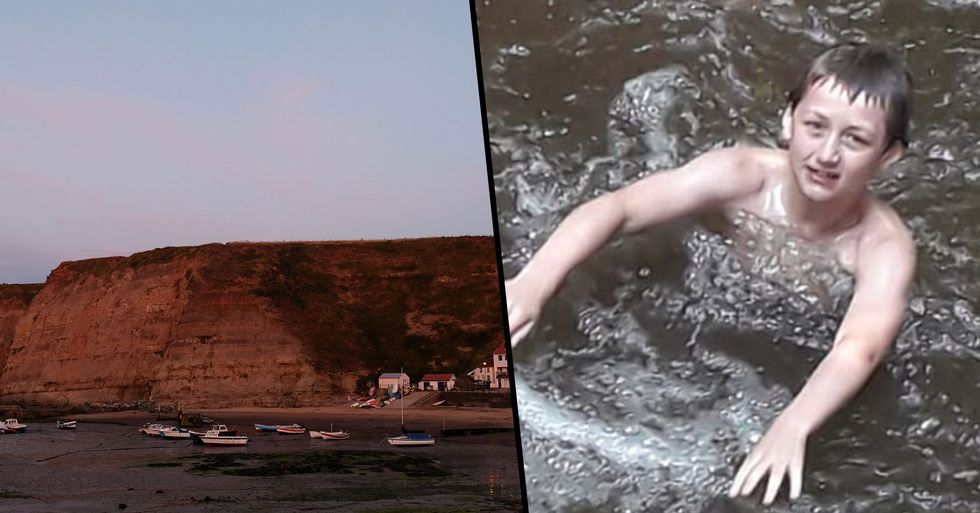 A schoolboy has been hailed a hero this week after he bravely and selflessly jumped off a pier to rescue a drowning toddler.

It's about time we had a little bit of good news, isn't it?

For the last couple of months, our headlines have been dominated with nothing but devastating news, mainly regarding the ongoing medical pandemic.

And, boy, are we ready for it to end.

We are quite simply sick of all this dreary and depressing news and are desperate for a good, old fashioned, feel-good story.

Well, you're in luck.

News has come in this week of the sheer bravery and selflessness of an eleven-year-old boy, and it is guaranteed to restore all of your faith in humanity.

Eli Harrison's bravery is next to non.

The schoolboy, pictured above with his parents, has gained viral fame after he sprang to action upon seeing a toddler struggling in the sea.

It happened in his home town of Staithes, in the United Kingdom.

Eli was walking along the pier with his family when they spotted something horrifying.

A toddler had fallen from the pier into the sea...

And was floating, completely motionless.

And, to make matters even worse...

The little boy was at a huge risk of being swept out to sea.

It is believed that the toddler had simply wandered off while his parents weren't looking...

And had somehow fallen from the edge of the pier into the waters below.

But, luckily, help was on its way.

Before his parents could react, Eli had jumped off the pier and into the sea.

Now, Eli has always been a confident swimmer.

His mom, Kayleigh Harrison, noted how the schoolboy is a strong swimmer with no fear of the water, and he has won certificates and awards for his skills in the pool in the past.

On his abilities, she said:

"Other kids are only used to swimming in a pool, but Eli can tell you about the currents and the tides."

But, all the same, his instant reaction was astonishing.

Kayleigh explained: "We'd gone down to the beach for the day and as we were walking along my husband saw the little boy in the water, but before he'd managed to take his bag off Eli had run and jumped off the pier into the water."

Eli had to swim around a number of small fishing boats in order to reach the drowning toddler...

Who, miraculously, was found clutching onto a fishing net.

Eli managed to get a firm hold of the youngster...

And slowly swam back to the shore with him in his arms.

On the rescue mission, his mom said:

"As he swam back, he had one arm around his tummy and you could see water coming out the bairn's [child's] mouth, it was bad."

However, despite the toddler being found floating in the water...

And despite the fact he had swallowed a lot of water, he made a full recovery.

The child's mother was understandably grateful to Eli for his heroic actions...

But Eli didn't do it for the money.

"He saved his life, it's mental. He just said he did what anyone else would have done, he doesn't realize how good it is," Kayleigh explained.

Following from his heroic rescue...

Eli now has future hopes of volunteering with a lifeboat crew.

The ocean can be a dangerous place...

And not everyone is so lucky when swept out to sea. Keep scrolling to see the harrowing Facebook Live video a struggling kayaker filmed moments before he drowned...