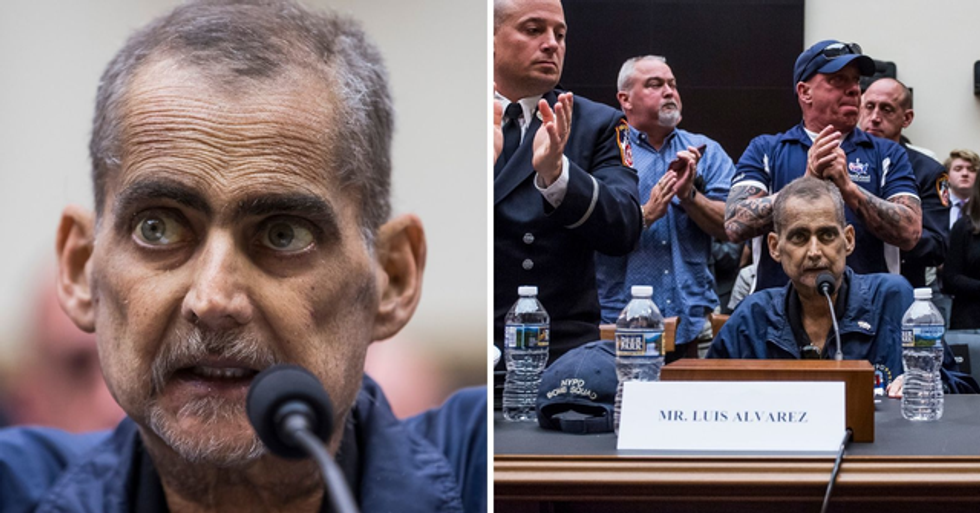 "Your indifference cost these men and women their most valuable commodity: Time."

These were the poignant words made by comedian, Jon Stewart, last month as he slammed Congress for their handling of the September 11th victim's fund.

Jon, who has campaigned tirelessly for the health care benefits for the emergency responders from the attacks, was accompanied by former NYPD detective, Luis Alvarez, when he made headlines last month with his damning speech to Congress.

Alvarez, who was suffering from an advanced-stage colorectal cancer diagnosis caused by the toxins breathed in at Ground Zero, has sadly passed away, aged only fifty-three. The retired cop spent his final weeks fighting for justice for himself and the thousands of other emergency workers affected by the attacks. The world has lost a true, American hero.

The 9/11 first responders have been cheated.

It is believed that up to 80,000 people - including police officers, firefighters, and emergency workers - rushed to the aid of the victims in the immediate aftermath of the 9/11 terror attacks in New York. However, those at the scene of the attacks breathed in pulverized dust that included many toxic elements, such as lead, concrete, asbestos, and other harmful chemicals after the towers collapsed.

Thousands have since passed away.

As of September 2018, more than 2,000 deaths were attributed to 9/11 related illnesses. And it is estimated that, by the end of this year, more people will have died from the toxic exposures breathed in at the aftermath than they did in the actual attacks.

First-responders have had to fight for their right to health care.

In the years following the attacks, a staggering number of first-responders started developing deadly illnesses such as cancers and respiratory diseases, all primarily caused by the toxic fumes and chemicals emitted from the burning wreckage.

A fund was set up by the government.

The 9/11 Victim Compensation Fund was set up to help the victims with the medical costs for their treatments. It was created in the months following the 2001 attacks and was initially active for two years, paying more than $7 billion to medical care for injuries and deaths caused by the 9/11 attacks.

But some responders didn't learn about their illnesses for another decade.

Congress and President Barack Obama agreed in 2010 to pay their medical costs, and subsequently reopened the fund, setting aside $2.7 billion to pay victims who were only just learning about chronic health problems resulting from their work in 2001. When that money proved to be too little, Congress added another $4.6 billion in funding in 2015.

However, the funds were slashed.

Many thought that the battle was won after The Zadroga Act from 2015 was passed to provide medical support for responders. However, this year, the US government cut the medical funding in half. Congress authorized $7.3 billion to cover claims through the end of 2020, but these funds have since been depleted across the 20,000 people enrolled in the program - meaning it is now in serious danger of running completely dry.

Congress has since been challenged over these funding cuts.

Comedian, and undeniable national treasure, Jon Stewart, has long advocated for the health care rights of the 9/11 first-responders, and made headlines this past month with his powerful and emotional speeches to Congress regarding the funds.

Stewart has always been vocal on his stance on the treatment of the 9/11 survivors.

Using his platform, The Daily Show, Jon was the man who made the health care issue a public one. On December 16th, 2010 during a Senate deadlock over a bill to provide health care and benefits for 9/11 emergency workers, Jon invited 4 of the first-responders onto his show. The following day, the bill was finally passed.

However, the battle didn't end there.

The support of the 9/11 victims has become Jon's life work. And, last month, he appeared in front of Congress with some of the first-responders to slam their funding cuts. Jon has been the voice for the thousands of men and women cheated out of their much-deserved health benefits, and has publicly questioned the government over the neglect of these heroes.

His speech made waves.

His emotional plea to Congress stirred up both emotion and disgust across the Nation. It brought up many unanswered questions: How have our heroes been neglected for this long? Why was Jon talking to a nearly-empty congress board? And, most importantly, why are there still people dying at the hands of our health-care system?

In June this year, Jon officially stood before Congress in a fight to replenish the fund.

And standing defiantly alongside Stewart was retired NYPD bomb disposal detective, Luis Alvarez. Alvarez spent a grueling 3 months at the scene of Ground Zero in the aftermath of the attacks and tirelessly sifted through the debris and rubble in the hunt for missing bodies and remains.

On Saturday, it was announced that Luis had peacefully passed away, surrounded by his family in a New York hospice, after 3 years battling the disease. He was only fifty-three years old.

The post read, "It is with peace and comfort, that the Alvarez family announce that Luis (Lou) Alvarez, our warrior, has gone home to our Good Lord in heaven today. Please remember his words, “Please take care of yourselves and each other". The tribute was accompanied by a photograph of Luis before he fell ill, which was a shocking comparison to the frail man we had seen sat before Congress just weeks earlier.

Luis dedicated his life to serving the public.

Alvarez served in the Marines and studied at the City University of New York, before joining NYPD in 1990. He was among a handful of the first officers at the scene of the 9/11 terror attacks, and has been recognized for police work excellence 5 times throughout his career. However, due to his deteriorating health, Luis was forced into early retirement in 2010.

Luis was diagnosed with advanced-stage colorectal cancer in 2016.

Doctors linked his diagnosis to the 3 months he spent in the devastating remains of Ground Zero. Yet, despite his deteriorating health, Luis still campaigned defiantly alongside Jon, and spent his final weeks standing in front of Congress to plea for adequate health care.

He selflessly used his last ever public appearance to appeal the replenishment of the 9/11 fund.

On June 11th, a frail Alvarez travelled to Washington to stand beside Jon in front of Congress. The father-of-three's emotional appeal granted him a standing ovation. He began his speech by telling Congress, "In less than twenty-four hours, I will begin my sixty-ninth round of chemotherapy... I should not be here with you. But you made me come."

He slammed Congress for their lack of action.

"I will not stand by and watch as my friends with cancer [from 9/11], like me are valued less than anybody else," he stated, "I'm going to make sure that you never forget to take care of the 9/11 responders."

He promised to fight until the very end.

And that he did. Writing in an emotional Facebook post the week after his visit to Washington, he announced that he had been moved into a hospice, but promised to continue fighting never-the-less. He also asked people to remember to take care of themselves and each other.

Luis left an impact on everyone who had the privilege of knowing him.

Including the NYPD. NYPD Commissioner James O'Neill tweeted a photo of Alvarez following his death on Saturday with the message: "His strength — physical, mental & emotional — led us all, & we vow to #NeverForget him or his legacy — which was, simply, to have others do what’s right."

And his legacy will live on.

His death has sent a poignant message to the federal government. Following the news of his passing, several lawmakers have stepped up and called on Congress to permanently allocate money to the fund in a bid to ensure this hero doesn't die in vain. Rest in peace, Luis.