This Dad Was Shot in the Las Vegas Attack, but That Didn’t Stop Him from Saving Lives | 22 Words 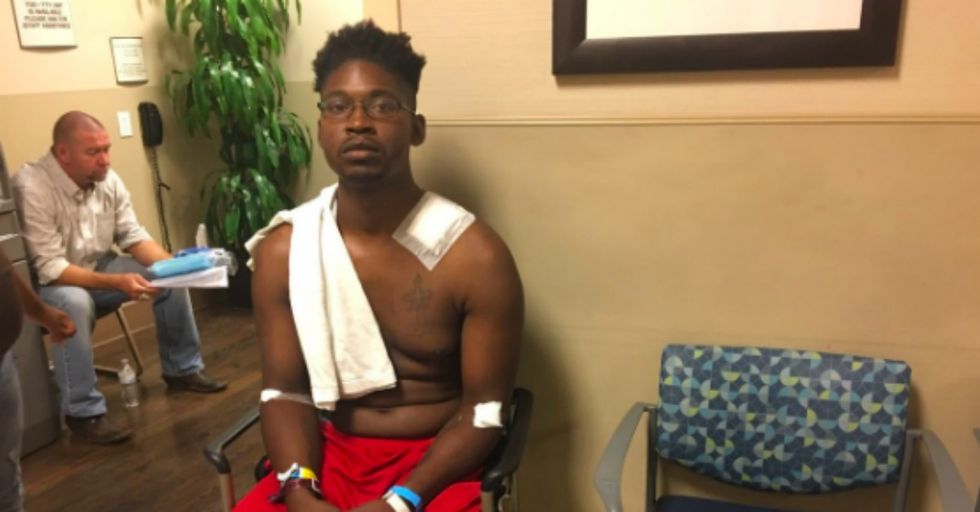 This Dad Was Shot in the Las Vegas Attack, but That Didn’t Stop Him from Saving Lives

In times of tragedy, it's easy to focus on the heartbreak.

A gunman opened fire on a crowd of concert-goers in Las Vegas on Sunday, October 1, killing 58 and injuring over 500 more. It's one of the deadliest mass shootings in U.S. history, a tragedy of unthinkable scope.

But as our country comes together in the days following the attack, stories of true heroes are emerging, stories like that of Jonathan Smith.

Jonathan Smith is a 30-year-old copy machine repairman and father of three.

He drove to Las Vegas with nine members of his extended family last weekend to celebrate his brother's birthday. They were all at Jason Aldean's concert when bullets started raining down.

Smith was focused on keeping his 22, 18, and 17-year-old nieces safe, but they got separated from him in the crowd. He turned back to look for them and saw a scene of chaos.

He started leading people away from the chaos and toward the airport. He noticed a few young girls who weren't totally hidden, and as he moved toward them to tell them to get on the ground, he was hit in the neck with a bullet. Smith has a fractured collarbone, a cracked rib, and a bruised lung. The doctors are leaving the bullet in his neck, worried that it might cause more damage if they attempt to move it.

Smith believes he was saved when an off-duty police officer tried to stop the bleeding and flagged down cars to get him a ride to the hospital. Later, he was reunited with the rest of his family, who made it to safety.

And Smith is a hero in is own right. The fact that he went back to save those in need is extraordinary. Since the photo of Smith was shared, his story has gone viral. Many on Twitter expressed that we should take care of heroes like Smith who sacrificed so much to help others in need.

While many see Smith as a hero, he doesn't see himself that way.

"I would want someone to do the same for me. No one deserves to lose a life coming to a country festival," he told The Washington Post. Nevertheless, Smith's sister-in-law Tiffany Jones set up a GoFundMe page to cover his medical expenses. "Our family is so blessed to have someone so heroic and selfless putting the lives of others before his own," she wrote. "Please, if you can, help and share the message." So far, the GoFundMe has far surpassed its $7,000 goal.