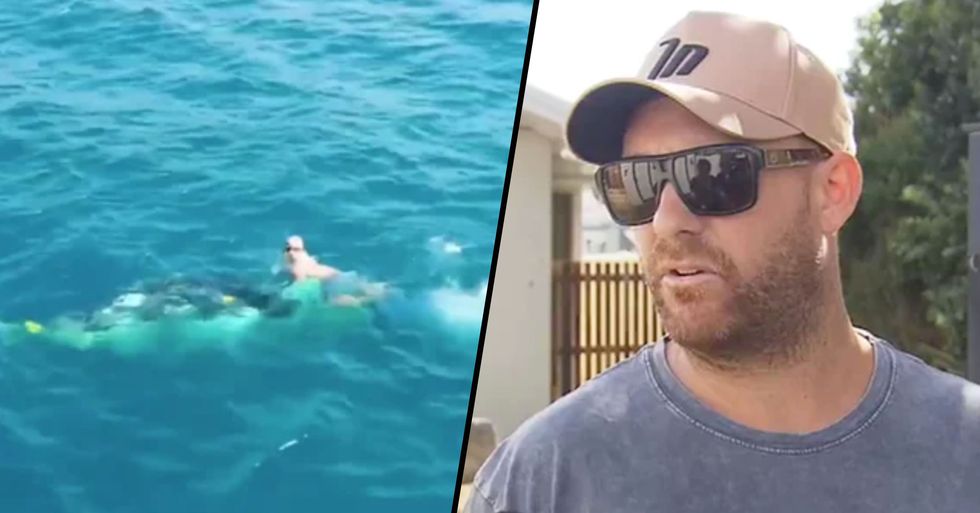 A heroic diver in Australia who saved a whale from a shark net is facing a huge fine.

Keep scrolling to learn more about this amazing yet injust story...

It's no secret that hundreds of thousands of whales are killed every year at the hands of us humans...

And this is a problem that doesn't seem to be getting resolved.

Over a thousand different species of whale are killed by humans every year.

Whether that is from whale hunting, pollution, or being caught in fishing nets... too many whales are being killed thanks to us.

It is truly devastating to see the numbers of these beautiful creatures fall further and further...

And even though many countries have now banned whaling, human threats sadly continue to exist.

There are many whale hotspots around the world...

And Australia is one of these places.

Australia is a country that is not only rich in wildlife...

But it is also rich in tourism.

Due to the vast amount of tourists who flock to Australian beaches every year...

Officials have had no choice but to act on the number of shark attacks that were taking place in their waters.

And while officials have claimed that this protects tourists from sharks, animal activists have stated otherwise.

Shark nets are responsible for thousands of sealife deaths every year.

According to the Sealife Trust, over 15,000 animals have been killed by these nets in New South Wales – this includes about 100 species such as endangered turtles, dolphins, dugongs, rays, seabirds, harmless sharks and rays.

There are eco-friendly ways to keep sharks away from the shores...

But the use of shark nets is much more cost-affective... which, let's face it, is the only thing that matters in the eyes of those in power.

This government attitude has been demonstrated even more recently through the story of a Queensland hero...

Django is a diver from Australia's Gold Coast and he was recently out on his boat in the local waters.

Django spotted a whale close to the surface of the water...

He noticed that the whale, which was later identified as a humpback calf, wasn't moving which made him get closer to investigate.

It didn't take long for the diver to realize the young whale was caught in a shark net.

He couldn't wait for the authorities and he decided to act upon his instinct, so with his adrenaline pumping, he decided to do something about it.

Django jumped into the water and swam to the whale's aid.

He used his knife to free the whale calf's pectoral fin from the net, which was cutting into its flesh.

"He was about eight to nine meters deep. Because of the adrenalin, my heart was just pumping," Django explained, describing his repeated resurfacing.

Within seconds, Django had cut the poor whale free and it began to swim away...

And thankfully, the heroic diver made it back to his boat in one piece.

Django has since become a social media sensation...

@0DanSmith Love how he pumps the air as the whale swims off. What a rockstar! When are we finally going to get rid of those nets?
— Antifa Pete (@Antifa Pete)1589871639.0

And locals have been praising the diver for his selfless and heroic actions.

However, it seems that the Gold Coast authorities aren't sharing this enthusiasm.

In Australia, it’s illegal to come within 20 meters of shark control equipment or a live whale.

Queensland Fisheries said to local media that an infringement notice has not yet been issued, but is instead pending an investigation. Naturally, people have been left outraged over the fact that Django is being fined for saving an animal's life.

So much so, that supporters have set up a GoFundMe account to help Django pay should he be fined.

Watch the incredible footage of Django in action here...

And we sincerely hope that the charges against Django are soon dropped completely. Make sure to keep scrolling to read about the most recent moves made in boycotting SeaWorld...