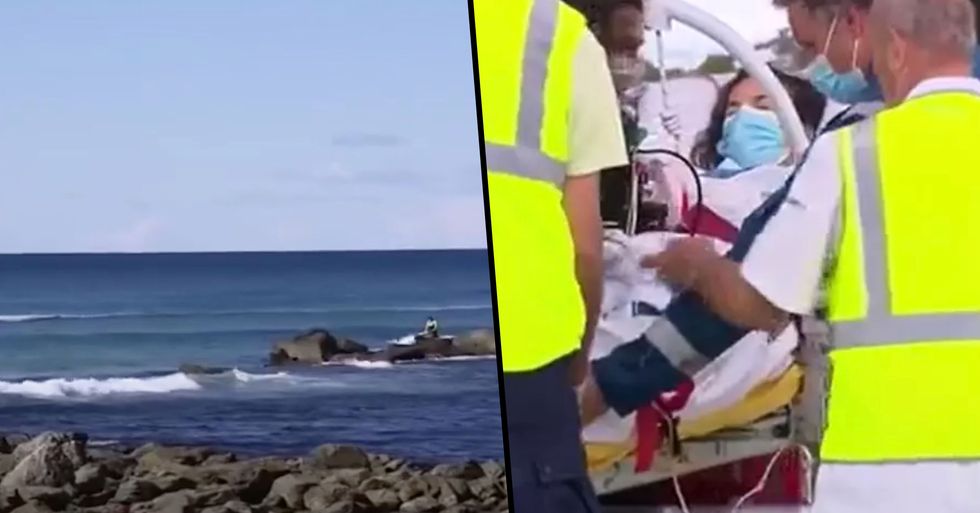 A heroic Aussie surfer recently saved his wife's life after she was mauled by a great white shark.

Now this is a true story of bravery and heroism...

The country's hot climate, tropical wildlife, and gorgeous beaches are enough to entice anyone!

The thought of living alongside the beachfront is truly desirable...

But the reality of these Aussie beaches are certainly not as enticing as they seem.

And the reason why?

Australia is the home to many different species of shark...

Including the most notorious one - the great white shark.

Great white sharks have had a bad name for years now.

Ever since the release of the 1975 movie Jaws, these species of sharks have been regarded as blood-thirsty killing machines who will destroy anything in their paths.

But this isn't at all the case.

Whilst great white sharks are one of the most dangerous predators in the ocean, they are known to actually keep their distance from us humans and we aren't at all a part of their diet.

And if this incredible photograph doesn't prove that these sharks aren't as vicious as they have been portrayed to be...

We don't know what will!

They are truly beautiful creatures...

But it's important to remember that they are wild animals at the end of the day, and they can be extremely unpredictable.

Shark attacks are perhaps the most common in Australia...

And this is because Australians just love the water. According to statistics, Australia has the world's highest diversity of sharks in its waters that are visited regularly by eighty-five percent of the population.

Surfers are at the highest risk of being attacked by a shark...

And this is because their surfboards resemble a shark's key prey - seals!

A surfer was recently attacked by a shark in Australia...

And her husband has made headlines for his heroic actions to save her life.

Chantelle Doyle, who is thirty-five, went out surfing on the morning of the 15th of August off Shelly Beach at Port Macquarie, New South Wales.

She was out on her surfboard at around 9.30 am when she was unexpectedly approached by a shark, which was assumed to be a great white.

This is when things took a turn for the worst.

According to reports, the shark attacked her right calf as well as the back of her thigh.

Surfers along the beach recalled hearing a "piercing scream"...

And luckily for Chantelle, her husband Mark was nearby who immediately rushed into the ocean to his wife's aid.

And the Aussie reportedly "punched" the shark in the head and jumped on its back until it released its grip from his wife's leg.

Chantelle was then carried back to the shore by her heroic husband.

Fellow surfers recalled how the injured woman remained extremely calm, but her leg soon started to become numb which lead to her being airlifted to the local hospital.

"The bystanders on scene that rendered assistance should be commended. They did an amazing job," he said.

And as for her husband?

Witness Jed Toohey told The Daily Telegraph, "He saved her life...it would have been strong enough to take her out to sea. He was really incredible."

Mark spoke about the incident himself shortly afterward...

"You see the mother of your child, your support, your everything, who you are... and you just react!" he said to ITV News, fighting back tears. "You start amazingly thinking where to punch [the shark] so you just think... the eye! It feels like you're punching a brick wall."

This is an example of a true hero...

And we wish Chantelle a speedy recovery from this terrifying ordeal. Keep on reading to learn about the great white shark that was caught soaring fifteen feet through the air...