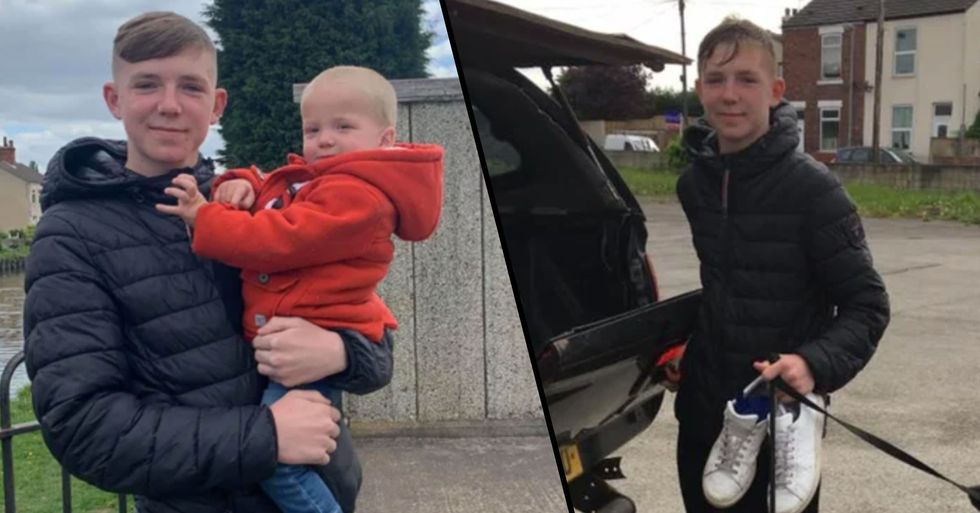 Hero Teen Dives Into Water to Save Drowning Toddler

A teenage boy has been hailed as a hero after he selflessly dived into freezing cold waters to save a drowning toddler.

It is a truly remarkable story, and the toddler's mom now has a heartwarming message for the heroic teen...

In today's current climate, a bit of happy news has never been so important.

For the last couple of months, our headlines have been dominated with nothing but devastating news regarding the ongoing medical pandemic.

And, boy, are we ready for it to end.

We are quite simply sick of all this dreary and depressing news and are desperate for a good, old fashioned, feel-good story.

Well, you're in luck.

News has come in this week of the sheer bravery and selflessness of a teenage boy, and it is guaranteed to restore all of your faith in humanity.

Now, teenagers aren't always portrayed in the most positive of lights.

For decades now, stories of the unruly and rebellious behavior of some teens have given the whole age group a rather negative stigma.

The typical teenage boy stereotype isn't always a good one.

Lazy, arrogant, reclusive... Yeah, we all know a teen like this.

But many people, particularly those of an older age, can be intimidated by this particular age group...

And are quick to jump to the assumption that all teens loiter in alleyways, terrorize the elderly, and generally just get up to no good.

But this is only an assumption.

There are plenty of teenagers out there who go against everything about these stereotypes...

But, sadly, they just don't get enough recognition.

But now, one teenager has made the headlines...

And he has spectacularly shut down all these negative stereotypes.

Ryley Ferguson has been hailed as a hero.

The fifteen-year-old, pictured in the center above, has recently gained headline fame after he did something remarkably heroic.

Ryley, from West Yorkshire in the United Kingdom, was out walking his two dogs this week when he spotted something alarming.

He witnessed a toddler fall into the waterway and become submerged by the water.

The toddler in question was Reggie Hampton.

His mom, Rebecca Hampton, had taken her eyes off her son while she was gardening, thus giving him the opportunity to wander off towards the canal.

She says that Reggie is a very "adventurous" child...

And is always exploring at any given opportunity.

But, luckily, Ryley was there to witness Reggie's latest venture...

And he didn't hesitate with springing to action. The teen quickly ditched his jacket, kicked off his shoes, and dived into the canal as the toddler disappeared under the water.

On the incident, an emotional Rebecca said: "A neighbor had rushed into our house and said Reggie was in the canal. The world stopped for me at that moment, I was in complete shock. I started shouting for him, it must have been a couple of minutes at most but it felt like an eternity."

"I can’t tell you the relief I felt when I saw my beautiful boy. I can’t thank Ryley enough, I gave him a card with some money but no money in the world will ever cover what he’s done for me."

She couldn't be more grateful for the teen's heroic actions.

"I keep saying Ryley is our guardian angel, he saved my boy and saved my life. Reggie will grow up knowing who Ryley is and what he’s done. He’s our superhero."

News of Ryley's heroics was quick to spread around the community...

And a local resident, Susan Dann, shared this photo of the teenager shortly after the incident, fully clothed and dripping wet, but evidently pleased with the outcome. When asked on why he did what he did, he responded: "I didn’t have time to think. It was pure instinct at that point. It all happened in a split second and suddenly I was at the bottom of the canal and managed to grab him. If I wasn’t there, if I walked by just thirty seconds later, he could have died. I had to save him."

And, since the accident, Ryley and Reggie have been reunited.

Rebecca has also launched a campaign for Ryley to be given a Pride of Britain award for saving her son. She explained, "My daughter’s 4-years-old and she’s been saying that he’s like Superman. She’s been asking 'Did he dive into the water like Superman?'"

"Reggie will always know who his hero is and we will forever be in your debt."

Ryley, you're a true hero. For more on unlikely heroes, keep reading to find out about the remarkable dog who saved 6 people trapped under a collapsed building...