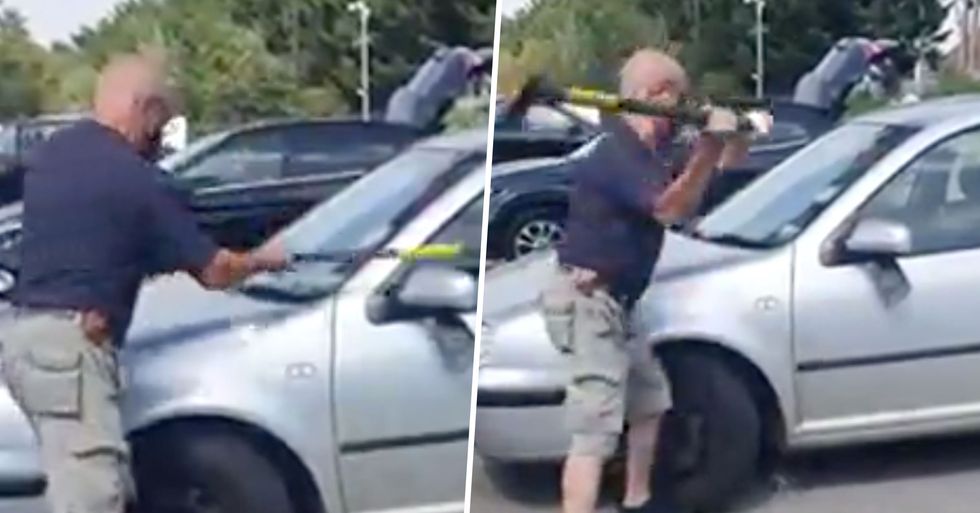 The "hero" that saved a dying dog by taking an axe to a car window has gone viral on social media after Facebook users continue to praise the man for his actions.

And he has the most wholesome response...

Dogs really are the only things making 2020 a better place.

So just imagine how a dog would feel being trapped inside one for a prolonged period of time.

And how distressed the animals can become.

Luckily, most people know not to leave their pets in their vehicles on hot days...

But, sadly, there are still pet owners out there who insist on locking their animals in scorching hot cars.

The most recent incident happened in the U.K.

August 10th was one of the country's hottest days of the year, where temperatures soared to ninety-three degrees Fahrenheit. However, despite the heat, Samantha Heaver, a passerby, noticed a Yorkshire Terrier trapped inside a parked car.

The small dog was visibly in distress...

And was panting as it sat motionless in the baking car.

Luckily, the good samaritans decided to rescue the helpless pooch.

The police were called over and a member of the public, who has since been hailed as a hero, approached with a sledgehammer, ready to smash the windows.

And had to hit the window several times before he could break-in.

And the little dog was able to be retrieved.

At first, the dog seemed reluctant to leave the car...

And was visibly subdued and drowsy.

Once he was taken out of the car, he was given plenty of water...

And subsequently checked over by the vets, where it was deemed he would have no lasting injuries.

The owner returned ten minutes after the break-in...

And, unbelievably, was only "given advice" by the police officers, according to a Thames Valley Police spokesperson.

The footage shortly went viral with social media users praising the "hero" for acting so fast.

Morris was on his way to the retail park while waiting to be seen by a doctor at a nearby A&E.

He initially called emergency services, but while waiting decided to "take the law into my own hands" as he didn't want to wait.

Morris said: "The little Yorkshire Terrier was very distressed. It was on its side and was heavily panting - it was leaning up against the window." "It was like it had become lifeless - its eyes were closed - it looked completely exhausted." "The dog was minutes away from dying and I just thought 'I need to do something here.'"

When the owner returned Morris reported that she was more shocked than anything. Saying: "I don't know what I'm thinking."

"I managed to break the window after eight attempts because I couldn't get a good grip on it," he recalled, adding that two police community support officers nearby came over to the car before taking the dog to a vet for treatment." "The police took all of my details but at no point did they charge me or caution me for a criminal offense or even say what I did was wrong," Morris continued. "As someone who is ex-military, I am very focused. And at that moment I knew that if I didn't act then the dog was going to die."

Morris said he had no regrets and would do it again.

"The dog should have been groomed as well, he was absolutely boiling. If I was in the same situation tomorrow I would do exactly the same thing. I don't regret it." "People are saying that they want to buy me a pint [beer], I'd much rather that they donated to Battersea Dog's home or a dog's charity instead."

You can watch the dramatic rescue mission here.

For more on the idiocy of some pet owners, keep scrolling...