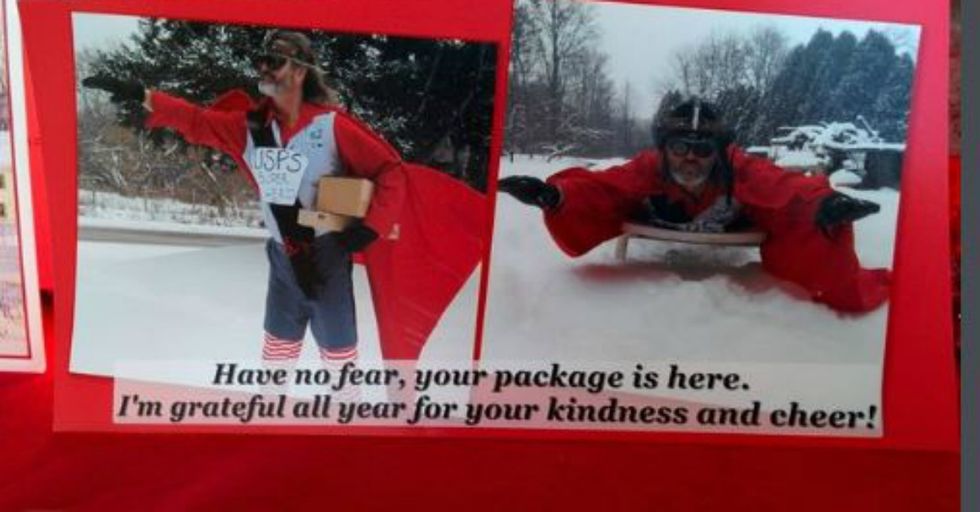 Package delivery drivers, mail carriers, and heck, even pizza delivery drivers probably experience some of the worst of the worst when it comes to doing their job. They have to deal with horrible weather, rude customers, bad drivers, barking dogs, slippery sidewalks, and, in the most extreme of cases, even angry wildlife. Can you say that much about your own job? I sure can't!

So the few that go the extra mile to make sure your package is safely delivered or that your day gets just a little bit brighter are true diamonds in the rough. The following 30 examples show delivery superheroes living the United States Postal Service creed every day: Neither snow nor rain nor heat nor gloom of night stays these couriers from the swift completion of their appointed rounds.

And some of them look darn good doing it. Seriously. Carlos the Mailman can deliver my package any day.

Kudos to this guy for following instructions to the letter, even if it meant making your front porch look ridiculous as a result. I wish my delivery driver had this good of a sense of humor.

Someone give this person a raise and 5 extra vacation days, STAT! I probably wouldn't even do this for my own package, let alone someone else's.

Sure, this guy totally missed the point of the "photo" feature, but can you really be bad at him? I'd probably start ordering more packages just so I could receive these hilarious pics.

Seemingly small acts of kindness like this one can mean the world to someone else. We need more of these kinds of stories! And no, I'm not crying...there's just something in my eye...

This guy truly is the best Amazon guy out there. I would have appreciated this quick thinking when my last three packages were stolen off my front porch in broad daylight...

It must have been tough to give this adorable guy up once his owners were found. Who wouldn't want a furry sidekick while you're out on the job?

I don't know what it is about this postal worker that makes all the turkey in the neighborhood flock to him, but he must be doing something right.

This just melts my cold, bitter heard. Seriously, though, you probably shouldn't listen to anything Ollie has to say when it comes to medical matters. He's clearly just in it for the treats.

This epic mode of transport

Am I seriously crying AGAIN?! I didn't think an article about delivery drivers would be such an emotional roller coaster, but what do I know?

I see a future in home decorating in this delivery driver's future. Taking this package off the couch would ruin the whole decor scheme, so hopefully, this person just made the sacrifice and left it there.

Wait, there's no box to check for "bear" on this form? In Canada? This seems like it would be a fairly common occurrence.

Delivering mail for a living can probably be a pretty brutal job, so it's pretty refreshing to see a mailman truly enjoying his chosen profession. This guy probably cashes in big time around the holidays.

It takes a big man to swallow his pride and forgive a betrayal such as this. Hopefully, Alfie now realizes the error of his ways and was able to make peace with his gracious mail carrier.

Talk about going above and beyond! A package thief would have to be a straight-up ninja to steal this sucker, and at that point they pretty much earned it.

How hilarious is this FedEx driver's unimpressed expression? You're not fooling anybody, Barbara!

Can someone give this little guy a peanut, already?! Look at how patiently he's waiting for one! If this new mailman doesn't keep the squirrel-feeding tradition of his predecessor going, I'll be extremely upset.

These rabbits would have been roadkill if it hadn't been for this brave and thoughtful postman. It's fitting that you deliver Royal Mail, Bob because you truly are a king among men.

How is this man not an international celebrity yet?! Is there anyone on earth that would say "no" to binge-watching a reality show starring Carlos the Mailman? I think not.

Instead of just eating his Whopper in peace, this UPS worker offered to give this customer another chance to grab his package during what was obviously his break time. If that's not going above and beyond, I don't know what is.

This "Cast Away" reference

At first, I thought to myself, "Wilson? Why Wilson?" And then I remembered what Tom Hank's character did for a living in Cast Away, and it all made sense.

Just looking at this photo soothes my soul. After all, delivering packages is pretty much one giant game of Jenga.

The only thing better than this note would have been if the delivery driver had attached a photo of this adorable scene. But yeah, messing with a mama raccoon and her babies would have been a mistake, no matter how important that package was.

My guess is that this package carrier was mainly trying to hide the item behind this pillar but then threw some branches on top for good measure. Not super effective, but I appreciate the effort nonetheless.

We've all been there, Dave. But this pizza delivery person doesn't get paid enough to have to see you hungover and in your underwear, Dave.

Mail carriers, take note. This suit, tie and hat combo alone makes me want to give this man all of my money. If you want to get extra gifts this holiday season, it's time to step up your game.

This brilliant use of bush

Sometimes, you have to improvise in order to get the job done. And sometimes that involves shoving a package into a push for safe keeping.

I don't care if it violets every single FDA regulation, I want all of my pizza delivered by this exact dog. HE HAS HIS OWN PIZZA HUT VISOR. THIS IS NOT A DRILL.

Sometimes, all you need is a little bit of positivity in the last place you'd expect it. Thank you, Joey the Amazon Driver, for reminding us all to appreciate the little things in life. I'll try to remember that the next time I watch my Amazon Driver stand on the sidewalk and literally throw my package onto my front porch, regardless of whether it's marked "fragile" or not.