Heroic Man Saves 1,000 Dogs From Being Slaughtered For Food | 22 Words 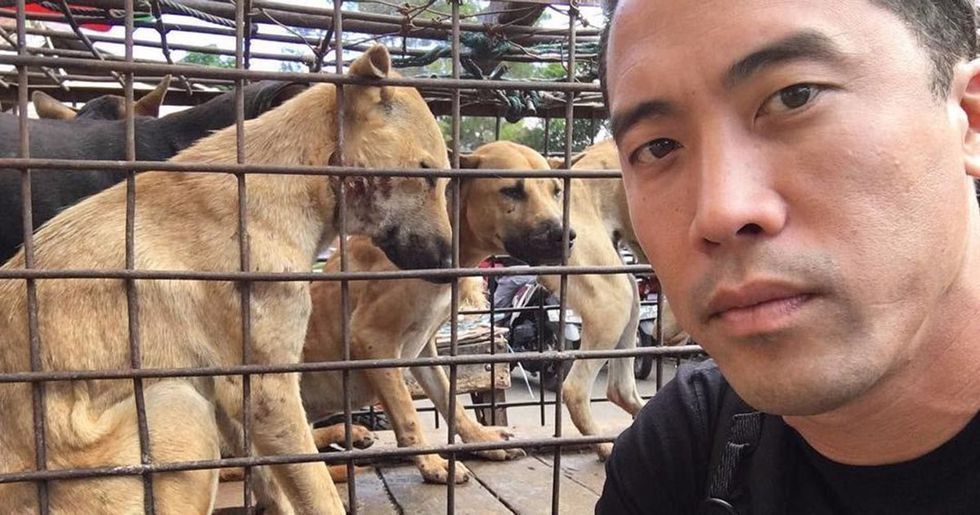 Heroic Man Saves 1,000 Dogs From Being Slaughtered For Food

Sometimes we get so used to seeing atrocities take place that it never occurs to us that we can make a difference. One man remembered. In China, an animal rights activist risked his safety and freedom to ensure that 1,000 innocent dogs and cats were spared from inhumane conditions and eventual slaughter for food.

Every year, the city of Yulin in China holds a dog meat festival that's already claimed the lives of thousands of animals.

They're painfully kept in small cages and are killed in painful, inhumane ways. The public has started to turn against the festival, but it continues with dogs transported in conditions like you see above.

Activist Marc Ching had been working to stop the festival, but it carried on.

So he tried a less diplomatic approach, basically hijacking a truck carrying a staggering 1,000 dogs in cramped spaces and cages like you see here.

They're kept that way until they're slaughtered or die from the conditions or starvation.

Essentially their lives were over when they were rounded up, but Marc did an extraordinary thing.

He approached the complicit driver and asked to be shown the health certificates for each dog, as there should be.

He knew the driver wouldn't have them because these dogs were all either stolen or stray. The driver tried to evade Marc, but Marc persisted in bringing order to this travesty.

As the vehicle was stopped, passersby saw the reality of the situation.

Helpless animals were piled atop one another, starving and sick. People took notice quickly and joined Marc's effort to stop this truck.

In not time at all, 100 cars and 300 people joined Marc thanks to social media.

It finally felt like a change might happen for these unlucky pups. The crowd grew angry at their treatment.

Doing what they could, bystanders started feeding the dogs.

After a ten-hour showdown, the dogs were finally freed. It was a tremendous victory for animal rights activists and, of course, the animals.

Equally important, the showdown brought global attention to this event and its cruelty.

Since then, even more pressure has been placed on businesses and officials to stop the festival as it exists.

This was the biggest load of dogs police had ever seen, but there are countless more trucks and many more slaughterhouses.

It's a tragedy for any dog or animal lover. There's no regulation or humanity in the trade. Many are ignored and starved until they're cooked or sold for pennies.

Now, thanks to Marc's bravery, these animals are being cared for by vets, fed, and adopted.

Many believe this load of dogs turned into the largest adopted batch of dogs in Chinese history. These dogs got a happy ending, but many others don't, so hopefully the public pressure against the Dog Meat Festival will continue to grow.