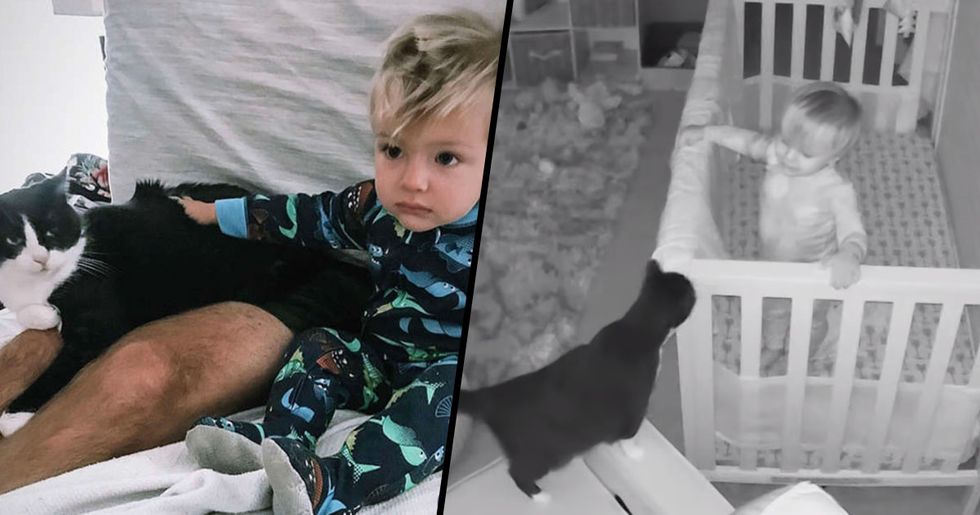 Hidden Camera Captures Cat and Baby Having the Cutest Conversation

The relationship that we have with our beloved pets never fails to amaze.

Pets aren't just animals, they are a part of the family.

So when it comes to welcoming a new baby into the family circle, some pets don't take to this change all that well.

But one family found that their new baby struck up an unexpected friendship with their cat, Zora, and the pair would even have conversations with each other.

A family really isn't complete without a pet.

The most popular household pets are the trusty dog and cat, and they truly make a wonderful addition to any family.

Dogs and cats are loved for their placid and affectionate natures.

And cats, in particular, are relatively easy to keep in a household.

It turns out that cats are rather popular ...

It is estimated that currently, 95.6 million cats are living in households here in the United States.

And there's a reason they're so popular...

Despite dogs currently holding the title of the most popular pet, the household cat is equally as affectionate and lovable.

It's time to ignore the "cats are evil" stereotype...

Because, in fact, cats are beautiful and adoring animals.

Zora the cat is here to prove this very matter.

Lindsey Needham and her husband are Zora's owners, and they recently had a baby together, Brody.

It's always risky introducing a baby into a family of pets...

Some pets, especially dogs, don't take well to the new addition and there have been rare cases when babies have been physically harmed by jealous pets.

This certainly wasn't the case for the Needham family.

"The first time Zora met Brody, I was holding him in my arms after we got home from the hospital and she jumped up on the chair and started sniffing Brody’s head," Lindsey told The Dodo, “She was purring immediately."

And by the time they knew it, the pair were best friends!

The two friends have never needed words to communicate, they simply just understand each other...

“She has always been so patient with him and never showed aggression toward him," Needham said, “It’s almost like she understood that Brody was a baby, learning the world around him."

But recently, Brody and Zora have become more talkative...

Lindsey and her husband were watching TV one evening after they had put Brody to bed when they heard a lot of meowing coming from upstairs. Luckily, they had a baby monitor cam set up in Brody's room.

Zora had broken into Brody's room.

Lindsey and her husband observed on the baby monitor cam app that Zora was perched on the armchair next to Brody's crib, and was curiously looking to the infant for attention.

It appears the pair were having their own little conversation...

“We open the baby monitor app on our phone and, sure enough, we see Zora sitting on the chair meowing next to the crib and Brody is standing up meowing right back at her, looking like they were having an actual conversation," Lindsey said in disbelief.

Zora and Brody are transfixed by each other.

"My husband and I couldn't help but just watch and laugh hysterically," she went on to say.

Loving the feline content? Keep scrolling to learn about the cat who was put into solitary confinement at the shelter where he was staying...