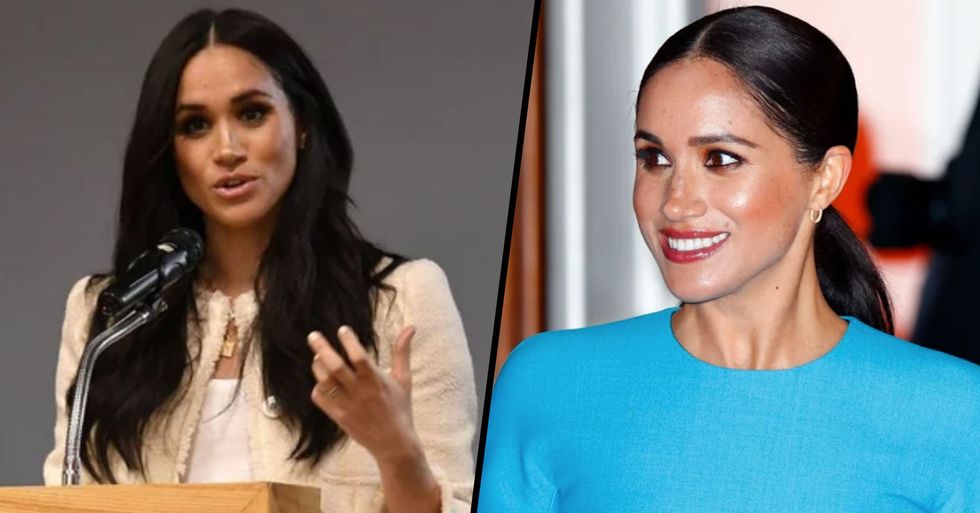 Meghan Markle's most recent public appearance has not gone without comment. But her jewelry seems to be saying everything she can't...

Yeah - Meghan is one inspiring woman.

And she clearly has excellent taste.

And some pretty stunning photos emerged, with Meghan radiating with happiness.

And some eagle-eyed fans noticed something.

It looked almost as though Meghan was sending a subtle message with her jewelry ...

Each piece seemed to have a specific hidden message.

Did Meghan do this on purpose?

But that's not all!

They're made from recycled silver and are described as "ethically sourced."

Meg also wore a rather significant necklace during her International Women's Day speech.

via: Edge of Ember

It's a gold pendant by brand Edge of Ember.

It has a clover and a number seven.

Meaning it's designed to be a good luck charm. Hey, Meghan probably needs it to fight the trolls!

Meghan wore these at the Endeavour Fund Awards at Mansion House, in London last Friday night.

The snake hoops are designed by Roxane First.

The brand prides itself on being for "independent women."

It's a brand with heavy feminist leaning, too.

It's described as the "the go-to site for the independent woman building her own legacy, piece by piece, occasion by occasion."

At the same event, Meghan wore a bracelet, too.

And you better believe the bracelet also had a message behind it...

The bangle is designed by Jessica McCormack.

And many were quick to point out how many of Meghan's jewelry choices were from British brands.

Could this be a subtle patriotic nod?

The brand is again sustainable, showing Meg's eco-consciousness, too.

She wore this pendant by Sophie Lis.

And it bore a message of lurve.

The French translates to "Every day I love you more, more than yesterday less than tomorrow."

Harry is one lucky guy!

And the same day, she rocked some gold earrings.

Again, they were by brand Edge of Ember.

via: Edge of Ember

Not only does she always look flawless, but she manages to promote positive messages when doing it. Fancy more royal fashion inspiration? Scroll on for every time Kate Middleton recycled her outfits. We stan an outfit repeating queen!